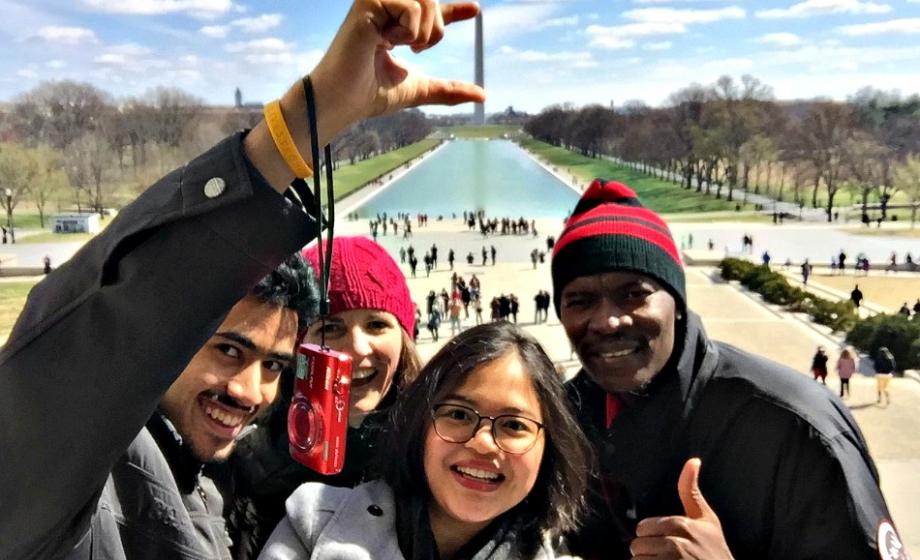 Emmanuel Aghado, a graduate student from Nigeria, and sophomores Galal Al-Meslemi of Yemen and Mya Juliet Kyaw of Myanmar explored the fundamentals of advocacy. They also gained insights into the workings of a congressional office, learned about current political trends as they relate to NAFSA’s legislative priorities, and shared information with lawmakers about the impact of international education on their campus and local community.

The group spent the first day in Washington learning how to advocate for immigration reform, more opportunities for study abroad (through the) and increased public support for international students. The next day included visits to the offices of Sen. Elizabeth Warren, Sen. Edward Markey and Congressman James McGovern, where the students shared concerns and urged action.

“Advocacy Day presents our students with a valuable opportunity to have their voices heard and to engage face-to-face with elected representatives and staff about issues that matter most to them. International students often feel that, since they cannot vote in the United States, their voices don’t count. This experience teaches them otherwise.”

“The Advocacy Day experience was one of the best experiences in my life,” wrote Aghado, MSIT ’18, who is studying for a master of science in information technology. “In three words: fun and formal. Not only did we tour around the institutionalized monuments … with awe, but also, we had to formally advocate for something that influences us all.

“Championing the value of international students and scholars, Paul Simon Study Abroad Foundation Act, and the Bridge Act were the three issues of which we spoke in favor” at their meetings, Aghado continued. “And while the staffers of these lawmakers were all already on the same page with us, they still were welcoming and curious to hear our stories as international students.”

Kyaw, who majors in economics and international development and social change, said she wanted Congress to show better support for international education because it builds strong relationships between countries.

“Back in the day, Myanmar was closed off and we didn’t have good relations with the United States,” she said. “But once students like me study in the United States, we learn that we share many things in common and our understanding of the American people change.”

This is the fifth year that students have joined the ISSO at NAFSA’s Advocacy Day.

Funding for this experience came from the Office of the Dean of the College, the Dean of Students Office, the Political Science Department, the School for Professional Studies, and Clark’s Student Council.

NAFSA was founded in 1948 as the National Association of Foreign Student Advisers to promote the professional development of U.S. college and university officials responsible for assisting and advising the 25,000 foreign students who had come to study in the United States after World War II. In May 1990, the membership formally renamed the organization NAFSA: Association of International Educators.