TCKs are challenged daily to explain their looks, language, culture, ethnicity, nationality, and so on. And this can be a good thing. Why? Because they become very skilled at explaining, exploring, understanding and accepting differences — in themselves and others.

TCKs, also known as Global Nomads, are a fast-growing segment of the world’s population whose birthplace, passport country, parents’ race or residences, schooling, and even language might all be different. So, answers to seemingly simple questions like “Where are you from?” are almost never simple.

TCK identity can be “muddled up,” says Farah Weannara, a Clark fifth-year, M.B.A. student and chair of the 5th Annual TCK/Global Nomads Conference at Clark University (Feb. 25). This year’s theme: Navigating the World with Evolving Identities.

Clark University students launched their first TCK Conference in 2013, and each year it draws dozens of participants from around the region, esteemed keynote speakers, and professionals from the School for International Training Graduate Institute, based in Vermont. This year’s keynoter was Anh Vu Sawyer, executive director of Southeast Asian Coalition of Central Massachusetts, who describes herself as a “daughter of the world.” Sawyer, also an author and recipient of numerous awards and honors, left Saigon as a college student — from atop the American Embassy rooftop in 1975, hours after the fall of Saigon.

Weannara co-led a conference session with Francisco Borges-Rivera ’15 titled “Visualizing Your Social Self,” where she spoke about the complex national influences on her own identity: Thailand (her father is Thai); The Netherlands (her passport country and where her mother, who is Dutch resides — and where Weannara also has been mistaken for a refugee); India (school); Malaysia (school); Vietnam (school); France (school); and of course, the United States, where she came to study at Clark in 2012.

“After years of organizing and presenting in the conference, I have realized there will always be one thing that makes it so special,” Weannara said. “The small-world atmosphere and content of the conference has always given people comfort, ignited an interest in the subject, and allowed for life-changing connections. I am incredibly proud to have been a part of shaping what will continue to be an amazing event.”

The 2017 conference co-chair was Clark sophomore Kaiomi Inniss, who presented a session titled, “The Beauty in the Madness: The Advantages of a Complex Identity,” along with Ashleigh Nongogo ’19. To read Nongogo’s recap of the day’s events, visit her post at the Things That Matter blog, hosted by the International Students and Scholars Office (ISSO).

Past conference chair and Clark senior Santiago Deambrosi (Argentina, Honduras, Uruguay, Colombia, and the United States) gave a how-to workshop for those who might start a TCK group at their campuses. He presented case studies, articles, infographics and video.

Many conference goers shared their experiences dealing with the discomfort of being different: having to move often, saying goodbyes to friends and loved ones, losing language skills, and the chore of fielding misdirected and sometimes even ignorant inquiries. Still, participants seemed to agree over all that their multilingualism, world travel, ethnic and racial diversity, and ability to adapt combine to form the positive TCK qualities of which they’re proud.

A young woman from the Rhode Island School of Design, who studies visual languages, said her TCK experience has become her “greatest tool. … It has probably been the greatest thing my parents ever gave me — and one of the most important things I can give back.”

Global nomads become fine diplomats, said Teja Arboleda, a 1985 Clark alumnus who was the 2016 conference keynote speaker and joined the alumni panel this year. Joining him on the alumni panel were Maisha McCormick ’13 and Michino Hisabayashi ’15, as well as Worcester Polytechnic Institute (WPI) 2016 alums Simon Escapa Otani and Sakshi Khurana.

A faculty/staff panel included Amanda Connolly, associate director of the International Students and Scholars Office (ISSO) at Clark, which sponsors the conference, and Colleen Callahan-Panday of WPI. 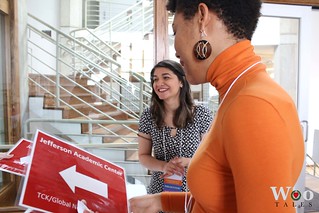 As Arboleda attended a presentation this year, he expressed his pride in the student organizers’ efforts and the continuing success of the Clark conference. “I think it’s interesting that students from a number of different states attend,” he said. “There’s certainly a big need for it, and Clark students have figured out a way to fill that. They’re proactive. They’re so in love with this because it means something to them to be building community for people who don’t always have community. It’s a tricky thing, solidarity across oceans. This is proof that solidarity can be reached.”