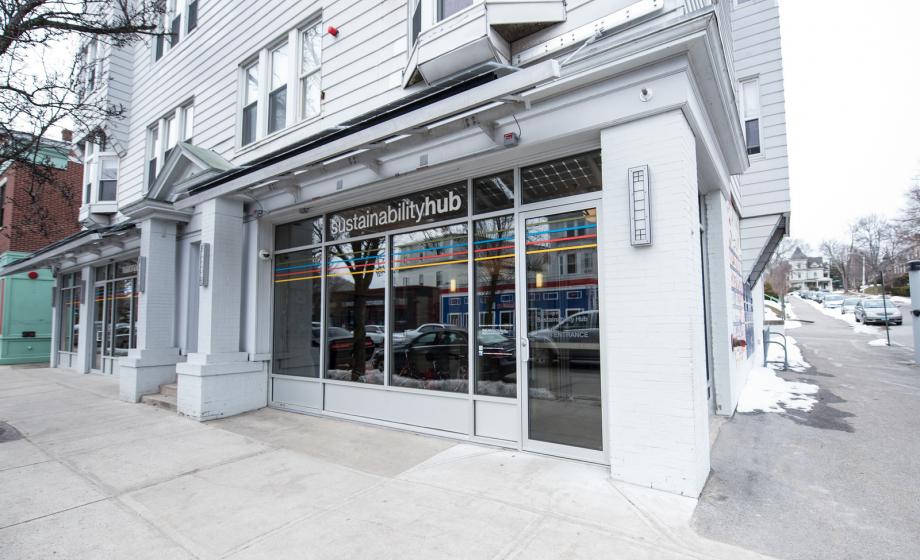 National Grid, in partnership with Clark University and the City of Worcester, announced the recent installation of the first Massachusetts solar awning system, and celebrated the success of the National Grid Sustainability Hub, located at 912 Main Street, on Friday, March 24.

The Sustainability Hub is a center for innovation and community engagement, hosting more than 8,000 visitors since opening in 2013. It serves as a “hands-on display of our priorities,” said Marcy L. Reed, president of National Grid of Massachusetts.

The solar awning’s semi-transparent photovoltaic modules are mounted atop the exterior of the buildings large street-facing windows. The awning is a small-scaled model serving primarily to demonstrate the technology. Inside the facility, visitors can see special displays about the system. According to National Grid, the awning offsets about 15 percent of the Hub’s electricity use; helps reduce use of air conditioning; serves as an educational tool for area students; and showcases flexible integrated energy building solutions where rooftop space is unavailable.

“Clark University has linked its future to the success of the neighborhood and the community we are a part of here,” said President Angel. He lauded the successful partnership between Clark and National Grid, and spoke about the University’s decades-long efforts in community revitalization, housing and education. “There are other dimensions that mark a successful and thriving community, neighborhood and city, and those include the environmental sustainability of our communities and also the health of our communities. All of these issues interrelate.”

President Angel noted that at Clark open houses for admitted students, “I always get questions on how Clark supports students to connect them with things they are passionate about in their lives and help them establish a pathway to a great job, and this partnership is the first example I always cite about how these two things can come together.”

City Manager Augustus praised the partnership between the city, its education institutions, and National Grid. He went on to outline some of Worcester’s latest energy efficiency initiatives, including plans for building “the largest solar farm in New England.”

“Worcester is a leader not only in green power, but in brain power,” Augustus said. “Thank you to National Grid, Clark, and WPI for showing the way.”

Several National Grid staff, including Sustainability Hub manager Emily Albertson (a 2016 graduate of Clark’s Environmental Science and Policy program) and Clark student interns, were on hand to provide tours to event visitors. Since opening, 21 Clark students have held internships at the Hub, with eight going on to become full-time National Grid employees.

National Grid is an electricity and natural gas delivery company that connects nearly 7 million customers to vital energy sources through its networks in New York, Massachusetts and Rhode Island. It is the largest distributor of natural gas in the Northeast. National Grid also operates the systems that deliver gas and electricity across Great Britain.