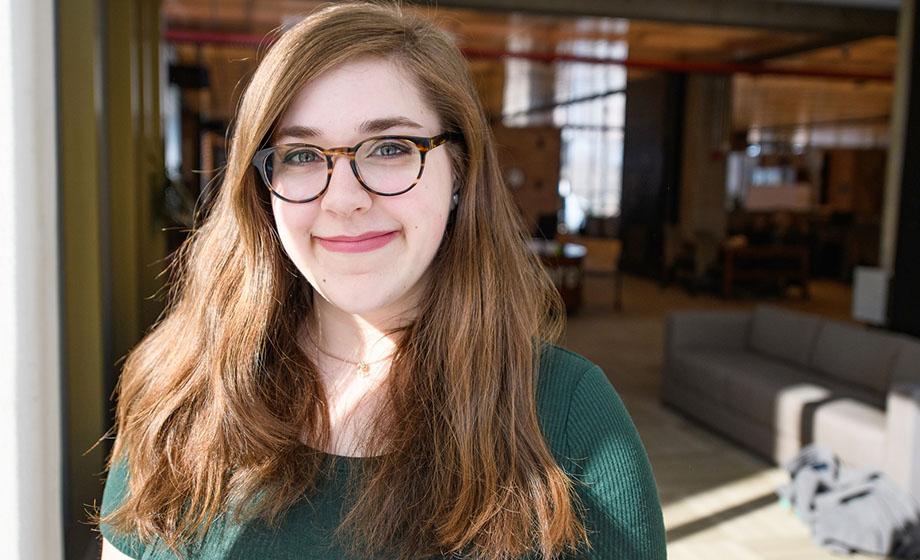 If you’re a student of physics, you might understand the abstract concepts behind Heisenberg’s Uncertainty Principle of quantum mechanics or Einstein’s General Theory of Relativity, which describes gravitation. But if you’re an English major, you might think about the words “uncertainty” or “gravity” in a more poetic sense. They are, after all, words found in Shakespeare’s sonnets.

That is, unless you’re Sarah Wells ’17, a Clark University student who combines a passion for literature, language and writing with a love of science.

Wells is exploring those diverse interests in an interdisciplinary honors thesis titled “I Don’t Quite Follow … : An Introduction to Problematic Academic Linguistics,” working with English Professor James Elliott. She will be presenting a poster about her research at Clark’s Academic Spree Day on April 26.

“My thesis looks at the ways in which different areas of academia communicate — among themselves and to others,” Wells says. “Having had one foot in the sciences and one foot in the humanities throughout my time at Clark, I’ve noticed some very interesting similarities between the two areas that, I fear, are often disregarded by both sides.”

She also got the chance to combine her interests through an internship last summer at the Smithsonian Science Education Center in Washington, where she worked as a digital science writer. The center has offered her a freelance opportunity this spring and summer.

“They have provided me with amazing opportunities to gain experience in many different forms of science writing and communicating,” she says, including researching and writing articles for the center’s STEMVisions Blog and writing pieces for an elementary and middle school textbook curriculum. Wells’ blog articles have explored everything from “The Beauty and Science of Snowflakes” to “Why Do Squirrels Bury Nuts? (and Other Mysteries).”

Wells is a testament to interdisciplinary studies. She entered Clark with the idea to study English, but her plans changed after she took “Introduction to Physics” her first semester.

“Choosing what to study at Clark has, without a doubt, been a personal journey,” says Wells, who comes from Montpelier, Vermont. “I had always enjoyed physics in high school, but after taking the intro course at Clark, I realized that I couldn’t not incorporate physics into my studies in some way. I loved the subject too much to abandon it.”

She credits instructor Louis Colonna-Romano for encouraging her to continue studying physics. “When I talked to him about whether my dream of a physics minor was plausible or a pipe dream,” she recalls, “he encouraged me unwaveringly to pursue it, and that decision has made a world of difference.”

Wells ended up majoring in English and minoring in physics and computer science, with a concentration in computational science — something she hopes will someday help her become a science writer and communicator for outlets like Smithsonian Magazine or PBS’s “NOVA.”  She’s also interested in applying to graduate school.

“One thing I’ve really appreciated at Clark, and have found within all of the three areas I study, is the dedication of the faculty and the tight-knit community of students that form around them. Professors are always ready and willing for students to come in and have a conversation with them about anything that might be on their minds. That kind of support has been extremely beneficial to me throughout my career at Clark.”

Her thesis connects all of her interests.

“I’m arguing for a common academic language through the use of figurative language,” she says. “This kind of shared academic language can function not to dilute research and communication in either field but rather to build a bridge between different fields and allow for constructive criticism and interest to flow openly among all of academia.”

She cites how physicists Leon M. Lederman and Christopher T. Hill, in their book Quantum Physics for Poets, use the example of a glowing-red toaster to explain the otherwise confusing concept of “ultraviolet catastrophe.”

“Through the toaster analogy, Lederman and Hill are able to bring quantum physics straight to the reader — into their very homes even,” Wells says.

Outside of her research, Wells is involved in activities with the English Department, which named her “Most Outstanding Rising Senior English Major.” She serves as senior representative to English Department Chair Lisa Kasmer, and as president of the student-run Caesura literary magazine, Wells organized a contest with her editorial board to solicit entries for the spring 2017 issue, titled “Love Trumps Hate: Writing the Resistance.” The contest calls for students to write short stories, poems and essays about the country’s current political climate. Meanwhile, she and three fellow students held a forum during the English House’s recent open house for participants to use a literary lens to discuss the impact of the Trump administration.

“Clarkies are some of the most passionate people I’ve ever met, and living in that kind of community has been exhilarating,” Wells says.

She’s especially thankful for the support she has received from advisers in her three disciplines: Kasmer; Arshad Kudrolli, physics professor and department chair; and Kenneth Basye, a visiting faculty member in computer science.

“They’ve all been supportive of the unorthodox combination of topics I’ve chosen to study,” she says. “One thing I’ve really appreciated at Clark, and have found within all of the three areas I study, is the dedication of the faculty and the tight-knit community of students that form around them. Professors are always ready and willing for students to come in and have a conversation with them about anything that might be on their minds. That kind of support has been extremely beneficial to me throughout my career at Clark.”