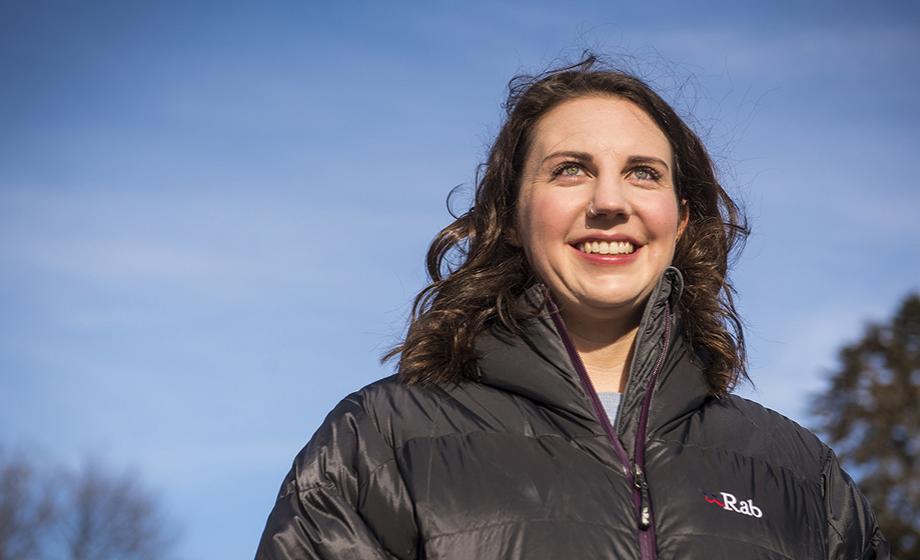 Glaciers can seem fairly straightforward: they’re large, move slowly and when global temperatures rise, they melt. However, Ashley York, a geography doctoral candidate at Clark University, is discovering the icy behemoths’ relationship to climate change is more nuanced and complex.

She’s mapping terminus, or frontal, positions of tidewater glaciers in two bays on the west coast of Greenland with her adviser Karen Frey, associate professor of geography. York hopes her research will provide a deeper understanding of what we already know about sea-level rise and government policy about climate change.

“Our work shows that some of the glaciers on the west coast of Greenland, some located even within the same fjord, have been behaving differently despite being subject to similar changes in atmospheric and oceanic temperatures,” she says. “We hope this work will identify not only some of the drivers that may be unique to each glacier, but also some of the predictability of their future behavior.”

Clark’s long history and reputation in geography drew the Reno, Nevada-native to Worcester. She had used Clark Labs software like IDRISI (now TerrSet) while completing a bachelor’s degree in geography at the University of Nevada, Reno. As a master’s degree candidate in applied geospatial sciences at Northern Arizona University, she participated in the International Summer School in Glaciology hosted through the University of Alaska, Fairbanks with Alex Gardner, former professor in the Clark Graduate School of Geography.

York spotted Frey’s call for a graduate student research assistant on a listserve and came to Clark excited to work with the geographer on remote sensing and field work in Greenland. “[Frey’s project] was exactly what I was looking for,” York says, adding she was also excited her geography doctorate would be “coming from a program as reputable as Clark’s.”

After arriving on campus, York discovered a welcoming community of fellow graduate students with varied interests and possibilities of interdisciplinary research.

“We all know geography is a broad field with interests ranging from architecture and urban planning, to racial justice, and conservation biology to name a few, and somehow, we all get along,” she says of her cohorts. “This also makes the classroom experience with your colleagues one I believe to be truly unique to Clark, where there is just such a variety of viewpoints being integrated into each discussion.”

York embraced Clark’s world-class research and fieldwork opportunities, which included a two-week trip to Greenland in 2014 colleagues from the University of Washington, Woods Hole Oceanographic Institute and Wheaton College.

The team worked on a National Science Foundation project investigating the influence of sea-surface variability on ice sheet mass balance and outlet glacier behavior. They braved temperatures as low as -40 degrees Celsius and flew to multiple sites on the Greenland Ice Sheet and two nearby ice caps on Disko Island and Nuussuaq Peninsula. The team drilled ice cores and took snowpit samples — small scoops of snow taken from about 2 meters below the surface that allow for higher resolution sampling than what would be at the top of an ice core — that York later traveled to the National Ice Core Lab in Colorado to image and process. She later analyzed the samples using ion chromatography in Wheaton College’s chemistry lab.

“I have been lucky enough to take part in each of those steps and see an ice core from start to the finished data product,” she says.

York also considers herself lucky to work with Frey, an esteemed geography researcher who’s also highly regarded in her subfields of biogeochemistry and oceanography.

“Karen is an amazing scientist, and I really look up to her for that,” York says. “It has been great to rely on my adviser for more than just purely scientific and dissertation advice, but also for real-life advice particularly around being a female in the geosciences.”

While York believes she’ll ultimately work in academia, she’s interested in postdoctoral research positions within the government or at a private research institute after she completes her degree in 2018. She remains focused on how her research may influence what we currently know about climate change.

“Climate change is probably the most important environmental, social and political issue my generation will face, so I’m happy my work can contribute knowledge about future changes in some small way,” she says.