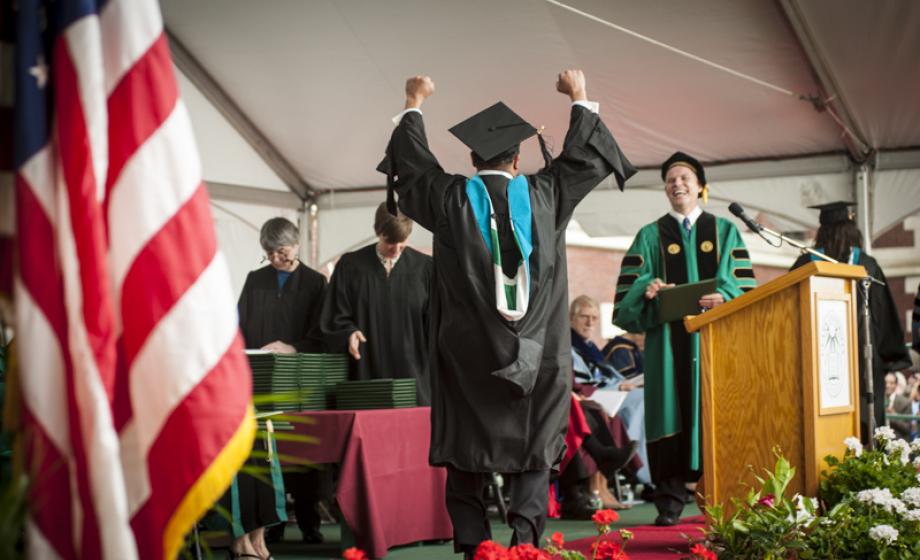 The 113th Clark University Commencement will be held on Sunday, May 21, on the Jefferson Academic Center Green. The procession from the Kneller Athletic Center will begin at noon, followed by a University-wide ceremony.

This year’s commencement speaker is Dr. Earl Lewis, president of The Andrew W. Mellon Foundation. Under his guidance, the Foundation has reaffirmed its commitment to the humanities, the arts, and higher education by emphasizing the importance of continuity and change.

Previously, Dr. Lewis served as Provost and Executive Vice President for Academic Affairs and as the Asa Griggs Candler Professor of History and African American Studies at Emory University. A noted social historian, Mr. Lewis has held faculty appointments at the University of California at Berkeley (1984–89), and the University of Michigan (1989–2004). He has championed the importance of diversifying the academy, enhancing graduate education, re-visioning the liberal arts, exploring the role of digital tools for learning, and connecting universities to their communities.

During the Clark Commencement ceremony, Lewis will receive an Honorary Doctor of Humane Letters degree. The University will also confer honorary degrees upon the following individuals:

Mark Bittman is a food journalist, author and former columnist for The New York Times. He served as lead food writer for the NYT Sunday Magazine, becoming the country’s first food-focused Op-Ed columnist for a major news publication. He has authored 20 acclaimed books, including the “How to Cook Everything” series and The New York Times’ number-one bestseller, VB6: Eat Vegan Before 6:00. Bittman also has starred in four television series, including Showtime’s Emmy-winning Years of Living Dangerously. He was a distinguished fellow at the University of California (Berkeley), a fellow at the Union of Concerned Scientists, and is a member of the faculty of Columbia University’s Mailman School of Public Health. He is a Clark alumnus, graduating in 1971 with a degree in psychology.

Linda Greenhouse is the Joseph Goldstein Lecturer in Law and Knight Distinguished Journalist-in-Residence at Yale Law School. After four decades as a reporter for the New York Times, Greenhouse now contributes a bi-weekly op-ed column on the Supreme Court and law. She has received numerous journalism awards, including a 1998 Pulitzer Prize in beat reporting and the Goldsmith Career Award for Excellence in Journalism from Harvard University’s Kennedy School. Greenhouse recently authored, “The U.S. Supreme Court: A Very Short Introduction,” as well as a biography of Justice Harry A. Blackmun. She is a member of the Council of the American Academy of Arts and Sciences, and is president of the American Philosophical Society, the first woman to serve in that position in the society’s 274-year history.