The biology beneath the ice 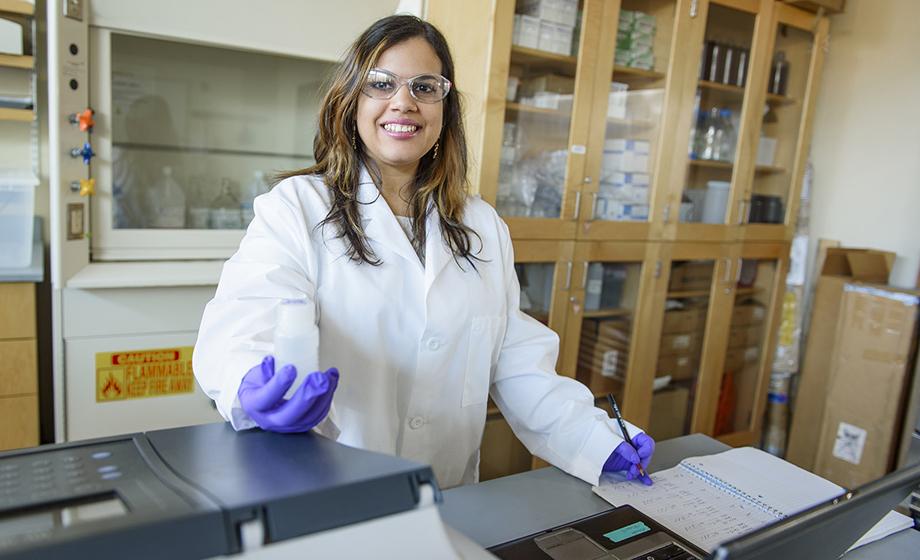 Clark University doctoral candidate Melishia Santiago grew up with palm trees and warm weather near sunny Atlantic beaches in Florida and Puerto Rico before coming north to Massachusetts for college. Now, she spends her time thinking about ice, specifically how climate change impacts sea-ice extent in the western Arctic Ocean.

Santiago is researching the effects of sea-ice extent, or how much of a given space is considered ice covered, on the biology and biogeochemistry in the ocean water column in the Bering, Chukchi and western Beaufort seas of the Pacific Arctic Region along Alaska’s coast. She’s looking at how a material called colored or chromophoric dissolved organic matter (CDOM) distribution is impacting sea-ice extent.

In the Arctic Ocean, dissolved organic matter results from the decay of phytoplankton, or microscopic marine plants, by photosynthesis on ocean surface waters or when land-derived organic matter is transported by rivers to coastal areas. CDOM, the fraction of dissolved organic matter you can see in natural waters, absorbs light and affects heating and light distribution in the ocean water column, the conceptual column of water from surface to floor. For example, NASA compares it visually to when color and tea leaves leach from a teabag into hot water. Light absorption converts degrading dissolved organic matter into inorganic material. It then releases carbon dioxide into the atmosphere.

“If current climate trends continue, later-summer sea ice is expected to disappear in the next decades in the Pacific Arctic Region,” she says. “This can have profound consequences on the biology and biogeochemistry of marine ecosystems.”

Santiago, who came to Clark to study with Professor Karen Frey, completed a bachelor’s degree in biology in 2008 and a master’s degree in geography in 2011 from the University of Massachusetts, Amherst. While here, she was able to conduct more extensive fieldwork last summer aboard the Canadian icebreaker Sir Wilfrid Laurier.

After she earns her doctorate in 2018, Santiago plans to complete post-doctoral study and secure a tenure-track position at a four-year research university — aspirations she attributes to studying at Clark.

“My education here has helped prepare me for my next endeavor, and to continue to study sea-ice extent and the biogeochemistry of marine ecosystems,” she says.