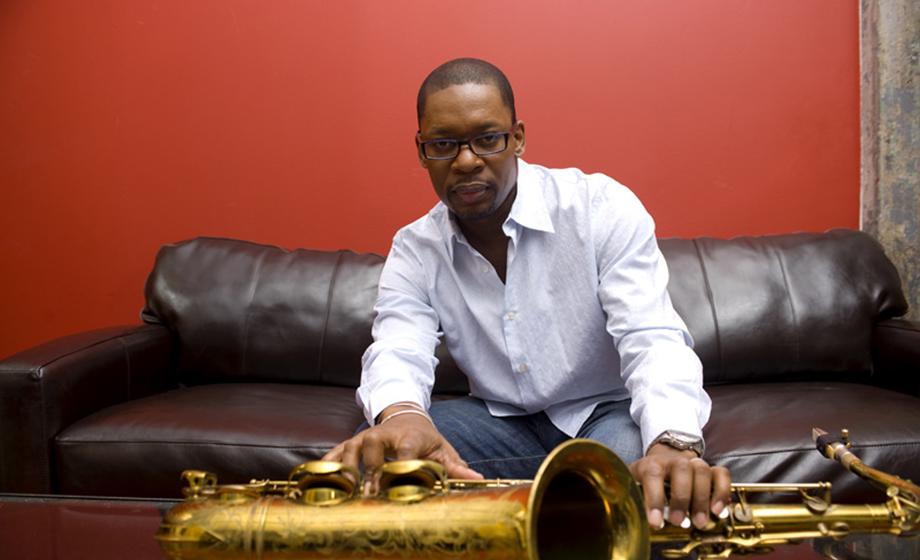 Critically acclaimed saxophonist, bandleader, and composer Ravi Coltrane is the featured artist for the 2017 Geller Jazz Concert and recipient of the 2017 Selma B. Geller Foundations of Jazz award. The concert will take place Wednesday, March 29 at 7:30 p.m. in Razzo Hall, Traina Center for the Arts. Tickets, which are $25 for general admission or $10 with a Clark I.D., are available online.

In the course of a 20-plus year career, Mr. Coltrane has established a stellar reputation as a both a headliner and sideman to many, and founded a prominent independent record label, RKM. This year’s concert will feature the Ravi Coltrane Quartet with special guest Joe Lovano plus the Ravi Coltrane Sextet.

Born in Long Island, the second son of John and Alice Coltrane, Ravi was named after Indian sitar legend Ravi Shankar. He was raised in Los Angeles where his family moved after his father’s death in 1967. His mother was a significant influence on Ravi and it was he who encouraged Alice to return to performance and the recording studio after a long absence. Subsequently, Ravi produced and played on Alice Coltrane’s powerful “Translinear Light,” which was released in 2004.

Contrane has released six albums as a leader. His latest, “Spirit Fiction,” was released in June 2012 for the Blue Note label. Additional credits include performances as well as recordings with Elvin Jones, Terence Blanchard, Kenny Baron, Steve Coleman, McCoy Tyner, Jack DeJohnette, Matt Garrison, Jeff “Tain” Watts, Geri Allen, Joanne Brackeen and The Blue Note 7 among others. He is a co-leader of the Saxophone Summit with Joe Lovano and Dave Liebman.

Coltrane lives in Brooklyn, N.Y. and maintains a fast-paced touring, recording, composing and performance schedule. He leads the effort to restore the John Coltrane Home in Dix Hills on Long Island and presides over important reissues of his parents’ recordings.

Since the late 1980s, Lovano, an American post-bop jazz saxophonist, alto clarinetist, flautist and drummer, has been one of the world’s premiere tenor saxophone players, earning a Grammy Award and several mentions on Down Beat magazine’s critics’ and readers’ polls.