In Spratt Lab, students learn ‘science is not a race, it’s a journey’

On the first floor of Clark’s Arthur M. Sackler Sciences Center, behind a locked door in a darkened room, sits a $2 million scientific instrument that chemists routinely use to analyze the purity and chemical structure of molecules. It’s a nuclear magnetic resonance (NMR) spectrometer – a giant magnet enclosed in a 10-foot-high silver canister. Rarely found outside of larger universities or research institutes, the NMR spectrometer is one of the main reasons why Donald Spratt joined Clark University’s Gustav H. Carlson School of Chemistry and Biochemistry in August 2015.

This high-field NMR spectrometer is a vital tool for Spratt and his students to conduct biochemical research that could have implications for future medical treatments involving chemotherapy drug resistance, childhood kidney cancer, Huntington’s disease, viral infections and abnormal fetal development. Outside of academic research, most people might encounter such technology in hospitals, which use magnetic resonance imaging (MRI) to create detailed pictures of a patient’s body for diagnosing physical ailments. MRIs use the principles of NMR and its methodology.

“Honestly, I couldn’t be doing the research I’m pursuing without the NMR spectrometer,” says Spratt (above left, with undergraduate students), assistant professor of chemistry and biochemistry and Carl J. and Anna Carlson Endowed Chair in Chemistry. “At Clark, there are three NMRs, similar to what you would find at a much larger university. They’re readily available for us to conduct our research. And that’s invaluable.”

Spratt is a protein chemist and structural biologist who studies ubiquitin, a protein that earned its name because it is “ubiquitously” found in almost all tissues of eukaryotic organisms and is involved in regulating almost every biochemical pathway in the human body. His novel research program at Clark focuses on understanding how HECT E3 ubiquitin ligases properly attach ubiquitin to other proteins using NMR spectroscopy.

“We want to understand the fundamental processes of how these enzymes work,” he says. “That’s where all these great leaps forward in drug development can happen.”

Since arriving at Clark, Spratt has welcomed numerous undergraduates — including 14 students this academic year — to join his research team. Each student chooses a protein to express, purify and characterize using the University’s top-of-the-line scientific equipment.

“Each student gets their own protein to study and develops their own research project, with the ultimate goal of becoming a co-author on papers published in scientific journals,” Spratt explains.

Scientists discovered ubiquitin in 1975. In the 1980s, a research team from Israel and the United States — Aaron Ciechanover, Avram Hershko and Irwin A. Rose — “figured out that ubiquitin was a molecular ‘kiss of death’ that the cell attaches to proteins it wants destroyed,” according to The New York Times. In 2004, the three won the Nobel Prize in Chemistry for their “discovery of ubiquitin-mediated protein degradation.”

Several years ago at an NMR conference in Australia, Spratt listened to the keynote address of an influential NMR spectroscopist who laid the groundwork for his work: Kurt Wüthrich, who won the 2002 Nobel in Chemistry for “his development of nuclear magnetic resonance spectroscopy for determining the three-dimensional structure of biological macromolecules in solution.”

As part of the next generation of scientists, Spratt is using NMR spectroscopy to study the underlying mechanisms that the HECT E3 ubiquitin ligases use to control the proper attachment of ubiquitin to specific proteins in the cell. Ligases create chemical bonds between molecules, in this case between specific lysine residues on a target protein and ubiquitin. 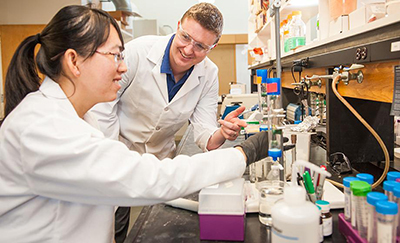 “There are 28 HECT E3 ubiquitin ligases in this family of enzymes encoded in the human genome. Four have been studied really pretty well; the other ones we don’t know much about. And all of them have disease relevance, which is why it is so important to understand how each of these enzymes work,” Spratt says.

Many scientists study HECT E3 ubiquitin ligases using X-ray crystallography, a universal structural technique to determine the static arrangement of atoms in a molecular structure. To examine this family of enzymes, Spratt’s research team is employing both NMR spectroscopy and X-ray crystallography.

“Crystallography is an excellent method to get a static snapshot of a protein structure, while NMR gives us the ability to look at the dynamics of a protein in solution,” Spratt explains. “By combining these methods, we can see the parts of the protein that are static and in motion, both of which are important to fully understand how these proteins do their job in the cell.”

Knowing how the HECT E3 ligases work and behave, he believes, can lead to better targeting of drugs to treat certain diseases associated with HECT E3 ubiquitin ligase dysfunction.

Recently, for example, Spratt was involved in a discovery as a research associate in the lab of Gary Shaw, professor and Canada research chair in structural neurobiology at the University of Western Ontario, in collaboration with Zhen-Qiang Pan, a cancer biologist from the Icahn School of Medicine at Mount Sinai. Using a high-throughput drug screen of drugs already approved by the U.S. Food and Drug Administration, their international collaborative team discovered that the drug suramin — which previously had been used only for treating African sleeping sickness — also has anti-tumor activity by inhibiting a key E3 ubiquitin ligase complex that controls cell division. The Proceedings of the National Academy of Sciences U.S.A. published the findings last April.

Because Spratt’s research is so closely linked to such advances in biochemical research, he was attracted to Clark University and Worcester’s proximity to the booming biotech hub of Boston. And because Clark is a small research institution focused on teaching, he saw an excellent opportunity to involve undergraduates in his laboratory, giving them the chance to study these HECT E3 proteins.

“I have them delving into the fundamental biochemistry of this family of enzymes,” Spratt says.

Students’ research has implications for cancer, other diseases

Last summer, he supervised 10 undergraduates to work full time along with two graduate students in his lab. The undergrads received funding through Clark scholarships and fellowships such as Traina, LEEP, the Interdisciplinary Summer Research Program and the James and Ada Bickman Chemistry Research Award.

To identify which protein each wanted to study, “I had them read scientific journals and search through the online data repositories we have in our field.”

All the students continued their studies in Spratt’s lab this academic year, pursuing honors theses or individualized study on their proteins of interest.

“The students overexpress their protein in bacteria, purify the protein, then they characterize their protein with different biochemical and biophysical methods with the top-of-the-line equipment we have here at Clark,” Spratt explains.  “We can study the secondary structure of the protein, look at the protein’s thermostability, measure the activity of the enzyme using various assays, and we can use the NMR spectrometer to examine the protein’s structure and dynamics.”

“Once you understand a protein’s mechanism, you can design better drugs, which can be used in future cancer treatments.”

Such lab experience can give undergraduates a competitive edge in pursuing their future careers, according to Spratt.

“This experience shows you are capable of mastering complex scientific skills in a research lab,” he says. “It shows that you are able to delve deeper into a certain topic and become an expert in one area. And it shows that you’re willing to follow something through to the end. It really opens a lot of doors if you’re applying for scholarships, going to graduate school or working in industry or other science labs.”

“Once you understand a protein’s mechanism, you can design better drugs, which can be used in future cancer treatments,” says Ogisu, who plans to apply to medical school. “I want to go into oncology. This lab experience will give me a better understanding of why and how a cancer cell develops.”

Meanwhile, Janel Gardner ’17 works on a protein called HACE1 that is involved in the Golgi membrane fusion in the cell. Problems with HACE1 can lead to Wilms’ tumors, the most common type of childhood kidney cancer, as well as neurological disorders such as Huntington’s disease.

“HACE1 is found in pretty much every cell in your body, so it’s very diverse and there are a lot of different proteins it can interact with,” she says. “Scientists don’t quite know everything that HACE1 is involved with yet.”

A biochemistry and molecular biology major, Gardner hopes to join a science lab after college. She’s appreciated learning how to use sophisticated scientific equipment like a high-speed centrifuge and the ÄKTA pure 25L fast-performance liquid chromatography (FPLC) system to purify proteins.

“Professor Spratt told us that having experience on the ÄKTA pure FPLC looks great on your resume and would give you a competitive edge in the biotechnology job market,” she says.

“Pinky brought up a really good idea,” Spratt says. “AREL1 inhibits apoptosis, or the normal death of cancer cells. This can possibly lead to chemo-resistance in the cell. If you’re able to inhibit AREL1, you can potentially make a cancer cell that is more sensitive to chemotherapy drugs.”

Htun spent much of the summer purifying her protein and collecting data on the NMR spectrometer to determine the resonance assignments for each atom in her protein. “It’s like a puzzle and you’re putting all the pieces together,” she says.

Htun hopes to publish her findings in a scientific journal. “If you do a PubMed search on my protein, there are only three papers on it,” she says. “No one has ever seen this data before.”

To help keep his students motivated and moving forward with their projects, Spratt always reminds them that “science is not a race, it’s a journey. Good science requires planning ahead, being tenacious and steady, and staying with it on a daily basis.”