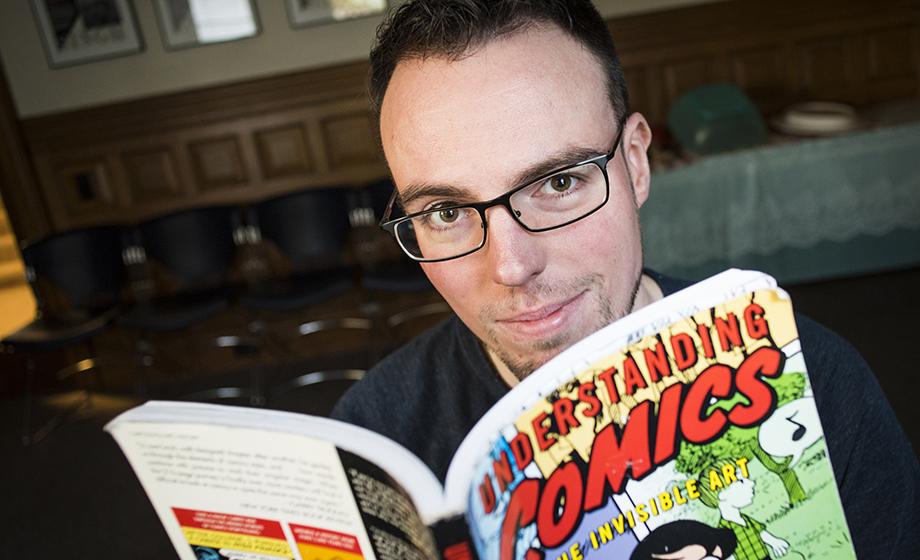 Winslow — a graduate exchange student from Johannes Gutenberg University in Mainz, Germany, where he is also a master’s candidate in American studies — is researching how comics and their narratives present a culture’s perspective on the world, specifically in coming of age stories involving trauma and adolescence. He earned a bachelor’s degree in American studies from the German university in 2014, and used his undergraduate thesis work on finding American identities in comics as a springboard for his graduate research work with thesis adviser Esther Jones, assistant professor of English.

Winslow says contemporary comics document public attitudes toward non-white Americans in words and pictures. “Not only do they teach us how to identify prejudice and generalization when we hear them, but also when we see someone act on them,” he says.

Comics, like Lynda Barry’s “One! Hundred! Demons!” and Craig Thompson’s “Blankets” weren’t always Winslow’s passion. However, after discovering the genre during his third undergraduate semester, he found them more relatable than other forms of literature.

“My time at Clark has taught me to listen more and more closely to what people outside of literary studies and social criticism say, but also to communicate more understandably about what I know — and want others to know about.”

“I struggled throughout adolescence to find purpose to what I was doing or where I was heading,” he says. “My research is important because I want others to realize that those ‘funny pictures’ are more than just gags and punchlines. They act as critical commentary on issues of society as well.”

It’s this perception, of comics being considered “low-brow, simple pulp fiction,” that he hopes to change with his research.

“English as a subject usually focuses on literature as the ultimate form of expression, and defines it as ‘high art,’” Winslow says. “Comics, on the other hand, have been traditionally considered to be for mostly children and adolescents: for those not yet able to understand classics of literature.”

While the perception of comics among some scholars and publishers has changed in recent years, there are still critics who don’t see the frames as worthy of examination.

“With my research, I want to help upend this stereotype and show that comics are on equal footing with literature.”

Clark’s community, especially the English Department he calls his second family, has proven valuable to providing him with new perspectives on his topic.

“Because Clark’s graduate students are a very diverse and international lot, you get to know all kinds of characters,” he says. “This in turn helps you to see the world in more than the colors you know from home.”

After graduation, Winslow hopes to continue working in community management or in an editorial position, but says his time at Clark — including Professor SunHee Gertz’s input on navigating academia — has improved him as a scholar and made him more prepared for his future endeavors.

“My time at Clark has taught me to listen more and more closely to what people outside of literary studies and social criticism say, but also to communicate more understandably about what I know — and want others to know about,” he says.