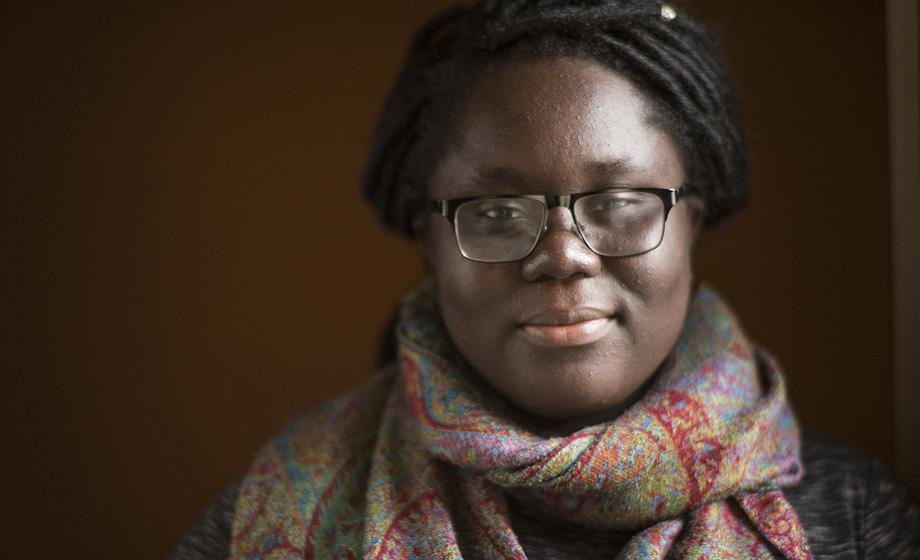 Clark University English master’s degree candidate Ama Bemma Adwetewa-Badu considers herself to be a part of what she studies, her work resonating with her personal experience.

Adwetewa-Badu, a Worcester resident, researches avant-garde, experimental Black diasporic poets specific to West Africa, America and the Caribbean.  Along this vein, some of her most recent work has examined Robin Coste Lewis’ “Voyage of the Sable Venus” and Ama Ata Aidoo’s “Our Sister Killjoy.”

She cites a personal “crossroads” that include her native Ghana, the American culture in which she grew up, and “other various nexuses, such as gender and class, in which I participate. The sociological aspects of my own being coupled with a profound love for poetry and the black diaspora have encouraged and fueled my research.”

Adwetewa-Badu’s current research stems from an undergraduate course, “Hybrid Poetics,” that she took while a student at the Massachusetts College of Liberal Arts and which introduced her to an experimental aesthetic in poetry. “I was really excited by the unthreading of ‘traditional’ poetry. I was introduced to writers who merged poetry and prose, sound and textuality, art and words. Their work showed me that the avant-garde tendency toward experimentation and disruption was still quite alive in contemporary poetics,” she says.

Upon enrolling at Clark, Adwetewa-Badu signed up for Associate Professor Stephen Levin’s course “Fictions of Empire: Studies in Global English Literature,” which exposed her to “another dimension of experimentalism — that which exists in post-Colonial countries and the diaspora.”

Her thesis, “Iterations of Identity: Black Diasporic Poetics and the Politics of Form,” examines how experimental texts create what she calls “a rejection of closure, allowing for debates on identity and cultural solidarity in overlapping moments of de-colonization and desegregation.” Adwetewa-Badu hopes her work will contribute to a deeper understanding of avant-garde texts in the black diaspora.

Being able to examine texts from the lens of identity is one of the main reasons she chose Clark for graduate school.

“When I looked at graduate programs, I knew I wanted to be a part of an English department that would allow me to work with poetry and identity construction,” she says. “I chose Clark because of the English Department’s diverse range of areas of study, small cohort and the amount of customization available to students.”

The other reason was Clark’s small size, which she says fosters a camaraderie among students and faculty that benefits both her academic and personal lives.

“Everywhere I look, I see people who are really invested in their scholarship,” she says. “Because Clark has such an immense wealth of international diversity, I’ve been able to learn about new places through other graduate students.”

Adwetewa-Badu appreciates the mentor-mentee relationships she’s formed with her adviser and thesis reader, Levin, along with fellow thesis readers Assistant Professor Esther Jones and Associate Professor Meredith Neuman. They have helped her put together an individualized course of study and figure out the steps necessary to pursue a doctorate in English.

“They constantly encourage me to think of new things, and they give me much appreciated conversation on the arguments I’m formulating,” she says.

Thanks to funding from Clark’s Graduate Student Council, last spring, Adwetewa-Badu traveled to Atlanta to attend the African Literature Association Conference, and this spring she plans on attending the Northeast Modern Language Association Conference in Baltimore. She credits the English Department’s introductory course, “Introduction to Graduate Studies,” with helping her prepare for such academic pursuits.

“I can’t even begin to recount all the ways in which that course began my process toward becoming a scholar,” she says, adding that it introduced her to abstract writing, among other important skills. “These are all things I need to know as I progress.”