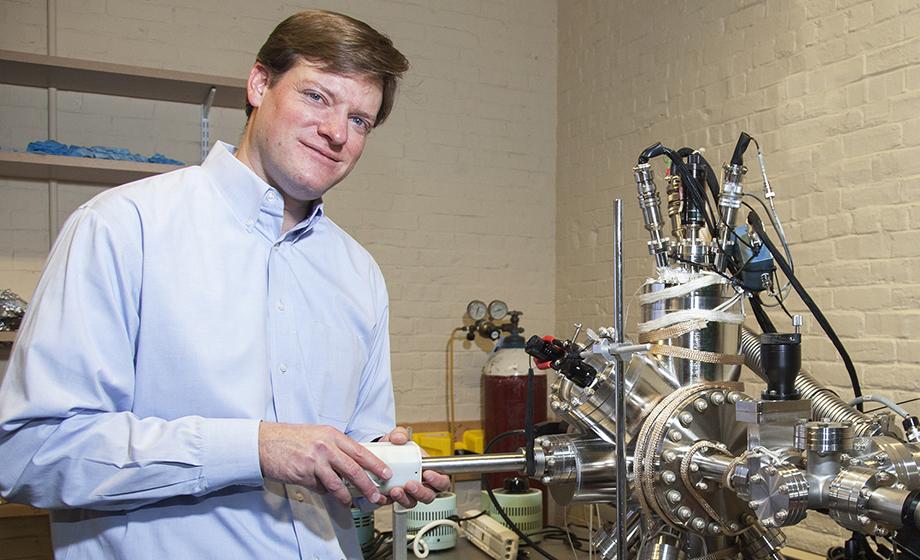 Over the past few years, the world has experienced a severe shortage of helium, a by product of natural gas extraction. And although vast amounts of helium recently were discovered in Tanzania, helium is still a finite resource on Earth.

For that reason, helium is expensive. Most people might not worry about paying more for the helium gas to fill balloons, but they might notice if MRIs (magnetic resonance imaging) used in health care become even more cost prohibitive. Liquid helium is used for cooling superconducting magnets for MRIs and nuclear magnetic resonance (NMR) spectrometers, as well as conventional superconductors.

Enter Michael Boyer (pictured at top), assistant professor of physics at Clark University, and his research team of undergraduate and graduate students, whose research on high-temperature superconductors was published recently in the journal Physical Review Letters.

Boyer is well-aware of the impact of the helium shortage on superconductors, MRIs and other scientific equipment. When he was a Ph.D. student at the Massachusetts Institute of Technology in the mid-2000s, he and others used helium to run daily scientific experiments. It cost about $6 a liter; now it’s $18.

“Back then, we spent $50,000 to $100,000 a year just to cool our instruments, and these are the same types of expenses that hospitals have to incur to cool their MRIs,” Boyer explains.

That’s ideal because superconductors have multiple applications beyond MRIs. They can be used for levitating trains above tracks (check out this “maglev” train at the University of Oxford), powering cities with high-efficiency electric generators and running NMRs for biotech experiments to identify drugs to fight cancer and other diseases.

Boyer’s research occurs at the most fundamental level of physics, using a scanning tunneling microscope to image the atomic structure of materials and examine their electronic properties. In particular, he’s examining cuprate high-temperature superconductors, which reach up to minus-220 Fahrenheit, versus the minus-414 F of conventional superconductors. They’re called “cuprate” because the material compounds involved contain copper complexes.

Boyer hopes that his team’s basic research and that of other scientists might someday lead to a “holy grail” discovery. His co-authors include Unurbat Erdenemunkh ’13 and Brian Koopman ’12, who worked in his lab as undergraduates, and Ling Fu, a doctoral student currently working there. Erdenemunkh is now home in Mongolia, applying to doctoral programs in physics in the United States and elsewhere; Koopman is a graduate student in the Cornell University Department of Physics.

“We think this is a small but important step into the understanding,” Boyer says, “but we think there is much more work to be done.”

“It’s been 30 years, and there’s still a lot we don’t know,” Boyer says. “But I’m optimistic, because the first conventional superconductor, mercury, was discovered in 1911. And it wasn’t until 50 years later that we had a microscopic understanding. If we want to create materials with even higher superconducting transition temperatures, we need to understand the underlying physics of these materials.”

“One way to figure out how something works is to try to break it, similar to how a child takes apart a toy to understand how it operates,” he explains.

“In addition, contrary to previous conclusions,” he explains, “we find that the superconducting state, while weakened, is not completely destroyed even at the impurity sites.”