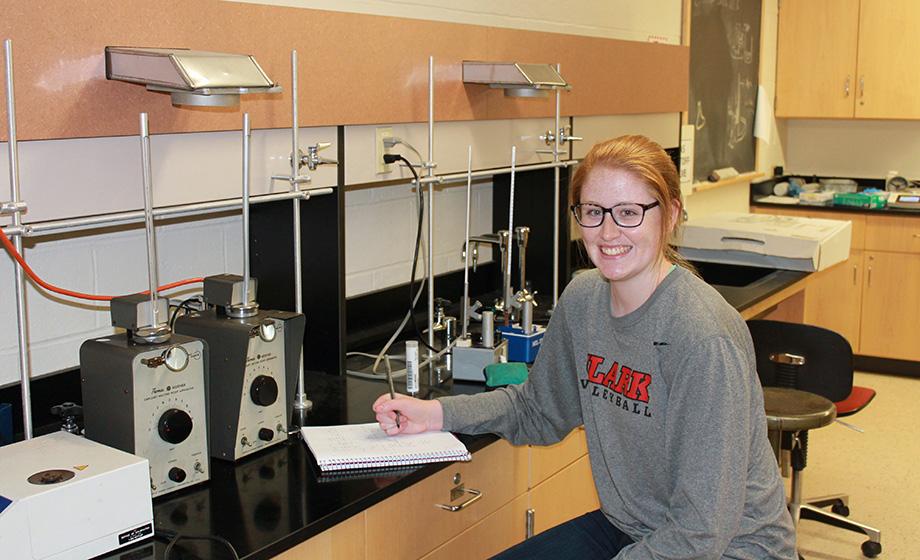 Courtney Pharr ’17 is no stranger to acing a test or a serve, and this week she was honored for her ability to do both with remarkable consistency.

Pharr was named an Academic All-American and selected to the College Sports Information Directors of America Volleyball third team. It’s just the fourth time in Clark University history a student-athlete has received this honor.

“This is an incredible honor for Courtney and a credit to her relentless determination to be the best student-athlete she can be,” said Mickey Cahoon, women’s volleyball head coach. “Courtney has truly been an ambassador for Clark and our program throughout her four years here and I am proud to have had an opportunity to work alongside her.”

After receiving more than 500 national volleyball student-athlete nominations, the selection committee whittles the list to 53 members of an academic all-district first-team — a place Pharr advanced to in 2015. Then, a panel of select sports information directors from around the country considered those 53 nominees’ accomplishments before voting to place 18 student-athletes on first, second or third teams to make up the 2016 Academic All-America Division III class.

To be eligible, a student-athlete must be nominated by the school’s sports information director, be a starter or key reserve, maintain a cumulative grade point average of 3.30 on a 4.00 scale, and hold at least sophomore athletic and academic standing at his or her institution.

A biology major on the pre-med track who minors in bioinformatics and public health, Pharr sports a 3.99 grade point average and was an integral part of this year’s historic volleyball season. She started all 33 matches as the Cougars advanced to their second consecutive conference title match and appeared in their first-ever NCAA Tournament. Once there, the team won a thrilling 3-2 match over Montclair State with Pharr contributing five kills and five block assists.

During her career, she played in 115 matches, finishing with 632 kills, 149 assists and 161 total blocks. Her 166 service aces rank second on Clark’s all-time list.

“It’s fantastic to have such an academically talented and dedicated student who can also juggle the rigors of starting on an NCAA tournament-level team,” said Professor Mark Turnbull of Clark’s Carlson School of Chemistry.

Pharr holds a lengthy list of academic honors. She earned a prestigious LEEP Scholarship, given based on academic merit, service and leadership, and has made First Honors on the Dean’s List six times. Earlier this year, she earned the David Potter Award for Excellence in Biology, which is given to the senior biology student for outstanding academic achievement, and the Kenneth A. Senter Endowed Award, given annually to pre-med students on the basis of high academic standing.

Earlier this week, she was one of eight members of the volleyball team named NEWMAC Academic All-Conference — her third such selection.

In addition to Pharr’s outstanding athletic and academic achievements, she has given countless hours to on- and off-campus community service projects. She serves as president of the University’s Student-Athlete Advisory Committee and is a member of the University’s Athletic Board.

Pharr twice spent a portion of her winter break on the Clark Athletics Service Learning Trip, traveling to Loma Linda, Guatemala, in 2014 and El Cidral, Dominican Republic, in 2015. During each trip, she and other student-athletes used sports as a tool to effect change and help children.

Her academic pursuits have led to several internships. Last summer, Pharr completed clinical rotations in several disciplines, including emergency medicine, at Bellevue Hospital in New York City, and, in 2015, she conducted research at the University of Washington’s Neurological Surgery Summer Student Program in the Center for Integrative Brain Research at the Seattle Children’s Research Institute.