‘Stay true to who you are’ 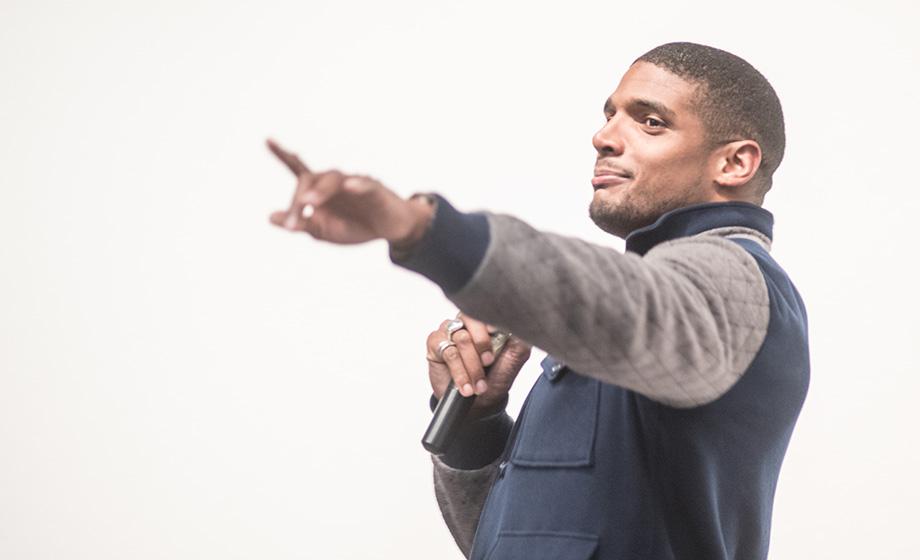 Michael Sam is poised, mature, and comfortable in his own skin.

He should be. As the first openly gay player to be drafted by the National Football League, the 26-year-old has already endured more attention and adversity than a person usually encounters in a lifetime. The Clark University Speaker’s Forum brought Sam to campus on Nov. 29. He stood in Jefferson 320 in front of hundreds of people, at times choking back tears as he told the story of his life — one filled with so many highs and lows you’d think it was pure fiction.

He grew up in Hitchcock, Texas. His mom had eight children — five boys and three girls — one of whom drowned in a nearby lake before he was born. When Sam was 5 years old, his oldest brother Russell was fatally shot. Three years later his brother Julian — the “glue” that had held his family together — went missing and is believed to be dead.

Sam’s parents’ marriage dissolved, and when they separated, his two older brothers were left in charge of the family. The two bullied and abused Sam; one even burned his hand with an iron. Sam started to spend the majority of his time away from home when his mother was away, out of fear. He admitted that he and his sister celebrated when his older brothers, who were involved in gangs and drugs, were sent to jail.

“I went through so much adversity in my life and I triumphed every single time. God’s testing me to see how strong I really am. I’m walking in quicksand. It’s slowing me down, but it’s not going to stop me.”

With his home in turmoil, school became his safe haven. Sam served as a water boy for Hitchcock High’s varsity team, and eventually discovered his athletic talent on the football field.

“I was fast ’cause I had to run from my brothers,” he joked.

When Sam realized that he might have the opportunity to be the first son in his family to go to college, he got serious about his studies. He attended the University of Missouri on scholarship, and was named a consensus All-American and the Southeastern Conference Defensive Player of the Year his senior year.

It was in college that Sam recognized and explored his attraction for members of the same sex. He went to great lengths to disguise his relationship with Vito Cammisano, a member of the school’s swim team. The summer before his final season at Missouri, Sam attended a Pride Parade in St. Louis, and found comfort in the crowd. He made a bold decision to come out to his teammates on the first day of training camp.

“I was tired of living a lie,” he said. “I didn’t give a damn anymore; I was comfortable.”

Several months before the 2014 NFL draft, the young athlete, on the advice of his publicist, revealed his secret on ESPN’s popular program “Outside The Lines.” Sam had told his parents he was gay via text message just days prior. The news, which happened to be delivered on his dad’s birthday, was the final blow to his already strained relationship with his father, who reacted by denouncing Sam’s lifestyle publicly in the press.

Sam first suspected his public admission of his homosexuality might have impacted his standing in the 2014 NFL Draft. After a long, excruciating day of waiting, he was picked in the seventh round by the St. Louis Rams. Upon hearing the news, Sam celebrated by sharing a televised kiss with his then-boyfriend Cammisano. The kiss became The Story.

“The media didn’t do me any favors,” he said, recalling the fallout. “They were focusing on the wrong things. It was very frustrating to deal with that.”

As football fans and the general public considered whether Sam’s presence on the team might cause a distraction, the media firestorm made sure of it.

The Rams released Sam at the end of training camp despite his being one of the leaders in sacks in the NFL preseason, and he spent time on the Dallas Cowboys practice squad before being waived. He signed with the Montreal Alouettes of the Canadian Football League in 2015 (he was the first openly gay player to compete in the CFL) but later quit the team.

Sam’s bravery was recognized several times the year he came out to the world. He received the Arthur Ashe Courage Award at the 2014 ESPY Awards, was named one of GQ’s Men of the Year in 2014, and was a finalist for Sports Illustrated’s Sportsman of the Year. He was later chosen to compete on ABC’s popular “Dancing with the Stars.”

These days, Sam is resigned to the fact that his football career is over. He is focusing on forgiveness — of his dad, his brothers, the NFL and himself. He finds sharing his story, and his work as an activist for LGBT rights and his involvement in anti-bullying campaigns fulfilling and therapeutic. His message to the Clark audience was clear: stay true to who you are and be an advocate for others.

“We have some scary times ahead if we don’t stick together,” he said, acknowledging that the LGBT community could benefit from more allies in the wake of recent political developments.

“I went through so much adversity in my life and I triumphed every single time. God’s testing me to see how strong I really am,” he said. “I’m walking in quicksand. It’s slowing me down, but it’s not going to stop me.”

Above: Michael Sam, the first openly gay player drafted into the NFL, speaks at Clark University on Nov. 29.