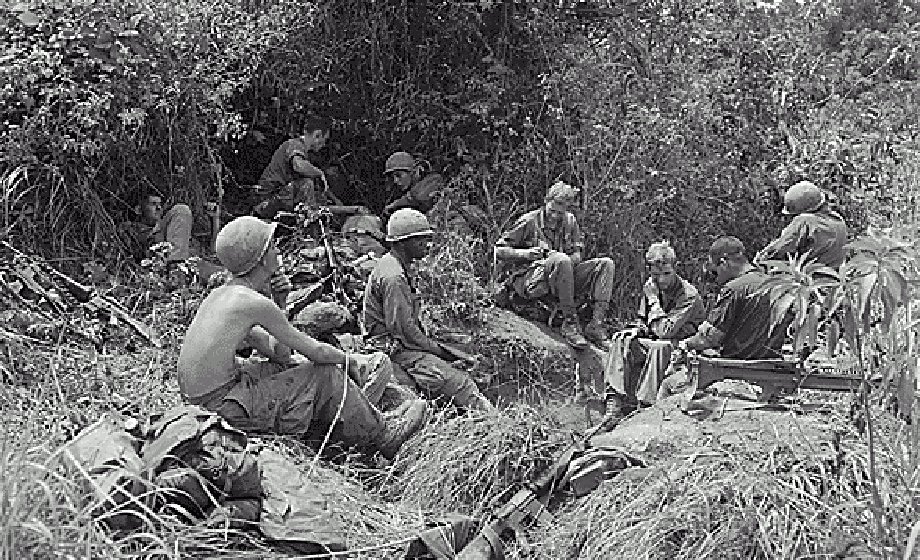 “I didn’t set out to make this film at all,” Soren Sorensen told the audience at the Nov. 9 screening of his documentary, “My Father’s Vietnam.”

Sorensen, a visiting lecturer in the Clark University Visual and Performing Arts Department, would go on to describe the experience of bringing to life the story of his father, Peter Sorensen, and two of his friends who were killed in Vietnam.

Sorensen’s inspiration for the documentary came from his childhood visits to the Vietnam Memorial in Washington D.C. There, he saw his father make pencil rubbings of two names: Loring “Ring” Bailey Jr. and Glenn Rickert. The film blends interviews with friends and family members of the men with never-before-seen photographs and 8mm footage shot by Sorensen’s father to illustrate the burdens so many carry from a war that ended over 40 years ago.

The film Sorensen didn’t intend to make was born from a decision to sit down and finally ask his father about Vietnam. He planned to make an audio recording of the conversation “just for posterity.”

“My friend [director of photography, Dan Akiba], in his infinite wisdom, said, ‘Well, why don’t we shoot it.’ I called my dad, who agreed. It really was about collecting this interview. My father sat for five and a half hours talking about the Vietnam War for longer than he’d talked about it since 1970.”

In an essay for The Independent, Sorensen wrote, “My father was not closed off or emotionally unavailable to me. He would have answered my questions if I had bothered to ask them. But the Vietnam War always felt like a terminal illness. We just didn’t mention it. I didn’t ask and he didn’t tell.”

The panel discussion following the Nov. 9 screening reflected the difficulty people had with even asking about the war.

“I think a lot of people want to imagine their fathers or their grandfathers in the best possible way as having done something, if not heroic then something very glorious, during their time at war,” said Jerry Lembcke, associate professor of sociology at The College of the Holy Cross and a Vietnam War veteran. “It’s kind of an image they don’t want to have shattered. They don’t really want to know what dad or granddad did, and so that might steer them away from the questions that really need to be asked.”

Another panelist, veteran John Wilson, recalled that, like Sorensen’s father, he hadn’t shared his stories until he was interviewed for “My Father’s Vietnam.”

“In retrospect, if Soren hadn’t contacted me I never would have gone to the Phoenix VA [Veterans Affairs] and I never would have started to open up with people. This was the can opener, right here,” he noted, pointing to Sorensen. “I felt very at ease with him, I don’t know why. But it just worked. It was the right thing for me at the right time.”

Audience members asked the men how best to ask veterans to share their stories.

Sorensen acknowledged broaching such a private and sensitive subject can be difficult, but humility is important. “What you’re doing is asking to learn, and you leave that in their hands. If you approach the subject matter with humility and respect, the worst that can happen is they say no.”

Also serving on the panel were father and son Rik and David Carlson. Rik is featured heavily in the documentary speaking about Ring, his brother-in-law, and about his own involvement in the anti-war movement. David, an Iraq War veteran and coordinator of Student Veteran Services at the University of Vermont, spoke about his experiences in combat and upon returning home.

“If we make that decision to go to war, it’s not something that we should take lightly, that we should brush off or do haphazardly without the understanding that the fundamental aspect of fighting a war is fighting — and it’s uncomfortable to talk about because fighting means killing,” he said, “I don’t know how anyone can do that job with a full heart and not come back a little bit differently.”

Sorensen concluded by noting the universality of his film’s message. “As personal as the film is, I think that my family’s story is not at all uncommon,” he said. “This isn’t just my father’s story or my story. It’s everyone’s story.”

“My Father’s Vietnam,” won the Soldiers and Sacrifice Grand Prize at its world premiere at the 2015 Rhode Island International Film Festival (RIFF) and the Best Picture (Documentary) at the 2016 Flagler Film Festival in Florida. It was recently released on Blu-ray, DVD, and multiple Video-On-Demand platforms including iTunes and Amazon.

Photo at top: Soldiers take a break from jungle fighting in June 1969 during the Vietnam War. (National Archives photo)