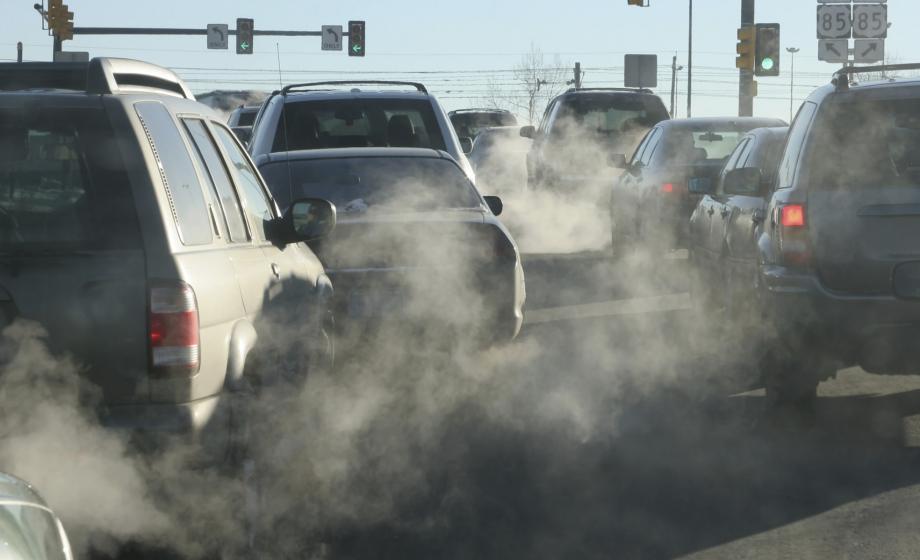 When Leo Breton ’85 was getting ready to apply to colleges, he already knew he was going to major in physics. His mother suggested he check out Clark University because of its links with Robert H. Goddard, “the father of modern rocketry.”

Clark was the only university to receive Breton’s application.

It’s fitting, because Breton has been called the “grandfather of mobile emissions testing.” The system he invented was used to uncover a massive scandal in the automobile industry:  Volkswagen’s widespread cheating on emissions standards.

As a mechanical engineer at the Environmental Protection Agency in 1995, Breton oversaw the lab that performed emissions and fuel economy tests on automobiles. He wondered whether the simulations conducted in a controlled environment could ever match the results in real-world conditions. To find the answer, Breton would have to build his own system. So he did.

“The challenge was to measure a moving vehicle with the same accuracy” as a lab’s heavy, expensive and enormous equipment, he says. The system he came up with fits in a car’s trunk or back seat. The Realtime, On-road Vehicle Emissions Reporter, or ROVER, comprises multiple inventions, and measures exhaust flow and emissions without having to modify the vehicle.

“Exhaust flow rate is difficult to measure because it changes rapidly all the time,” Breton explains, so he designed an exhaust flow meter that hooks onto the tailpipe. He had a hunch he could adapt a liquid measurement device to measure the vehicle exhaust flow rate in real time. It required a lot of work to adapt, but was very successful. He holds the patents on the flow meter and system technologies, now called the Portable Emissions Measurement System (PEMS), which is available from two manufacturers. The commercial systems of today operate exactly as Breton showed in his seminal patents.

In the mid-1990s, Breton’s invention led to the discovery that some auto manufacturers and heavy-duty engine manufacturers had installed software devices the government considered “defeat devices,” which reduce the effectiveness of a car’s emissions-control system on some vehicles. The auto manufacturers paid settlements totaling over a billion dollars. One of the cases was the largest settlement ever reached under the Clean Air Act prior to the discovery of the Volkswagen defeat device in 2015.

That year, Volkswagen admitted to selling 11 million vehicles worldwide with defeat devices to fool emissions tests. The ruse was discovered by a team of scientists from West Virginia University using Breton’s ROVER technology.

To date, Volkswagen has agreed to a $15 billion settlement with the government, but that’s just the initial cost since it doesn’t include civil penalties or the myriad class action lawsuits. A criminal case is pending, and more fines for clean air violations are likely. This should mean the end of intentional emissions cheating, Breton says. “I can’t believe anybody would go there again after this one.”

If you’re a physics major at Clark, you have to show up to class, and you can’t hide because the classes are small. You really have to know what’s going on.

Breton has been hunting for solutions to major problems since his Clark days. During his senior year, he was tapped to figure out why the University’s new cogeneration plant was not operating at capacity.

He had a pretty good idea where the problem was. “I would walk through campus every day and see steam billowing off of the cooling tower on the roof of the library. I was no expert, but it seemed to me no one would design a cooling tower to constantly vent that much steam. That’s exactly what I told the Physical Plant managers when they explained the problem to me but we agreed it would have to be rigorously proven.”

Gary Benoit, the instrumentation engineer for the Physics Department, had started setting up a system to track the flow of heat in the plant. “I finished what Gary had done, wrote the software, and got the electronics working,” Breton recalls. “It wasn’t a big feat of engineering by today’s standards but it was pretty advanced back then.”

As soon as the tracking system was running, it was immediately clear that Breton’s hypothesis had been correct: 1 million Btu of heat was being lost through the library’s cooling tower, at a cost of about $50,000 per year. “The plant was recovering about a third less heat than it should have been,” he says. “We got out the blueprints the next day and discovered that it had been plumbed wrong.” The installation error was fixed the next day.

Breton went on to earn a master’s in mechanical engineering at the University of Maryland and spent two years as a research assistant before going to work at the EPA. Breton then put his engineering skills to use at two startups, working on vehicle efficiency and biofuels. He also founded Energy Innovations, developing energy-efficient technologies for appliances, HVAC systems, automotive applications and more.

Today, Breton is a technology development manager in the Vehicle Technologies Office at the Department of Energy, but he’s an inventor and physicist at heart. He just recently sold his patented design for an improved hybrid vehicle powertrain architecture to a Silicon Valley company.

Breton regularly draws on the physics he learned at Clark and the confidence that experience instilled in him. “If you’re a physics major at Clark, you have to show up to class, and you can’t hide because the classes are small. You really have to know what’s going on.”

“There’s always something I’m trying to improve or make,” he says.

Another invention was inspired when he noticed his wife boiling water without a cover on the pot, which is extremely energy inefficient. His device is “an automated system, built into the cooktop,” he explains, which regulates temperature to allow “covered cooking without the inconvenience of boil-overs.”

Cooking without the cover, the energy escapes — like steam from the Goddard Library.

UPDATE: This story was originally published in the fall 2016 CLARK alumni magazine. On Jan. 11, 2017, federal prosecutors announced criminal charges against six Volkswagen executives for their roles in the emissions-cheating scandal. Volkswagen also formally pleaded guilty to charges of conspiracy to commit wire fraud and to violate the Clean Air Act, customs violations and obstruction of justice. The automaker is set to pay $4.3 billion in criminal and civil penalties in connection with the federal investigation, bringing the total cost to Volkswagen in the United States, including settlements of suits by car owners, to $20 billion.