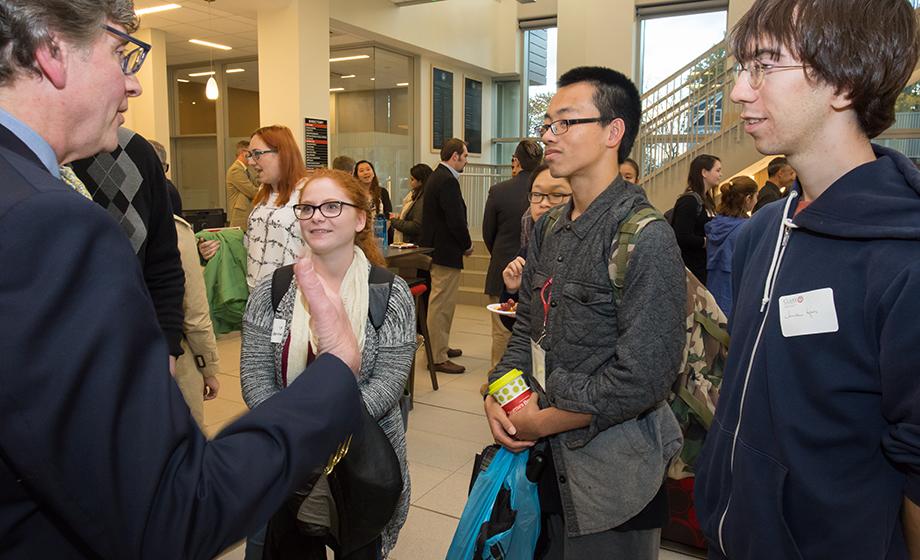 “This has the potential to be big — really big.”

So announced John Baker, professor of biology, as he helped kick off the Nov. 3 event for ClarkCONNECT, the new Clark University initiative that matches students with alumni, faculty, parents and outside partners for career mentorship and professional networking.

ClarkCONNECT communities are being formed this year in six areas: Biology and Biosciences, Law and Regulatory Affairs, Creative Arts, Markets and Business, Psychology, and Health, with additional communities planned. As part of ClarkCONNECT, the University will soon be announcing an online platform to link current students with mentors in fields of interest for support in their college-to-career transition.

The Nov. 3 Biology and Biosciences event, chaired by alumnus John J. Keilty ’91 and biology professors Denis Larochelle and Justin Thackeray, featured two panels of alumni who talked to students about careers in environmental science and biotechnology, detailing their own professional paths and offering advice on making oneself attractive to employers.

The ClarkCONNECT event for Law and Regulatory Affairs was held Nov. 16. Read more about that event.

At the environmental science forum, moderated by Baker, Patrick Bird, M.B.A./ES&P ’12, and Nicholas Rossi ’12, M.S./ES&P ’13, offered a roomful of biology students a look into their professional worlds — Bird as an air quality specialist with the Environmental Protection Agency, and Rossi as a conservation stewardship restriction specialist with Mass Audubon.

After working several jobs that took him from Cape Cod to Portland, Oregon, Bird returned to his native Massachusetts to earn his dual master’s in business administration and environmental science and policy at Clark. He landed his job at the EPA following an internship with the Massachusetts Department of Environmental Protection.

Rossi initially thought he’d attend law school, but an internship doing GIS calculations for the Greater Worcester Land Trust led him in a different direction. He completed his master’s in 2013, then worked at Mammoth Cave National Park in Kentucky and the Massachusetts Department of Conservation and Recreation before he was hired by Mass Audubon as supervisor of the stewardship program.

Bird and Rossi urged the students to pursue volunteer and internship opportunities that will give them a broad range of skills and expose them to different fields of work.

“Variety is key,” Bird said. “I’ve had experiences volunteering and interning when it became clear that this wasn’t what I should be doing — all you have to invest is the time. But if you have a glimmer of interest in something, then you can take the next step.”

The panelists stressed the need to build an arsenal of skills that are critical to succeeding in the workplace. Among those are writing clearly and communicating effectively across all levels of an organization, and being able to handle failure, which is inevitable for everyone. Rossi noted he applied to more than 70 jobs before landing his current position.

The alumni all work in Massachusetts’ booming life sciences and healthcare industry, one of the largest biotech hubs in the world, rivaling California’s Bay Area.

“Massachusetts is phenomenal; it’s the epicenter for biotech,” said Larochelle, who reported figures from the Second Annual Economic Development Summit: Developing for the Health and Life Sciences, held Nov. 2 in Worcester. “On a per capita basis, Massachusetts receives the highest level of NIH funding, more than any other state. What that means is there are a lot of opportunities.”

Through ClarkCONNECT, he said, the University is highlighting those career opportunities “not just in Massachusetts as a whole but right here in Worcester.”

Pivorunas, a Vermont native, said she worked in a number of science labs on campus as a biochemistry and molecular biology undergraduate, and faculty like Larochelle helped her feel “at home.” The summer before her senior year, she landed an internship at Abbott Laboratories (now AbbVie). The company offered her a job out of school, even though she had decided to pursue the fifth-year M.B.A. program. She managed to juggle both.

“Being uncomfortable is what makes you successful,” she said. “The truth is, if it wasn’t so difficult, I wouldn’t be so good at what I’m doing now.” After working in biotech for several years, she obtained a Ph.D. in biochemistry from Harvard and returned to AbbVie.

Pivorunas and her fellow alumni advised the audience of science students and peers to be flexible and stay open to new opportunities.

“Expose yourself to as much as you can,” said Keilty, who worked in a research lab at UMass-Worcester and learned to code on the job. He left to join a startup, Millennium Pharmaceuticals, which was seeking scientists who also understood what’s now called bioinformatics, which uses math and computer science to analyze biological data.

The connections he made – and the paths he followed – led Keilty to his career in venture capital. He has long since veered from his original plan to attend medical school and found success in biotech by becoming interested in “things that I never thought I’d be interested in at all, like ‘How do you fund a biotech company?’ I keep finding my passions.”

Following the panel presentations, President David Angel addressed the gathering in the atrium, noting that Clark’s approximately 30,000-plus alumni are an important resource for students as they prepare to launch their post-Clark lives and careers.

Mentorship and professional connections are not only critical, but can be deeply satisfying for both alumni and students, he said, adding that methods for landing a job have changed dramatically over the years. No longer can an applicant submit a resumé and await the call for an interview. Today, strategic network building is a more effective and dynamic strategy for gaining access to the workplace.

As he concluded his remarks, Angel challenged the students to introduce themselves to someone in the room whom they didn’t know — the first step toward establishing a network.