As coach and master’s candidate, it’s all about goals for William Brown 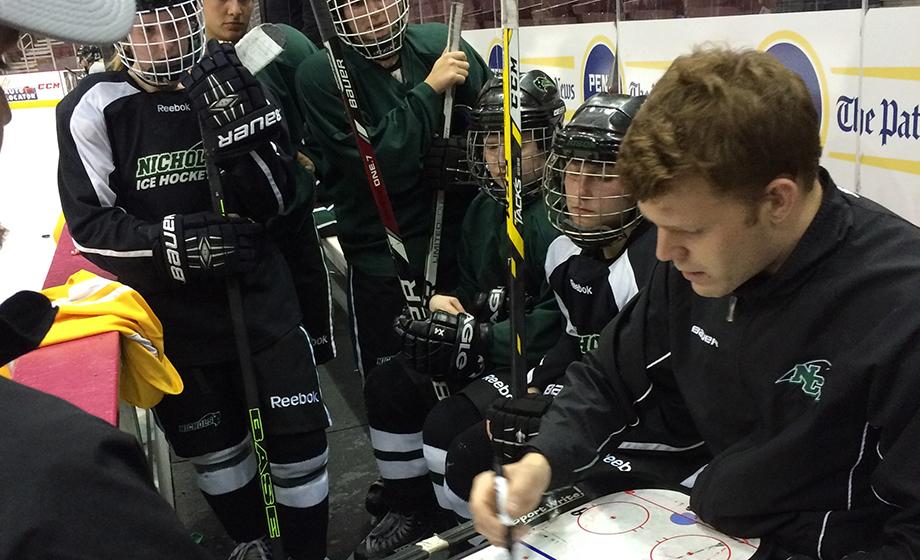 Clark University English master’s degree candidate William Brown loves a good story and has one to tell himself.

Brown, who expects to complete his thesis and graduate in the spring, is also the head women’s ice hockey coach at Nichols College in Dudley. He’ll talk about how his full-time coaching position and intense graduate-level academic work intersect during the English Department’s Chowder Fest on Nov. 9.

The annual event usually features alumni speakers who talk about what students can do with an English degree, but Brown’s unique perspective prompted his adviser, Associate Professor Lisa Kasmer, to extend an invitation a year early.

English majors are welcome to join William Brown, along with Kulani Dias ’13, a doctoral candidate in psychology at Princeton University, and Kate Rafey ’08, M.P.A. ’09, director of development for Music Worcester, at Chowder Fest. The event will be held at 5:30 p.m. Nov. 9 in the Anderson House on Hawthorne Street and is co-sponsored by the LEEP Center, the Office of Alumni and Friends Engagement and the English Department.

“Professor Kasmer and I met a couple times over the summer to discuss my thesis, and we got to talking about the way the program has affected me,” Brown says, noting that it’s enhanced his critical thinking and analytical skills, among others. Kasmer mentioned Brown’s story and work to Professor James Elliott, who thought he’d be a good fit for the event based on his unique path through the program.

“From what I gather, I’m very different than anyone they’ve had speak before, so I’m just generally excited about it,” Brown says.

Brown, who started playing hockey at age 9, earned a bachelor’s degree in English from Nichols College in 2013. While there, he played hockey for four years, serving two years as team captain. Off the ice, he found himself drawn to the Gothic genre and, particularly, Rhode Island-native H.P. Lovecraft’s work.

“His canon is so diverse. You can get Gothic realism, Gothic sci-fi and more,” he says, adding he’s traveled to Providence several times for a Lovecraft walking tour that points out sites significant to the author.

Brown wrote his first graduate-level paper about Lovecraft and is going further for his master’s thesis — an examination of 18th– and 19th-century Gothic literature, specifically the way narratives are gendered through interlocutors and omniscient narrators in Joseph Conrad’s “Heart of Darkness,” Mary Shelley’s “Frankenstein” and a Lovecraft short story. He’s working with Kasmer, Elliott and Associate Professor Esther Jones on the project.

The Clark chapter of Brown’s story began his senior year at Nichols. Professor Jeff Halprin, head of the college’s English Department, suggested Brown would be a good fit for the master’s program.

“He said everyone at Clark is super inquisitive, which hits it right on the nose,” Brown says.

While waiting for a response to his Clark application, Brown also interviewed for his coaching position. He received positive responses to both while attending a Friday class.

While some may not see how both chapters connect, Brown says the verbal and written communication skills he’s learned while analyzing literature at Clark and coaching hockey at Nichols are both valuable and transferable.

“If I don’t articulate my ideas in the proper way, my team isn’t going to understand one ounce of what I’m saying. The language I use now matters so immensely, and it has to be accessible to 30 some odd people,” he says, adding, “clear and concise” communication is key.

He compares the textual analysis he completed for coursework to his analyzing the various perspectives of his players.

“Each individual on the team has a different perspective they’re bringing to the table, and then it’s, ‘How do these perspectives fit together?’ ” he says.

Brown also cites time management, something he tries to impart to his players.

Brown is considering his next career steps, but he’s interested in teaching and feels lucky to already have a full-time job he enjoys.