For ‘Bend it Like Beckham’ director Gurinder Chadha, filmmaking is personal 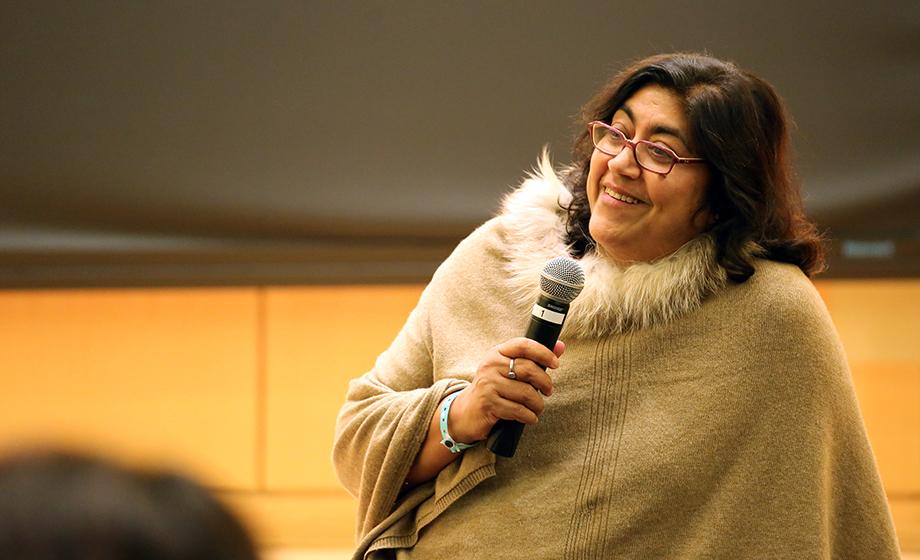 Internationally acclaimed director Gurinder Chadha talked about the need to make films that are historically relevant and fiercely personal during an Oct. 24 “public conversation” with sociology Professor Parminder Bhachu. The event, “Film Making, Creativity, Migrant Biographies, Diasporic Disruption,” was hosted by the Higgins School of Humanities.

Film producer Gurinder Chadha speaks with students during a recent visit to Clark. (Photos here and above by Gillian Rude) Chadha, who has been making films for nearly 30 years, is best known for her 2002 film “Bend It Like Beckham,” which was screened the previous night in Razzo Hall followed by a question-and-answer session with the director. There, she elaborated on the dynamics of creating a film with a strong female lead from a Punjabi Sikh family who defies many norms of that traditional society.

“Viceroy’s House” tells Chadha’s family history. “When I was growing up I had come to understand that partition happened because it was our fault — that we Hindus, Sikhs, and Muslims couldn’t get on with each other,” Chadha recalled. “There was violence and the British had no option but to divide the country. … As a result I had somehow felt that the loss of a homeland was a result of my ancestors’ fault.” Chadha said that when archived historical documents eventually became public, she and her family learned the partition was a political act.

Chadha spent much of 2008 tracing her roots through India and Pakistan to find the house her grandfather had to abandon in 1947 following the partition. “This film is about me taking control of my own history beyond identity and really telling that tickling story from my perspective,” she said.

Much of Chadha’s cinematic work draws on her personal experience of being a “multiple migrant” and dealing with the duality of identity. As a Sikh Punjabi British, she is considered the only director of that ethnicity to be making these films in Britain. Her first film, the short TV documentary “I’m British But …” is the first and only record of the beginning of the British-Bhangra movement in England.

“I always felt I needed to make [these] films for two reasons,” she said. “One was to confront racism and prejudice and to show what living in a culture of fear-around-difference is like. I wanted to find a way to dampen that fear and to show how actually we’re not really that dissimilar. Secondly, I was trying to make a conscious effort to record our history because no one else was doing it.”

During a question-and-answer session, Chadha stressed the importance of film as a storytelling medium, but one that comes with some messiness.

“Film is always a negotiation,” she said. “[It is] a battleground based on perspective. If you’re a storyteller, people want to go on a journey, they don’t want to be hit on the head or forced along the way. I hope when people watch my films, they do that.”

Chadha last spoke at Clark in April 1995. The Oct. 24 event was sponsored by the Office of The President, Office of the Provost, Cultural Studies and Communication, the Strassler Center for Holocaust and Genocide Studies, the Screen Studies Program, and the departments of Sociology, Geography, History, and Political Science through the Chester Bland Fund.