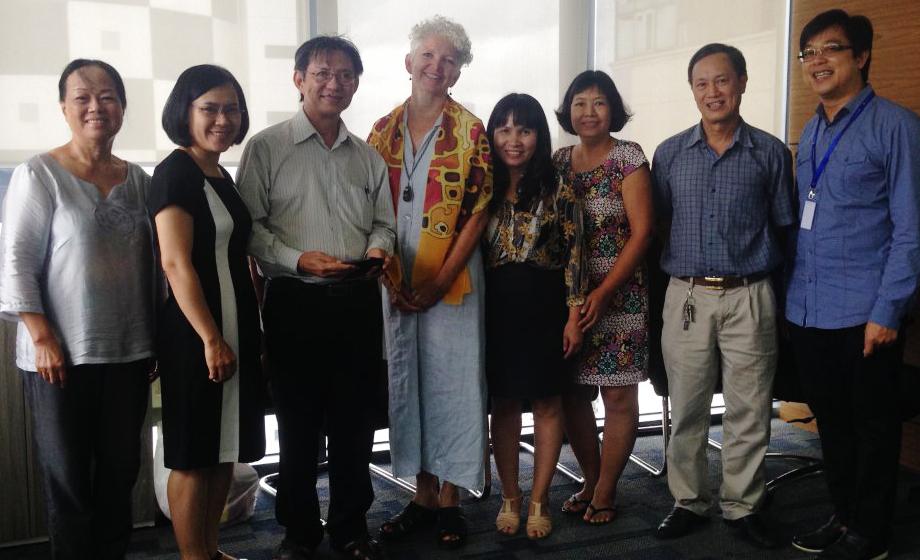 “Reading Raphael in Hanoi,” an article featured in last month’s issue of The Atlantic, contained a prize-winning essay by Vietnamese student Thanh T. Nguyen. In his essay, Nguyen described what he had learned from reflecting critically on Renaissance-master Raphael’s painting “The School of Athens.” What makes Nguyen’s essay unusual is that the liberal education-style reflection and critical thinking it demonstrates have not been part of the traditional Vietnamese curriculum.

About the time that Nguyen’s essay was hitting the newsstands last summer, Clark University’s Mary-Ellen Boyle, associate professor of management in the Graduate School of Management, was serving as a Fulbright Specialist at Vietnam’s Hoa Sen University. During an intensive five-week period, she consulted with the university’s faculty and administrators who are eager to explore the benefits of a U.S.-style liberal education.

Fulbright Specialists undertake short-term, focused assignments where they can deploy their expertise. For Boyle, who served as Clark’s dean of the college from 2012 to 2015 and facilitated the integration of LEEP (Liberal Education and Effective Practice) into the undergraduate curriculum, that expertise was in liberal education.

“I decided to apply to become a Fulbright Specialist in higher education administration because that’s what I’d been doing as dean,” Boyle says. “I became interested in where around the world liberal arts was growing, and how might it change in response to different cultures.”

“Vietnam was the country I was always hearing about. The war was my first experience of international conflict. I always wanted to visit to see what’s happened since. It’s a communist country that’s modernizing at an incredibly fast rate, and the higher education sector has been expanding rapidly, perhaps more rapidly than in other parts of the world.”

Hoa Sen University, a nonprofit institution with several campuses, surfaced on Boyle’s radar for several reasons. An acquaintance of hers had recently served there as Fulbright Specialist in a related capacity, and Boyle saw potential to build on his work. She also learned that two Clark alumni from the international development and social change master’s program were employed at Hoa Sen: Do Thi Thanh Thuy, M.A. ’12, a lecturer in the general education program, and Tran Thi Thanh Huong, M.A. ’07, director of the Center for Service Learning.

Boyle, who had already made one trip to Vietnam, has been fascinated by the country since she was a child growing up in the 1960s and ’70s, learning about the war from nightly newscasts and newspapers.

“Vietnam was the country I was always hearing about. The war was my first experience of international conflict. I always wanted to visit to see what’s happened since,” she recalls. “It’s a communist country that’s modernizing at an incredibly fast rate, and the higher education sector has been expanding rapidly, perhaps more rapidly than in other parts of the world.”

Boyle was pleasantly surprised to discover that news of Clark’s LEEP initiative had already made it to Hoa Sen.

“It turns out that the university’s provost, Loc Pham Quoc, earned his Ph.D. at the University of Massachusetts at Amherst, and is very familiar with American models of education,” she says. “About five years ago, he decided he wanted to incorporate liberal education into the curriculum, and he’s been quite interested in what Clark has done with respect to LEEP. Our alumna, Thuy Do, has been instrumental in bringing liberal education, service learning, interactive teaching methods and her IDSC values to her classes there. I hoped to convey to Hoa Sen faculty some of the excitement I saw in students and faculty at Clark as they began to understand the ambitions of LEEP.”

Although only 25 years old, Hoa Sen University is quite traditional in its focus on producing science, technology and business professionals for the emerging economy. Students are expected to know what they want to study before they even apply, and there is little opportunity to explore the humanities, social sciences or natural sciences. One of Boyle’s challenges was to reassure faculty that a liberal education can coexist with and actually enhance professional training.

She also discovered that official government ideology, which mandated courses in communist ideology and philosophy for all students, made the discussion of liberal education, especially freedom of speech and expression, somewhat sensitive. An important locus of information about liberal education, the website of the American Association of Colleges and Universities, was blocked during her time in Vietnam.

“I couldn’t really argue that liberal arts was for citizenship,” Boyle says. “I could say, in America, this is what we’ve done in the past. This is American-style liberal education. You have to figure out the Vietnamese style, congruent with your values and strengths as an academic institution.”

According to Boyle, while Hoa Sen is expensive to attend, it supports many amenities common to American universities like counseling, student and career services, and student clubs. It’s especially known for its internships. Most classes are taught in English.

“Hoa Sen is similar to Clark in a lot of ways,” she says. “It has strong internship and work placement, and a great reputation for its equivalent of the ‘practice’ part of LEEP.”

To complement those strengths, Boyle sought ways to impart the kind of transferrable knowledge that students commonly acquire through a liberal education, including communication and problem-solving skills, and a basic understanding of ethics and social responsibility.

After first consulting with faculty in each of the different disciplines about their educational needs, Boyle worked with them to identify ways to broaden the rigid curriculum to educate the whole person, not just for a career, but for personal fulfillment.

She modeled innovative teaching approaches in faculty workshops. “I made the workshops very interactive and the participants loved it,” she says. “I taught about student-centered education, which was a revelation to many, and about alternatives to lecturing. There was a lot of back-and-forth communication and figuring things out together.”

“Thuy Do was a most amazing advocate and host. Very supportive and enthusiastic. She loves Worcester, she loves America, she loves Clark. That’s part of what made my time there such an amazing experience. People are so appreciative of American education — any education, and we often take it for granted.”

Hoa Sen faculty were eager to learn about Clark’s experience with implementing LEEP.

“They wanted to know what our growing pains were,” Boyle explains. “Like Clark, Hoa Sen is struggling with how best to assess learning. I offered a session on how one might design a more intentional, experiential curriculum. For example, if one of the goals is to teach students teamwork, the academic department has to target the courses where that skill will be introduced and practiced, and identify courses in which students will be expected to demonstrate mastery. We worked on how to map a curriculum to create that kind of consistency and developmental trajectory.”

“Thuy Do was a most amazing advocate and host. Very supportive and enthusiastic. She loves Worcester, she loves America, she loves Clark. That’s part of what made my time there such an amazing experience. People are so appreciative of American education — any education, and we often take it for granted.”

Boyle is submitting a report to the Fulbright Foundation reflecting on her time at Hoa Sen. She will also publish several academic articles, beginning with one that critiques liberal education abroad as an expression of American “soft” power. The Fulbright Program, with financial backing from Harvard University and wealthy Vietnamese, is preparing to open a liberal arts college in Vietnam, the first Fulbright effort of this kind.

Top: Mary-Ellen Boyle (fourth from left) with the Fulbright team at Hoa Sen University in Vietnam. Clark alumna Do Thi Thanh Thuy, M.A ‘12, is fourth from right. Boyle is wearing a hand-made scarf presented to her by the team.