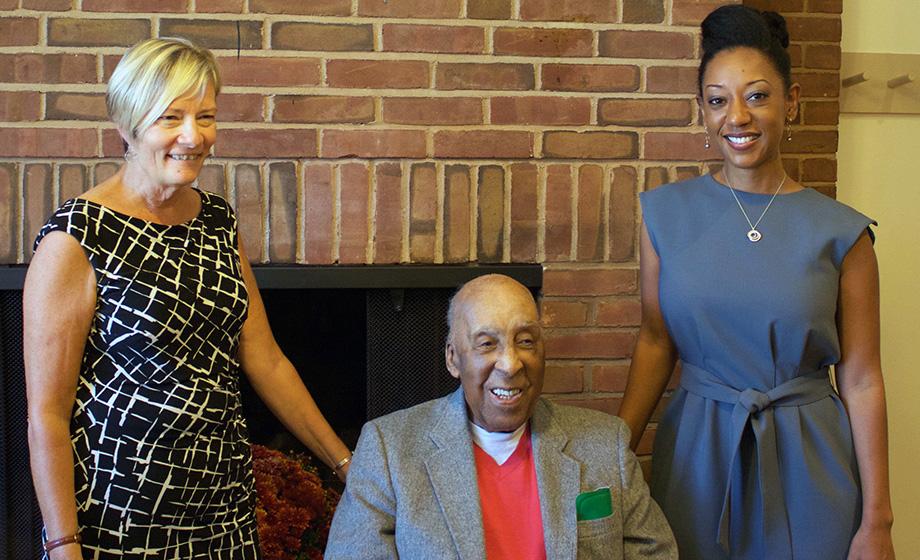 Stanley Gutridge ’45 returned to Clark University Oct. 6 to share his thoughts about the evolution of Worcester, the value of public service, and the institutional racism he faced when he entered the work world. His recollections were plentiful and detailed, and the conversation always engaging.

The Community Fireside Chat held in Dana Commons was co-hosted by Esther Jones, professor of English and director of Africana Studies, and Janette Greenwood, professor of history.

Gutridge, 99, enrolled at Clark in 1942 to pursue a degree in business administration after graduating from the New England School of Accounting. At the time he was Clark’s only African-American student.

He began the hour sharing his memories of Worcester, describing different ethnic neighborhoods and the plethora of manufacturing businesses that thrived during his youth.

“Worcester was a strange city back in those days,” Gutridge said. “In most cities you would live on the east side or the west side, but Worcester had two main streets [Main Street and Park Avenue] and in between there were all kinds of people, different cultural areas. Worcester was a city of hills, and churches, and people.”

Gutridge described his experiences as a black man growing up in the city and the changes he has seen over the years. He recalled being denied admission to a business college and being rejected for accounting jobs because of the color of his skin. He counseled the students in the audience to be mindful that they will face struggles, and they must rise above them.

“We all have trouble,” he said. “Ever since Adam and Eve there have been troubles; we haven’t started anything new. You’re living in the same world, and you are the one who must make your own decisions to determine your own life.”

Gutridge’s connection with Worcester began long before he was born. His mother’s parents married here in March 1884. His grandfather, a freed slave, was a coachman and his grandmother was a housekeeper. They lived in a carriage house on Harvard Street, which he described as “a little cultural section near Lincoln Square where some of the wealthiest people in the city lived.” As a girl, his mother had the opportunity to attend school with the children from prominent families. “She learned to do the finer things, like how to have tea parties,” Gutridge said with a laugh. “She carried this tradition when she brought up us boys. I have to admit, as the youngest [of three brothers] I was the spoiled one.”

Gutridge noted that he loved teaching Sunday school, which he did for decades with his wife, Natalie. “Since we didn’t have our own children, we had the privilege of all others. There is nothing finer in life than having children whom you taught come back 10, 20, 30 years later and say, ‘Mr. Gutridge, I now appreciate what you were talking about.’”

The recipient of the MLK Eleanor Hawley Community Service Award for his decades of public service, Gutridge urged the students to look beyond themselves. “You have something to contribute to your community,” he said.