Something mold, something new

As a biologist, Clark University’s John Gibbons deals with the big questions about DNA and the evolution of genomes. His research focuses on humans’ domestication of microbes such as koji, a 9,000-year-old mold used to produce soy sauce, sake, miso and other Asian delicacies. By studying alterations in the genes of such fungi, Gibbons aims to better understand how disease-causing microbes evolve and emerge as threats to human health. For example, how did koji, or Aspergillus oryzae, evolve to become harmless, while the species from which it was domesticated, Aspergillus flavus, produce toxins that can harm humans and contaminate crops?

Over the past two years, Gibbons’ research has been published in significant peer-reviewed journals such as BMC Genomics, Genome Biology and Evolution, Current Opinion in Genetics & Development and the Proceedings of the National Academy of Sciences (PNAS).

But when you are a scientist investigating a microbe that also happens to have a well-established culinary footprint, you can become a go-to source not only for evolutionary biologists but also for adventurous epicureans. And that can add some levity to an otherwise serious topic, one that finds its way not only into scientific research papers but into post-apocalyptic novels depicting worldwide pandemics brought on by human-induced pathogens gone wild (think Stephen King’s The Stand).

Such was the case recently when Gibbons, assistant professor of biology, was interviewed by writer Cynthia Graber for a Cook’s Science article titled “Koji: The Science of a Delicious Mold.” In a soon-to-be-opened deli in Cleveland, Graber tried a pork chop covered in koji, which she describes as “a pale gray-white fuzz, a Lilliputian moonscape of craters and mountains, darker gray rivulets dotting the surface.”

Apparently Cleveland is not alone in experiencing the koji phenomenon. Jeremy Umansky, Graber explains, is joining “a small but growing group of American chefs who are discovering the power of this tiny microbe. They’re testing koji’s limits and creating new flavors for American diners.”

Grown in wet grains, koji becomes a starter that can be added to a second food source, such as soybeans or rice or beans, to ferment and create something entirely different: soy sauce, miso, sake, fermented bean paste or any number of staples found in Japanese, Chinese and Korean cuisine.

But koji’s cousin, Aspergillus fumigatus, can be deadly, especially to those with suppressed immune systems, Graber points out.

“These nasty, poisonous chemicals released by Aspergillus are known as secondary metabolites; that is, while proteases and amylases help the microbe break down starch or beans, those secondary metabolites kill off competitors,” she writes. “And yet in koji, the genes that code for the poisonous stuff have been completely turned off, and only the useful compounds — useful to both fungi and humans — remain.”

When, during evolution, did the detoxification of koji occur? 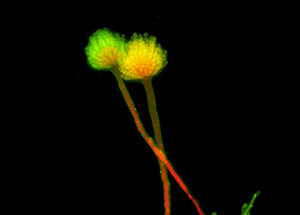 “That’s one of the big mysteries in fermentation history, but in almost all cases of domesticated mold, we find that this pattern is repeated,” Gibbons explains. “It is clearly a trait humans selected for.”

As Graber notes, “Gibbons is attempting to re-create koji domestication in his lab in order to understand its evolution, which traits were most useful and were thus propagated, and how koji shed its toxins. Whatever the case, over the years, humans did grow and refine strains of koji, much as they bred corn and tomatoes. Since that first rice wine, and over the ensuing centuries, people living in what are now China, Japan, and Korea passed down useful spores, choosing the ones most likely to produce the desired foods. In doing so, they figured out how to grow varieties of koji to help produce alcohol or soy sauce or fermented bean paste. And they changed the genetics of the fungus as they did so.”

This is not the first time Graber, cohost of the podcast Gastropod, has called on Gibbons to explain the science behind koji. She wrote about the topic for The Boston Globe last spring, profiling Rich Shih of Lawrence, Mass., who began experimenting with koji and turning it into miso flavors ranging from peanut butter to bacon.

Gibbons provided some historical perspective. “Koji is somewhat finicky, demanding plenty of surface area on the wet grain, along with a warm, humid climate, similar to that of its home region,” Graber wrote. “Gibbons says we don’t know exactly when or how this discovery was made, but at some point in food history, people realized koji could be employed to make tasty new products.”

But the remaining question we have for Gibbons is: What’s your favorite koji treat?

“Without a doubt, my favorite koji product is sake,” he says. “I’ve been making sake since I started studying koji in graduate school and have experimented quite a bit with different strains to make rice wine with different flavor profiles. The best part about studying food microbes is enjoying their products!”