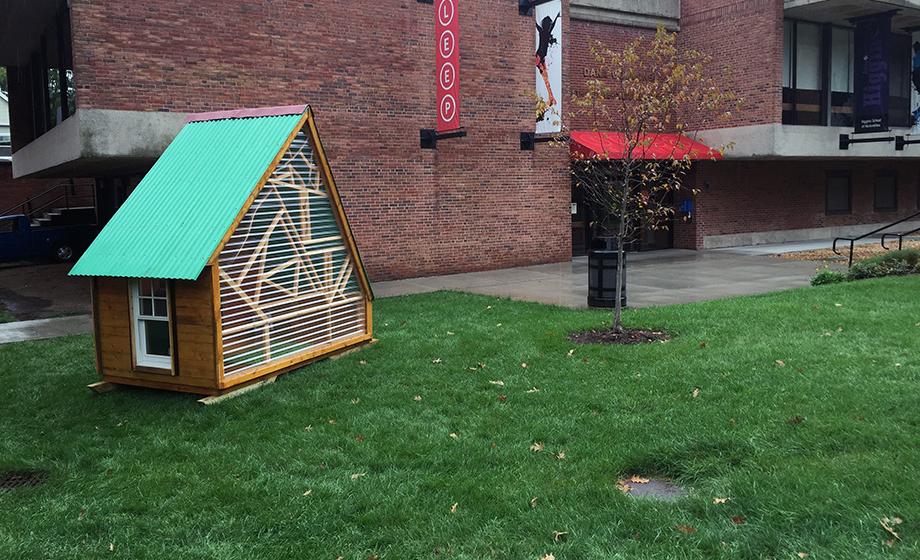 Diedricksen, one of the leading designers and builders in the micro-shelter movement, focused on how building tiny houses made largely from recycled and repurposed items reduces waste while showing the audience pictures of his buildings and other salvage creations. He jokingly described what it’s like to be self-employed, “in my backyard, listening to heavy metal, drinking beer and building stuff,” and said he feels blessed to have the freedom to do what he pleases, but admitted he’s a workaholic because he loves what he does.

Although Diedricksen doesn’t have traditional carpentry training, he has a lot of unconventional building experience. Over the years, he has worked on diverse projects, from seasonal microshelters to tiny houses on wheels to treehouses for children. Diedricksen is currently working on a Lego-themed treehouse for a boy on behalf of the Make a Wish Foundation; the boy’s parents reached out to Diedricksen at their son’s request because of their son’s fondness for his handiwork and his funky graffiti art. He said that working with a large budget is unusual for him, and has enabled him to build out the treehouse, which is two stories high, very modern and features a lot of artwork and light-up details.

Diedricksen mentioned he’s also collaborating on a documentary about a box truck conversion which will be used as a traveling “education center on wheels,” and he is in the early stages of planning a show called “Micro Men.” He also works on what he refers to as “shelters as art,” and puts his houses in art galleries and museums as a way to attract more museum patrons and spread the word about the tiny house movement.

Diedricksen told attendees his annual tiny house building workshop, which in previous years was held at his house in Stoughton, Mass., has become so popular that he had to change its location from his backyard to a bigger plot of land he owns in Vermont. This year the workshop attracted 60 people, some of whom traveled from Chile, Spain and the United Kingdom, where the tiny house movement has really taken off.

One of Diedricksen’s micro-shelters is now stationed on the Alden Quad, where it will remain until spring. Professor Amy Richter, director of the Higgins School of Humanities, introduced the lecture and told attendees that members of the Clark community will soon be able to reserve the space for classes or clubs to hold meetings inside.

“It started for me as a hobby,” Diedricksen said, “and it’s still fun.”

It’s also challenging to build something strong and lightweight. Diedricksen said he tries to use materials he finds on the side of the road into his structures, as doing so saves him money and makes his creations unique.

“We’re a very wasteful society,” said Diedricksen, who sees salvage as an opportunity to mitigate that.

“A lot of people are thrilled to see their stuff being used.”

In addition to the Higgins School of Humanities, Diedricksen’s lecture was also funded by the Graduate School of Geography, Sustainable Clark and the Urban Development and Social Change Program.

Photo: A tiny house built by Derek ‘Deek’ Deidricksen will be on display on Alden Quad until spring.