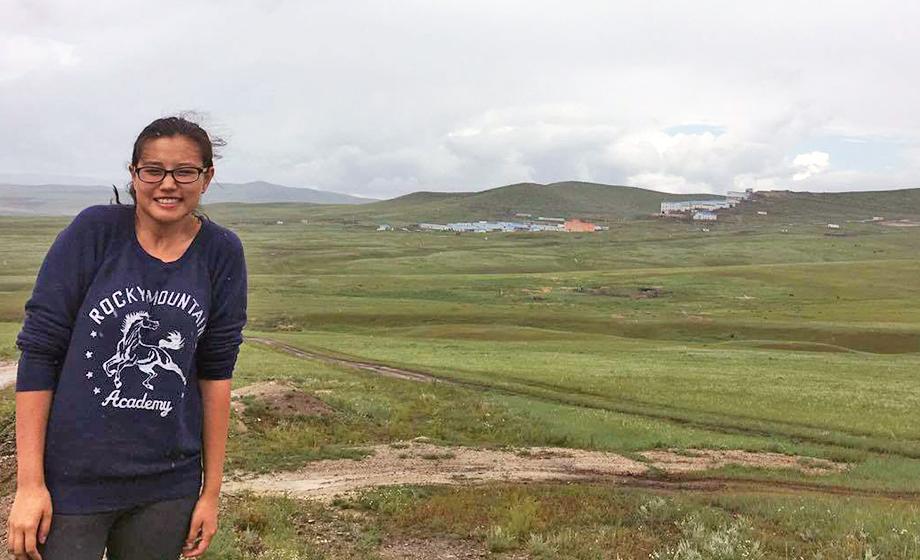 Clark University junior Odgerel Chintulga took her LEEP project back home this summer. The native of Ulaanbaatar, Mongolia, conducted research on the mining industry’s impact on the nomadic people of Khanbogd.

Chintulga (pictured), who majors in environmental science and minors in economics, says her interest in the subject was sparked by a course emphasizing economic and environmental values; it was taught by Christos Makriyannis of Clark’s Economics Department.

Because very little research takes place in Mongolia, it can be difficult to find financial support, Chintulga says. Her LEEP fellowship gave her the necessary resources to pursue her work. “When I heard about LEEP’s funding, I said, ‘I really want to do something for my country. This is an opportunity that doesn’t come often.’ ”

Mining of coal, copper and gold is a massive industry in Mongolia. The Mongolia Mining Project Report of 2011 noted that the Oyu Tolgoi mine, the focus of Chintulga’s research, has the potential to boost the national economy by a third. However, it is also the subject of profit-sharing disputes.

“The government is involved to gain money from the mining industries,” she says. “They’re thinking about the short-term incomes but not about the long-term environmental damage and how it is going to affect us. It’s going to economically cost Mongolia, too.”

Chintulga’s research consisted of three stages. First she collected data about the Oyu Tolgoi mine’s water usage. She then interviewed local herders and nomadic people on how mining, development and Westernization affect their culture and living circumstances.

Now she is back on campus finishing the last piece of her research: calculating the environmental damage caused by mining and placing an economical value on it. She expects to compile her research, including the final data analysis, and publish it in an article.

Chintulga says interviewing the families let her hear first-hand how people are struggling in the shadow of the mining companies.

“Herding is a main source of income for nomadic families, but the mining takes up such a huge space. [The companies] dig holes all around the area, and they don’t close them when they’re done,” she says.

For the herders, this negligence has proved costly: The families estimate a hundred sheep and horses die per year from falling into the open holes.

“The mining companies don’t compensate the families for that. They ignore them,” Chintulga says. “Those people don’t have the higher level of education needed to take action against this injustice.”

The herders are told to complain to local politicians and to write letters, but often there is no response, she says. Those who protest are met with aggressive or threatening reprisals. Because the issues are not covered by the media, abuses are left unexposed.

Chintulga’s work has given a voice to these families.

“In high school I became really passionate about environmental justice in Mongolia,” she says, “and that was one of the reasons I decided to come to Clark — to get empowered.”