Clark University makes the grade at ‘40 Under 40’ awards event 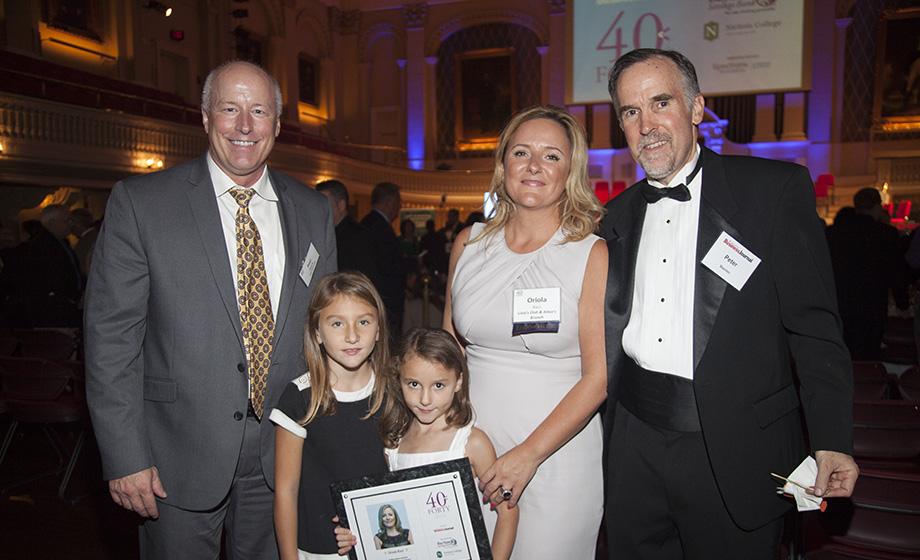 As it so often does, Clark University enjoyed a robust presence at the Worcester Business Journal‘s 17th annual “40 Under 40” awards program held Sept. 14 at Mechanics Hall. Launched in 2000, the awards honor business leaders under the age of 40 who are making an impact in the Central Massachusetts/Metro West region.

Among this year’s awardees are four Clark alumni, who perpetuate the notable inclusion of Clarkies among this selective group. In the past three years alone, more than a dozen alumni have found their way onto the WBJ list.

This year’s representatives boasting a Clark degree are:

Alexander Dunn ’11, M.B.A ’12, of Worcester, who in 2012 co-founded the video production company Skyscope with fellow Clarkies Sam Shepler ’11, M.S.P.C. ’12, and Gabe Gerzon ’11, M.S.P.C. ’12. As chief operating officer, Dunn has worked on finance and business strategy. The firm has grown to a 10-employee operation that provides services for dozens of national technology companies. In April, Skyscope was acquired by the public relations and social media firm, Matter Communications. Dunn also serves on the Community Advisory Committee for the Worcester Redevelopment Authority and is as a mentor for a STEM incubator.

Julie Holstrom, M.P.A.’08, of Shrewsbury, joined the Worcester Business Development Corporation in 2008 and as senior project manager has administered more than $5 million in grant funds by overseeing projects like the redevelopment of the Worcester Telegram & Gazette building and the demolition of a former manufacturing facility in Worcester’s Canal District.

Jasmine Jina Ortiz ’01, of Worcester, joined Keller Williams three years ago. In that time she has increased the numbers of Latinos purchasing residential and commercial properties and driven participation in the first-time homebuyer and U.S. Department of Housing & Urban Development programs. Ortiz teaches writing and literature courses at Quinsigamond Community College and is the co-editor of the anthology “All About Skin: Short Fiction by Women of Color.”

Oriola Koci, M.S.P.C. ’09, of Worcester, took the hard work and risk-taking skills she honed in her corporate jobs and applied them to her dream of owning a restaurant. She and her husband Enton Mehillaj, executive chef, opened Livia’s Dish on Worcester’s Main Street, and helped introduce the seven-day-a-week brunch concept to Central Massachusetts. Now, they are working on a second city location, Altea’s Brunch, on Park Avenue. Koci also serves on the Worcester Airport Advisory Committee and is the first vice president for the Webster Square Business Association.

Also earning recognition at the event was Hawley Harrigan, who teaches change management in the School of Professional Studies at Clark. Harrigan is director of operations at Big Brothers Big Sisters of Central Mass./Metrowest.

“When we see the number of Clark alums on the list, it is a strong indicator of our program’s success and we are meeting our mission,” says John Chetro-Szivos, associate dean of professional studies and online education. “We are so proud of the accomplishments of our alums and their ability to excel in their fields.”

Photo (above): Oriola Koci, M.S.P.C. ’09 is pictured with her children, center, along with Associate Dean Paul Mack, left, and WBJ publisher Peter Stanton.