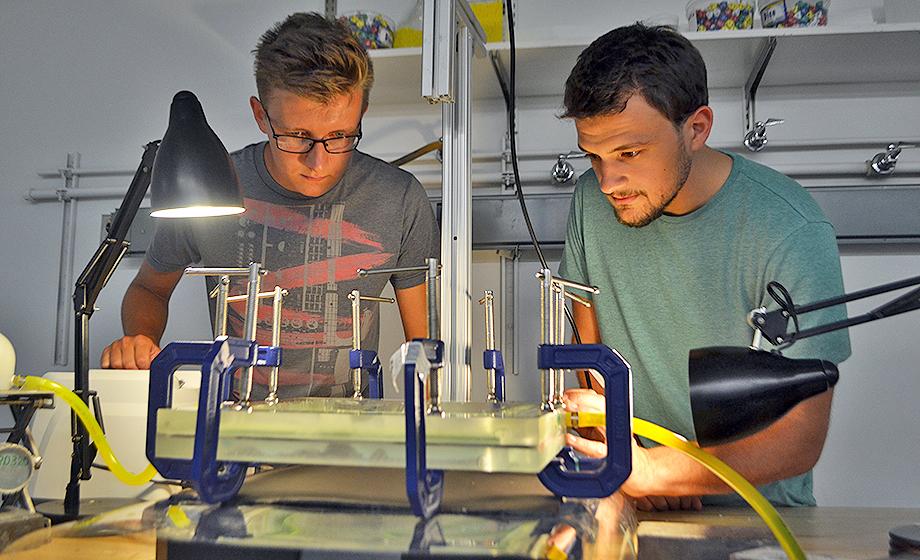 Two undergraduates majoring in physics at Clark University are working with their professor, Arshad Kudrolli, to fine-tune a mathematical model that captures the development of erosion underground. Their research, part of a summer LEEP project, eventually could help scientists better understand the effects of hydraulic fracturing, or fracking, and other cases where fluids carve out channels and destabilize the earth.

Fracking – in which water and sand are pumped into the ground during the extraction of gas and petroleum – has been determined to increase seismic activity, according to a 2015 study published in Science. Re-injection of wastewater, a byproduct of drilling during oil and gas production, can produce even larger quakes, such as this month’s 5.6-magnitude tremor in Oklahoma. Along with increased oil and gas production, Great Plains states have seen a dramatic rise in quakes: 907 in Oklahoma last year and 54 in Kansas, according to The New York Times.

But how can scientists and engineers better understand what is happening underground and prevent human-induced seismic activity?

That’s where Kudrolli’s research comes in. It’s the subject of his recently published paper, titled “Evolution of Porosity and Channelization of an Erosive Medium Driven by Fluid Flow,” in Physical Review Letters, with Xavier Clotet Fons, a former postdoctoral researcher in the professor’s Complex Matter and Nonlinear Physics Laboratory.

Most research in this area has examined erosion at the earth’s surface, not below ground, according to Kudrolli. “We are more aware of the planets and stars that shape our universe many light years away than the earth just a few meters underground,” he says. “Our study is broadly motivated and concerns conditions under which fluid flow results in erosion or transport of materials. The fluid can be water, oil, and gas but also liquefied CO₂ for potential carbon sequestration.”

Over the summer, two LEEP Fellows – Nathan Fitzpatrick ’18 of Rumford, Maine, and Nikolay Ionkin ’18 of Pomfret, Connecticut – worked with Kudrolli to test and refine the mathematical model and physics principles behind the research. Their research may be included in a publication in a scientific journal, Kudrolli says.

Their study of how fluids carve channels in sedimentary rock layers, increasing porosity, is “fundamental research,” Kudrolli says. “When you’re doing that, it seems like a very abstract problem.” Yet eventually, such research could help scientists better understand subsurface erosion and not only help curb human-induced earth tremors but also identify sinkholes, landslides, aquifers and dam breaks.

“What we’re studying here applies to a much, much larger picture,” he explains. “At some level, we are asking how is this going to be applied, in terms of how much money we pay for gas or the cleanliness of the oil we produce.”

For instance, such research could help identify pockets of oil deep underground. “Oil migrates, and because it is less heavy than water, it gets trapped under capstones,” Kudrolli says. “You want to understand how it flows under the subsurface so you can understand where to drill. Drilling is expensive.”

Likewise, engineers want to better understand where the sand-and-water sludge used during fracking can be distributed underground so that rocks don’t collapse, Kudrolli notes. “There are all kinds of optimization problems that need to be solved,” he says. “Solving those reduces cost and also reduces the number of trucks bringing sand to that site, which in turn reduces pollution.”

Kudrolli explains how his students try to solve these complex problems “in simplified, two-dimensional form.” In their simulation, they use two glass plates, with a gap in between to mimic the sedimentary rock layers, like those visible in the Grand Canyon. In the gap, they place glass beads, representing the rocks and particles that erode and channelize as water is pumped through.

“We’re trying to understand how sand and other such bodies move throughout the earth’s surface when you mix them with water,” Fitzpatrick says. “So you can imagine with fracking, someone would take slurry, a mixture of water and sand, and they would push it into the earth’s crust, and it would move in particular patterns.”

Throughout the summer, he and Ionkin regularly introduced slight tweaks to the experiment: adding and subtracting beads, increasing or decreasing water flow, adding a concavity to change the force of the flow, and more. They recorded their observations, applying the fundamental principles of physics, and tested the mathematical models that captured the changes in water flow, porosity and erosion.

“We want to simplify the experiment as much as possible,” Ionkin explains, “because when it happens in crust of earth, it’s very complicated and very difficult to analyze, so we want to decrease the number of variables to get an understanding. Every step, we make the physics simpler so it can be better understood.”

The students record their experiment every two seconds. “We end up with thousands and thousands of pictures,” Ionkin says.

Both students have enjoyed working on research that has allowed them to tinker with a device and apply the theories of physics – and engineering – to a hands-on experiment.

“I liked building the system over and over again. We’re both interested in the engineering side of physics,” says Fitzpatrick, who is considering applying to Clark’s fifth-year Accelerated Master of Science in Physics program or to an engineering program elsewhere. “We’ve gained real research experience in the lab, which is something you can never take for granted. It’s great for resumes and college education in general.”

Ionkin says the experience has confirmed that he’s on the right track. He hopes to pursue Clark’s 3/2 Engineering Program with Columbia University. “Before we got into our LEEP project, we had no idea what research was like,” he says. “If you’re considering graduate school, it gives you a taste of what that might be like. So if you find out you really hate research, then maybe graduate school isn’t for you.”

Above, Nikolay Ionkin, left, and Nathan Fitzpatrick look over their physics experiment.