Joukowsky, the film’s producer and Sharps’ grandson, shared his process during visits with Deborah Dwork's students
By Clark News and Media Relations 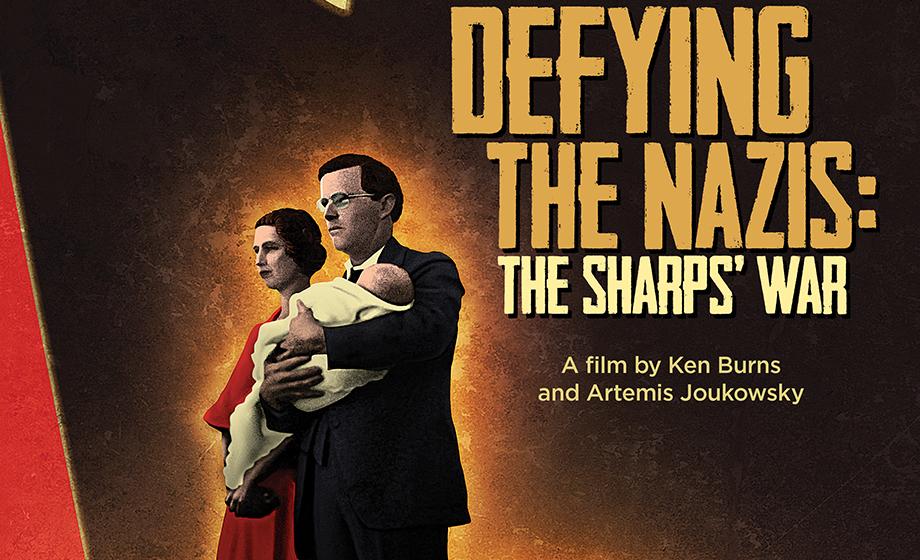 “Hitler came to power on January 30, 1933. Within half a year, the life of every single Jew living in Germany — that’s half a million people — was radically changed.”

These words are among comments contributed by Holocaust historian and Clark University Professor Debórah Dwork in “Defying the Nazis: The Sharps’ War,” the new documentary about a little-known but important mission by an American minister and his wife to rescue refugees and dissidents in Europe before and after the start of World War II.

“Defying the Nazis,” co-directed by Ken Burns and Artemis Joukowsky, with narration by Tom Hanks, is scheduled to air nationwide at 9 p.m. Tuesday, Sept. 20 on PBS. A trailer is available here.

“I don’t study the past because I like old things. I look to the past to serve as a compass as I go forward in life. This documentary reminds us how desperate the situation for refugees is. And it reminds us we can make a difference.”  — Professor Dwork, quoted in a Worcester Telegram article (Sept. 19).

The film is about Unitarian minister Waitstill Sharp and Martha Sharp, his wife. Selected by the Unitarian Service Committee, the couple traveled to Prague in early 1939 to provide relief to refugees from Sudetenland. The Germans then rolled into Bohemia and Moravia, and the Sharps’ mission turned to rescue as well as relief.

Professor Dwork was asked to participate in the documentary in order to anchor the Sharps’ history — the decisions and actions they took — in the larger historical frame. “Refugees needed documents. They needed money. They needed assistance,” she comments in the video. “The Sharps stepped into that vacuum.”

As Rose Professor of Holocaust History and founding director of Clark’s renowned Strassler Center for Holocaust and Genocide Studies, Dwork knows the topic and the story of the Sharps’ heroic efforts very well. Her research and current book project, “Saints and Liars,” tells the story of  Americans — Quakers, Unitarians, secular people, Jews — who traveled to Europe to aid and, step by step, became engaged in rescuing people targeted by Nazi Germany and its allies. Her research explores the stories of the Sharps as well as the work of Elizabeth Anthony Dexter and Robert Dexter (both Clark University doctoral graduates).

“Who were these intrepid people who, unlike so many of their fellow citizens, perceived possibilities for productive action where others saw none?” Dwork writes.

Women figured prominently in these initiatives, Dwork notes: “Philanthropy and service have long been women’s work. But this philanthropy and this service offered unimagined avenues for independent action. And the women loved it. They were committed to their missions. And, at the same time, they relished the derring-do, the independence, the freedom from social norms. You will not be surprised to learn that the Sharps divorced after the war.”

Dwork adds: The operatives accomplished a lot. They brought large sums of money into enemy territory, organized escape routes, helped spring prisoners from incarceration. Their history illuminates the factors that prompt engagement, and lays bare how rescue activities unfolded on the ground.

Joukowsky, a film producer and co-founder of No Limits Media, is the grandson of the Sharps, and has spent decades researching their story. He is the author of a companion book to the film, which will be published by Beacon Press and released on Sept. 6.

Joukowsky has been “a generous friend to my seminar classes,” Dwork says. At least twice he visited her seminar course at Clark on Rescue and Resistance, sharing progress of his   documentary project. He even circulated the script in advance to her students (undergraduates and graduates), who provided their feedback. “He spoke easily and openly with them about his grandparents and about the process of deciding to do this film,” Dwork said.

“The story of Waitstill and Martha Sharp is one of the most incredible tales of compassion, sacrifice and heroism that I have ever heard, and I was completely unaware of it until five years ago when Artemis Joukowsky first shared it with me,” Burns says. “Nearly three years before America as a nation became involved in the Second World War, these two unassuming, so-called ‘ordinary’ Americans gave up everything they knew and loved and risked their lives to become involved in a war 4,000 miles away because they knew there were people in grave danger who needed help.”

Above artwork courtesy of PBS.