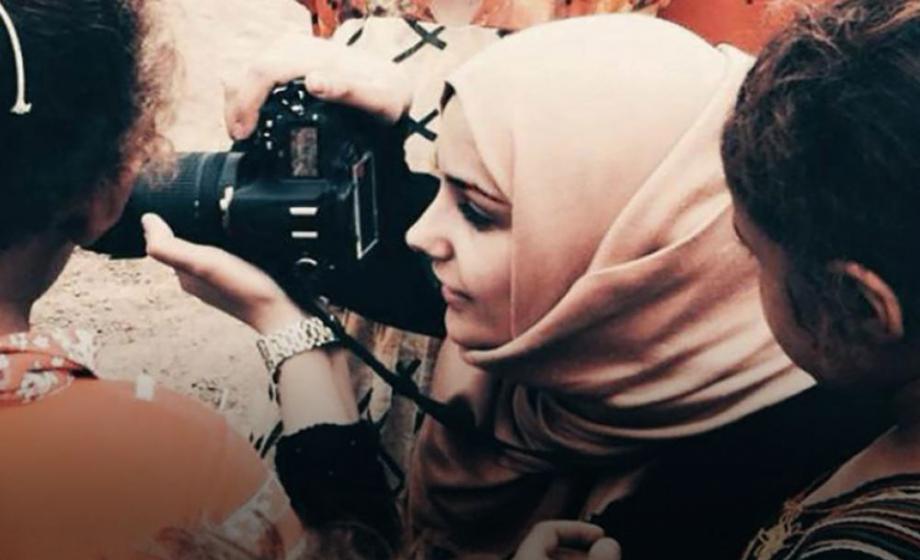 Thana Faroq ’13 took her first photograph — a picture of her family — using her father’s camera when she was just 10 years old. Back then, she and her family lived in a peaceful Yemen, one without war or bloodshed.

Today, Faroq (pictured above), a Sanaa-based photographer, captures images of her war-torn city’s street life. Many of her images tell the stories of women impacted by fighting between a rebel group and the country’s government (with some areas under Al-Qaeda control). According to Al Jazeera, since 2014, more than 9,000 people have died and 2.8 million have been displaced by the fighting.

Her photos showing women and girls in displacement camps and towns throughout Yemen are part of a series of photo essays called “Women Like Us.” The series, which was on display in August at the Beyond Borders International Festival of Literature and Thought in Scotland, focuses on the war’s impact on women and how they cope with their situations.

“Each of these women had a powerful story to tell of resilience and strength in spite of challenges that made them flee and become homeless in their own country,” she says.

Below, Faroq, whose work has been used by Oxfam and UNICEF and featured in The Huffington Post, discusses how her education and experience shape her art.

Did you always want to be a photographer?

I have always loved art and photos. However, I didn’t realize I wanted to be a photographer until my passion of documenting my surroundings grew and I realized I needed to own something like a camera that would let me explore my surroundings.

You went to high school in Canada and came to Clark for college (she majored in government and international relations). Did your time away from home impact you as an artist?

It started in Canada because it was my first time joining an official art class. In higher level art classes, I was exposed to all art forms. It was fascinating. Back home, I learned to express my ideas through words, but when I moved abroad, things were different because I used forms other than words to express myself. Later, when I enrolled at Clark, I fell in love with the Visual and Performing Arts Department. It was my home, and offered me a lot of things to learn.

What was the most valuable lesson you learned in college?

Embracing the sense of otherness is the most important lesson I learned during my time at Clark. I came from a different culture and background. I had my own opinions and I was afraid I wouldn’t fit in as a Clarkie, but that wasn’t the case at all. Clark was the perfect environment to grow and learn from others.

“Did any professors make an impact on you?

Absolutely. I worked closely with professors Stephen DiRado and Frank Armstrong. They weren’t just professors, they were more like friends and still are. Since day one at Clark, they pushed my limits. They knew I could do more every time. Their good, harsh critiques to my work made me the photographer I am now.

Professor Ora Szekely was beyond amazing as well. In 2011, I had to miss a few classes to go to Egypt for a youth exchange program. While there, I had an opportunity to document the 2011 youth uprising. When I returned, she asked me to submit a paper for my class reflecting on my experience.  She emphasized that learning was never only in a classroom, and encouraged me to explore the world around me.

When and how did you get started taking street photographs? Have you ever felt in danger doing this?

I officially became street photographer when I was a student at Clark, and I continued to be when I returned home. It was different there, of course. At home, people aren’t used to seeing a female walking around carrying a camera. It was intimidating at first, but I was determined to make it a habit of mine. Even when the war broke out, I felt the need to continue capturing street life and never allowed fear to control me. There were many stories that needed to be told, and I was motivated to do that despite the challenges around me.

How difficult is it to capture everyday life on the streets of Yemen? Are people always willing to be photographed?

Whenever people visit a new place or country, they tend to walk around on the streets to get a sense of the culture and people. Streets are the mirrors to everything; there’s always something happening. This also applies to Yemen. Everyday life there is full of stories to document and capture in a single image. I’ve never had trouble finding interesting topics to photograph in my community or in anywhere in my country.

What makes a powerful image?

Many factors: the ways we capture it, the uniqueness of the subject, and the techniques used. But to me, a powerful image needs to make a statement, deliver a message and tell a story because this what captivates people. The picture isn’t beautiful if it doesn’t move the viewer and speak to his or her inner thoughts. It will never be strong enough if it doesn’t provoke emotion and make us think of the subject proposed in the photo.

Can you talk about why you’re passionate about showing humanity and fostering a sense of social justice with your photos?

I had to produce a book as an assignment for Professor Armstrong’s advanced studies class. He encouraged me to take photographs in my country and collect images that were meaningful to me — photos that carried a perspective and told stories. When I returned home for the summer (in 2012), I took the photos for my first book, “Faces of Yemen,” which was my first attempt in showcasing stories from my country. This wouldn’t have happened without his encouragement and support.

Do you have any special projects or exhibitions coming up?

I’ll be working with the British Council Organization in Yemen on a unique project called “I See with My Little Eye,” training children ages 9 to 16 on digital photography and visual storytelling. I can’t wait to have this experience, and I hope I’ll be their motivation for the future.