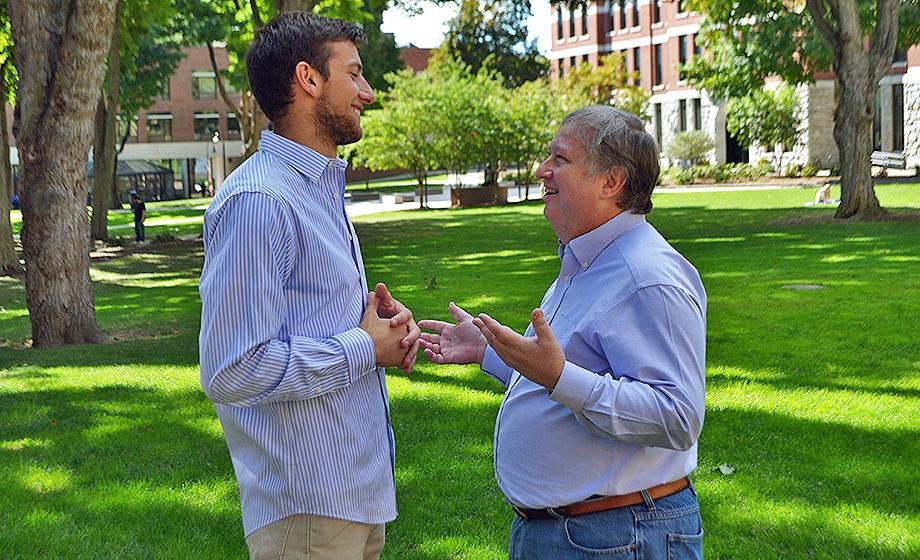 It was a transcontinental kind of summer for Mark Miller.

In May, the Clark University professor of political science presented a paper at the 16th Biennial Maple Leaf and Eagle Conference for North American Studies at the University of Helsinki in Finland. In it he argued that the U.S. Supreme Court needs clear standards for how it will approach discrimination cases based on sexual orientation and gender identity — cases like the so-called North Carolina LGBTQ “bathroom law,” an issue that became a hot topic of conversation at the conference, Miller (pictured above, at right) says. His paper will be published in American Studies in Scandinavia.

Miller is no stranger to Finland. He was the Fulbright Distinguished Bicentennial Chair in American Studies at the University of Helsinki for the 2014-15 academic year. In that time, he developed a strong affinity for a nation that sends and receives more Fulbright scholars and students to and from the United States than nearly every other country in the world, according to Miller. His return in May came at a propitious moment: the 40th anniversary of the Distinguished Bicentennial Chair, which brought back 17 former holders of the chair. Among the honored guests at the celebration were the U.S. ambassador to Finland, the former president of the Republic of Finland, the minister of foreign affairs and the mayor of Helsinki.

Finland, he notes, is a sophisticated culture, boasting the highest-ranked educational system in the world and a history of technological and artistic innovation. It’s also one where the people are very precise with their communications — the Finns are typically reserved, direct and rarely engage in small talk.

“When you’re on the Metro in Helsinki, even when it’s totally full, you can hear a pin drop. Even the dogs are silent,” he says with a laugh. “I think in nine months I heard a dog bark once.”

In late June, Miller recruited two of his Helsinki colleagues and three from Leiden University in the Netherlands — where he was the Fulbright Thomas Jefferson Distinguished Chair in 2008 — to participate in a workshop in Luxembourg sponsored by the Leir Center through the Henry J. Leir Luxembourg Program. The workshop, which Miller hosted, drilled deeply into American civil rights issues surrounding race, gender, class and the environment.

“I used my Fulbright experiences to bring together scholars who didn’t know one another, but should,” Miller says.

One of participants was Michael Spanos ’17 (pictured above, on left), a student in Miller’s “Lawyers and Politics” seminar, whom Miller invited to present at the workshop. Spanos, a political science major and captain of the men’s soccer team, presented his capstone paper on how the federal government has surrendered its involvement in arguing death penalty cases before the Supreme Court to private organizations like the NAACP and the American Civil Liberties Union.

The Waterford, Connecticut, native acknowledges that the experience of presenting to an audience of international academics was “nerve-wracking” but turned out to be overwhelmingly positive.

“They asked good questions and brought up points for further analysis,” Spanos says. “It was an interesting conversation since Europeans have mostly gotten rid of the death penalty.”

Spanos next year will pursue his master’s in public administration through Clark’s School of Professional Studies. After that, he’s on to law school.

Miller is now serving on the Fulbright Peer Review Committee to evaluate applications for scholars seeking fellowships in Finland, Latvia and Lithuania.