Board of Trustees, Parent Committee member and her daughter offer advice to first-year families during panel discussion
By Jessica Zandan, M.A. '05 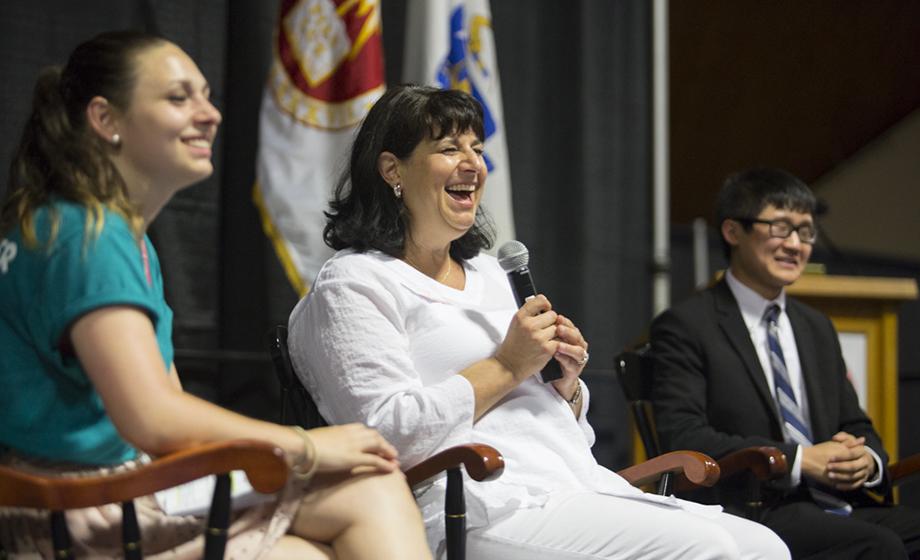 Cynthia Michael-Wolpert ’90 knows the stress that accompanies moving a child into college. 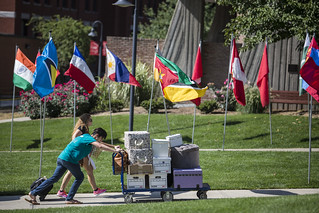 ​“It was like a kick in the gut,” she said during a Move-In Day panel discussion with her daughter, Natalie ‘18. “My baby was leaving.”

To help families of first-year students experiencing the same emotions, during a 45-minute presentation on Aug. 25 Cynthia and Natalie offered their wisdom and advice for the transition. Dean of Students Francy Magee moderated the discussion, which took place in the Kneller Athletic Center.

Cynthia, a member of Clark’s Board of Trustees and co-chair of the Parent Committee, recalled moving into Wright Hall herself and drew upon her experience adjusting to life as a mother of two college students. Natalie provided a student’s perspective and insight on what the first months at college can be like.

Here are some of their tips:

Faced with all the questions of early college life — like who she would eat lunch with and how she would meet friends — Natalie mentioned she drew upon the support of student leaders during her first couple of days on campus. “I was lucky I had a great peer adviser,” she said. “It’s why I became one.”

Cynthia felt a range of emotions on Move-In Day, and told the gathering that having something to look forward to, like planning a weekend to visit a friend, was key. She also joined the Clark University Families Facebook group. “It was helpful for me to see what other parents were asking,” she said.

Get connected on campus

Natalie said it took her two to three weeks to get adjusted to life on campus. “Being with others experiencing it too was really helpful,” she said. After that, she started to explore what Clark had to offer by way of clubs and organizations, which helped her become a self-proclaimed “social butterfly.”

During the first month of school, Cynthia said Natalie started mentioning clubs she hadn’t expected her daughter to take an interest in, but was pleased to see she was getting involved. “One of the most important things kids can do here is get involved in things outside of the classroom,” she said.

Rather than intervene on any problem that might arise with your child, Cynthia said, it’s important to let them find their own way. “It’s instinct to want to jump in and fix the issue, but your job is not to do it, it’s to coach them through it,” she said. She asked open-ended questions to understand why Natalie was frustrated in particular instances.

Natalie noted that many of those questions raised issues she hadn’t thought of before. “It’s was helpful, but the questions were harder to answer,” she acknowledged.

Learn about your student’s life on campus

Getting to know Natalie’s friends was helpful and fun, Cynthia said. She suggested taking your student and some of their friends out to dinner when visiting. She also recommended asking for a copy of your student’s schedule, which gives specific insight about what their day is like, and keeping up with on-campus news and events.

After two years on campus, Natalie and Cynthia agreed that their relationship shifted from logistical to something more. Natalie gained insight into a variety of topics while at school and Cynthia noted that conversations began to include current events and discussions on values, with some turning into lively debates. “I never would have expected that,” she said. “We have a deeper, richer relationship.”

Natalie suggested setting up a time to talk each week, especially during midterms and finals when things get hectic. Cynthia added it’s important to be flexible, and to try to make yourself available when your student wants to talk, which could be late at night when they have time.

And when Natalie returns home on breaks, Cynthia “doesn’t sweat the small stuff” — things like shoes on the floor — and just enjoys the time she has with her daughter.

Photo: Cynthia Michael-Wolpert ’90 and her daughter Natalie ’18 discuss what the first months at college are like for parents and students during a Move-In Day presentation in the Kneller Athletic Center, as Undergraduate Student Council President Cory Bisbee ’19 looks on.