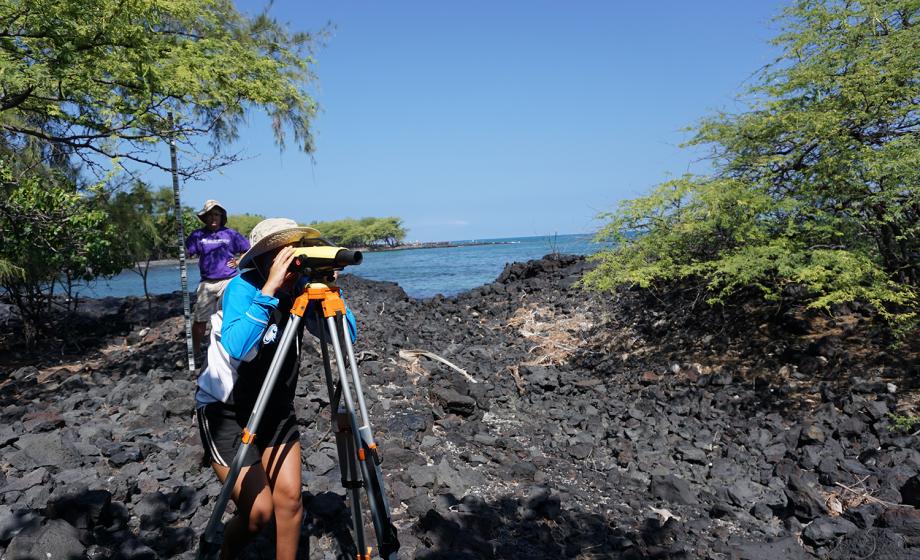 Not every college student gets to enjoy a summer in Hawaii, but that’s where Isabel Miranda ’17 was over the past few months — although she didn’t spend her days relaxing on the beach or riding the waves.

In May, Miranda was named a Marsh-Mosakowski NOAA Fellow, and soon found herself in the Aloha State, working on multiple projects with the National Oceanic and Atmospheric Administration’s Sentinel Site Program/Habitat Blueprint and Office for Coastal Management.

Miranda was a geographic information systems (GIS) intern, so much of her work involved data management. She mapped Guam’s 2015 fires, an effort that will help increase scientists’ understanding of El Niño’s impact on wildfire occurrences and to better help the U.S. Forest Service target campaigns at reducing intentional burns. NOAA is also looking at data on water quality, which appears to decrease during burning season.

“Most of the fires in Guam are intentional by farmers, hunters (who use fires to clear sightlines and draw deer and pigs into the open) and by homeowners who will burn savanna to create fire breaks around their residences. I am really grateful that I was able to contribute to the mapping of fires in Guam, as I know that wildfires have been frequent and are important to monitor,” she says.

Along with mapping the fires, Miranda worked with Sea Grant, a NOAA partner, on the Citizen Science King Tides Project. Sea Grant is a network that promotes conservation of coastal resources and identifies critical resource management issues. The Citizen Science project provides communities with an app to collect data on king tides (which are especially high tides) by taking photographs and noting any special features. Parts of the project on which Miranda worked include data identification, archiving and management and creating photo survey maps.

“The photo survey allows community members to see what future sea level rise might look like,” she explains. “It is also important for city planners, community leaders and hazard prevention teams to plan for the future of sea level rise and to document the changes over time.”

She also is creating a map of places that have been photographed, along with information about the best times and locations to capture a king tide.

In addition, Miranda assisted with leveling work to determine accurate elevation in places, including He’eia, an area of Honolulu that features fish ponds, a unique aquaculture found in Hawaii. Juvenile fish enter the ponds in shallow tidal areas, grow to maturity and then can’t escape. These become a food supply when conditions are not right for ocean fishing.

And on the Kona (“the big island”), Miranda and her group conducted leveling work in the Kiholo Preserve, collecting information needed by the Nature Conservancy and researchers for sea level rise modeling and accurate elevation positions. The preserve features anchialine pools, fishponds and trails.

Anchialine pools are brackish pools (filled with a mix of fresh and salt water) that have no surface attachment to the ocean but rise and fall with the tide because of underground connections. Applying her two majors, geography and studio art, Miranda designed a brochure cover and created infographics for outreach materials about the pools. Hawaii is the only state to have these unique ecological features; Kona has more than 600. The pools are used by Hawaiians for drinking water, bathing and a food source (they gather red shrimp from the pools for bait).

Miranda’s research in Hawaii has reinforced the complementary nature of her two majors.

“I am a visual learner,” she says, “and enjoy looking at images, analyzing imagery and working with information in a visual manner — and both geography and studio art involve visuals. Geography allows me to visually explore, monitor and understand the changes occurring in the environment due to climate change, as well as land and natural resource conflicts.

This story is part of our 7 Continents, 1 Summer series, which highlights the interesting work that Clark students, faculty, alumni and staff are doing all over the world.

“The NOAA internship has allowed me to learn more about monitoring sea level rise and assessing its impacts, which I had little knowledge of. I was also able to learn about the cultural importance of fish ponds and anchialine pools to the Hawaiian people and the history behind He’eia. Doing research in Hawaii allowed me to become sensitive to the cultural and ecological significance of sea level rise.”

She adds, “It’s also beautiful, as you get to see lovely scenery while you work outside — beaches, fish ponds or cliffs. And everyone there also has a good attitude and is very kind with the Aloha spirit! I know that I had a lot of support from the staff at NOAA and they were all very welcoming.

“This internship was a great experience, as I got to do a little bit of everything and not just focus on GIS — which is what I have mainly been doing at Clark. I also enjoyed getting to meet the animator at NOAA who works on outreach materials, as well as those who worked in the Marine Debris program. I think getting an all-encompassing experience of what NOAA does as an organization was valuable for me as I realized that it is not just scientists who form the backbone of NOAA, but also others who work to communicate the science to the public.”