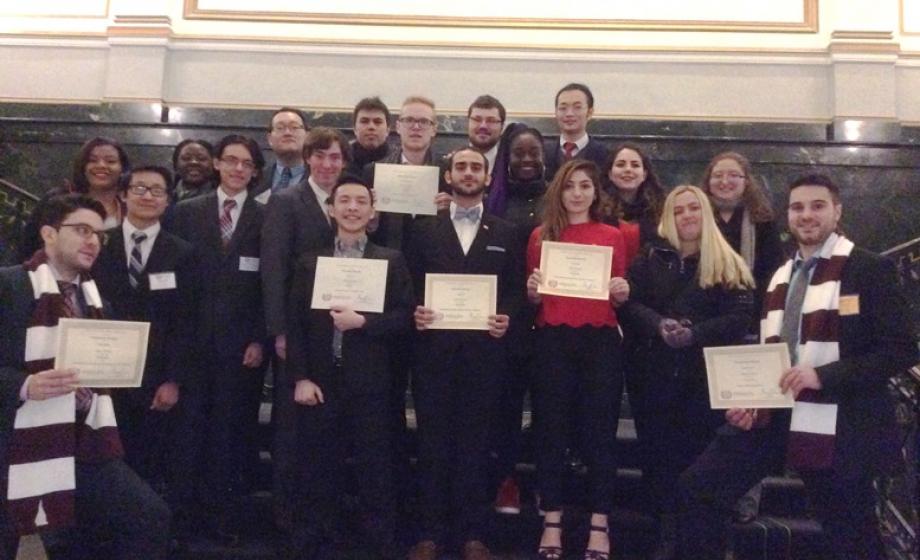 Imagine being in a room with hundreds of other people, each of whom comes to the table representing a different country’s interests. Your challenge: to explain your assigned country’s stance on an important topic like free speech and privacy, build consensus and negotiate a draft resolution upon which all parties agree. Would you know where to start? Clark University’s Model UN (MUN) team does.

“It’s an activity that challenges not only your intelligence, but your character,” says senior Corie Welch, a senior studying international development and social change with a minor in political science and concentration in Latin American and Latino Studies, and one of the team’s Head Delegates this year. “I can’t imagine pouring myself into anything else as much as I pour myself into MUN at Clark.”

Dozens of diplomacy-driven students with a passion for international relations devote time in a Model UN class with the group’s faculty advisor Professor Srini Sitaraman, associate professor of political science, after class and on weekends practicing their diplomatic and communication skills during simulated United Nations sessions and committee meetings on a range of topics and issues.

“We generate topics from the latest news headlines to test general knowledge and awareness,” Sitaraman says. “Additionally, we also focus on historical issues.”

The team’s hard work over the past four years has propelled it to a Number 17 ranking on the 2015-16 North American Colleges final list — higher than teams from Princeton University and American University — published by BestDelegate.com, a website dedicated to the MUN experience. Two recent alums, Doga Bilgin ’16 and Justin Lewis ’16, were named to the third team of Best Delegate’s 2015-16 North American College Model UN All-Star Team.

“To me, Model UN is an example of the Effective Practice side of LEEP. It’s an extracurricular that supplements the hard knowledge you learn through the courses you take.”

In the past year, dozens of team members, from first-years to seniors, attended eight MUN conferences around the country, taking home numerous awards and accolades from each — including being named Best Delegate, the top prize for a given conference. This fall and spring they plan to participate in another eight — including conferences at Columbia University, Boston University, McGill University and Harvard University — against the best teams in the country.

“Students learn very valuable life skills, such as the ability to present their work and points of view in a professional setting,” Sitaraman says. “Seeing them evolve on their policy positions and become more judicious in interpreting the dynamics of international politics is interesting. More importantly, it’s very heartening to see them succeed.”

Brendan Burgess, a junior majoring in computer science and political science focusing on international relations, only joined the team last fall. However, he took part in six conferences and was named one of this year’s Head Delegates by his fellow teammates. He enjoys being a part of Clark’s team because it’s small — and he believes he’s learned invaluable skills that will serve him well in the future.

“[During simulations] you have to convince people that you best represent their interests and to follow you, which helps you learn how to lead effectively, networking and any other number of ‘soft skills,’” he says. “These skills are absolutely crucial no matter your future career, and have already helped me get a prestigious software development internship as a sophomore when it’s normally reserved for juniors.”

Cory Bisbee ‘19, a political science and Asian studies double major and the group’s current secretary general, plans Clark’s annual MUN conference for middle and high school students. He says involvement in the group teaches the “fundamentals of what you need to succeed in life” such as “confidence, how to express yourself cogently and build connections with others, and the ability to come to agreement on points of contention.”

“To me, Model UN is an example of the Effective Practice side of LEEP,” he adds. “It’s an extracurricular that supplements the hard knowledge you learn through the courses you take.”

Three MUN participants took their experience and skills to work at the United Nations this summer. Dea Dodi ’17, Arslan Tarar ‘18 and Absar Ali ’18 each worked in different areas of the organization, but all echo a common thought — the experience was invaluable.

“There are plenty of nuances in the ‘real world’ that classroom work can only ever hope to cover,” says Tarar, a computer science and economics double major who worked in the Information and Communication Technology Services department of the United Nations office in Nairobi, Kenya. “Discovering these for yourself is more beneficial to anything you plan on doing.”

“It isn’t every day you have front row seats (quite literally) to diplomatic history in the making. Unless, that is, you work at the U.N.,” Dodi, a political science and economics double major who worked as an intern advisor at the Permanent Mission of the Republic of Albania to the United Nations, writes in her blog “Mission Deconstruct.”

Dodi — who also interned at Human Rights Watch this summer, working with Clark alum and former MUN participant Sarkis Balkhian ’09 — says debating in Clark’s diverse, accepting community allows alternative viewpoints and theories that lead to innovative approaches that are “helpful and necessary in any working environment, not just the U.N.”

That sense of acceptance and community draws members to the program as high school students as Dodi, Welch and Bisbee can attest, as they all discovered Clark on the strength of the team.

“With Clark’s program being nationally known, there was no way I could not apply,” Bisbee says. “I applied to many of the best schools but even after getting my admissions decisions, it was Clark’s heart that won me over and MUN that led me to it.”