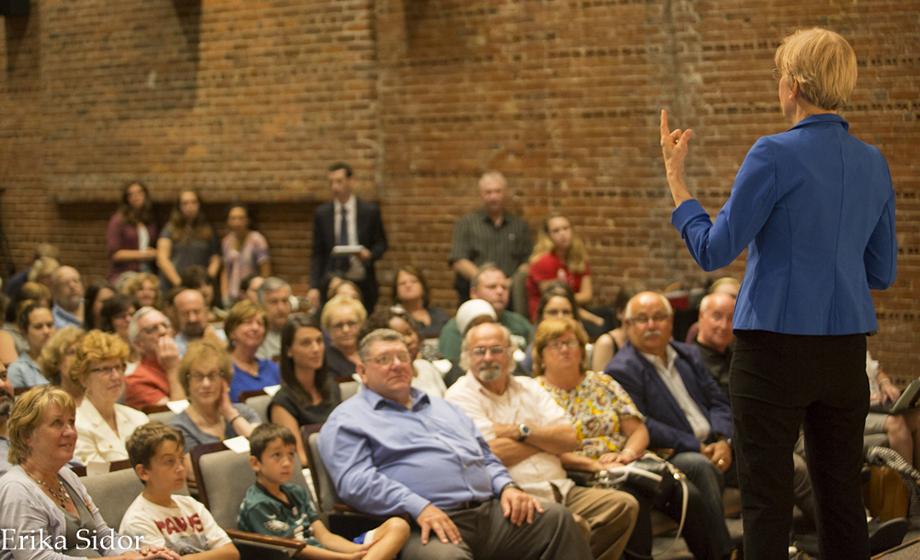 Sen. Elizabeth Warren (D-Mass.) stood before a packed house in Jefferson 320 Wednesday and recalled that the American economy once obeyed the adage “A rising tide lifts all boats.”

No more. In recent times the wealthiest 1 percent have seen astounding increases in their fortunes while the rest of the population has experienced stagnation or worse, she said. “It just ain’t working anymore.”

Warren came to the Clark University campus, her second trip here in five months, to discuss “how the playing field got tilted against America’s middle class — and what we can do to fight back.”

Technical difficulties prevented Warren from displaying her 50-plus slide PowerPoint (she gamely offered to act out the slides — drawing laughter from audience). Instead, she delivered the highlights, reaching back into history to explain how the country evolved into one that’s now divided between the haves and everyone else.

Warren said the country had a long history of boom-and-bust economies that finally collapsed, leading to the Great Depression. In response, the government instituted strict regulation of the financial industry through the Glass-Steagall Act and invested in education, infrastructure and research, which not only created a reasonable standard of living for most citizens, but also built “a pipeline of great ideas.”

The “trickle down” policies of Ronald Reagan in the early 1980s initiated fundamental change, she said. Glass-Steagall was gradually dismantled — “They fired the cops who were patrolling Wall Street,” Warren said — and tax policies were altered to allow yawning loopholes. Corporations that once accounted for a third of U.S. revenues now pay about 10 percent. Support for public schools has been dramatically cut, infrastructure is crumbling and essential research has been curtailed, she noted. From 1935 to 1980, Warren said, 70 percent of all income growth went to 90 percent of U.S. citizens. From 1980 to 2015, the top 10 percent of earners received virtually 100 percent of income growth.

“The new policies enriched the top and left all the rest behind,” Warren said.

Warren noted that the story of America’s middle class is a personal one for her. Her father worked a series of jobs before becoming a custodian to support his family. When he suffered a heart attack and was unable to work, her mother was forced to take a minimum-wage job at a nearby Sears, a move that kept her family afloat. Such a low-paying position would not sustain them today, Warren said.

Today, political gridlock, unchecked lobbying and the Citizens United decision allowing unlimited campaign contributions have kept meaningful reform at bay, she said. “The government works for a small and concentrated number of the very rich and powerful,” she insisted. Warren cited the “revolving door” in which Wall Street companies pay their employees bonuses to secure high-level government jobs and then push for policies that support the self-interests of those companies.

As an example, Warren said corporations are allowed to deduct the full value of CEO bonuses, totaling $55 billion over 10 years. For that sum, the country could, among other things, refinance nearly every student loan in America, fix the water pipes in 68 cities and nearly double the amount of research into cancer and Alzheimer’s disease.

“If we would say our government and our tax system are supposed to work for the 90 percent, then we have the money to do the things that we need to do to build a future,” she said. “And I don’t just mean a future for some of us, I mean a future for all of us.”