Clark doctoral candidate: ‘It is difficult to be Muslim in America today’ 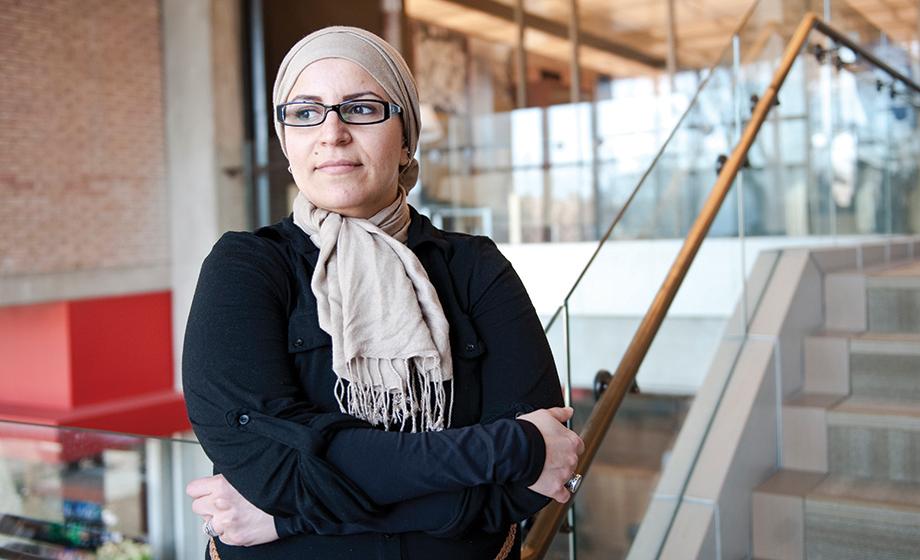 I pushed my seven-month-old son, Malik, in his stroller with one hand while trying to fix my hijab (head covering) with the other. I was at the supermarket on a late Wednesday afternoon buying groceries. I couldn’t help but notice an older man fixated on me.

He is staring at my headscarf. It feels heavy on my head. I wish I could disappear. He is probably thinking I shouldn’t be here. He might even think I’m guilty of 9/11 or the Charlie Hebdo shootings or other inhuman attacks.

I wanted to tell him, “Please don’t hurt me, it’s not my fault.” Instead, I swallowed my incoherent thoughts and carried on. I had never felt so self-conscious. Ever since the horrific Paris attacks of November 2015 I’d been concerned. The dominating Islamophobic rhetoric in the media and in politics led me to ask myself on several occasions: should I remove my hijab? Is someone going to take out a gun and shoot me because I could easily be identified as Muslim? What about all that I stand for and believe in? What about my Muslim identity?

It is difficult to be Muslim in America today. Every time barbaric criminals take innocent lives anywhere in the world, all eyes are on the 3.3 million Muslims of all ages living in the United States. My God and my religion forbid the killing of any human being. “Whoever kills an innocent person it is as if he has killed all of humanity.” (Qur’an, 5:32) Yet somehow extreme violence becomes an excuse for the majority of people in the West to retaliate with blanket statements: Muslims are terrorists, they must apologize. Worse, Muslims are dehumanized, equated with rabid dogs and threatened to be executed with bullets dipped in pig blood. Hate, racism and bigotry suddenly became the norm.

One is then compelled to ask: Why aren’t Muslims asking American citizens to apologize for the Iraq war? Or accuse all Americans of having blood on their hands when WikiLeaks released a classified U.S. military video depicting the indiscriminate slaying of a dozen people in the Iraqi suburb of New Baghdad? Or when Craig Stephen Hicks shot and killed three amazing young Muslims in Chapel Hill? It’s because extreme actions of a few don’t represent an entire population. It is just not right.

The “us vs. them” ideology neither made our world better nor safer. Turning “us” against “them” has definitely helped radical political groups achieve and maintain power as well as reinforce positions of domination and subordination. According to the FBI’s Uniform Crime Reports program, annual hate crimes against Muslims are roughly five times higher than the pre-9/11 rate.

So what now? Do I give up on my faith and let the terrorists win? If I remove my hijab then I am abandoning my voice, my choice and my agency; I am enabling the criminals and the haters to dictate the narrative. If I surrender then I am forgoing Islam’s code of conduct that motivated me to quit my job in the vicious corporate world and join Clark to learn about social justice and social change.

I don’t think so.

I will not allow Islamophobia to threaten my Muslim identity. I will do as my Lord commands: “Repel the evil deed with one which is better.” (Qur’an, 41:34) I will continue to speak up for myself and for my fellow Muslims. To stand up to prejudice with kindness and empathy. To tell the world that there is more to us than meets the eye. Only by being proactive and vocal can we establish the true face of Islam.

When I approached the cashier to pay for my groceries, the same old man was standing in line. He suddenly turned toward my son, smiling, and started playing with him. He asked jokingly, “Does he sleep through the night yet?” I breathed a sigh of relief. There is definitely more to people than what meets the eye.

Hasnaa Mokhtar is a Ph.D. candidate whose research focuses on the intersection of religion, culture, identity and gender to understand gender-based violence within Muslim communities.