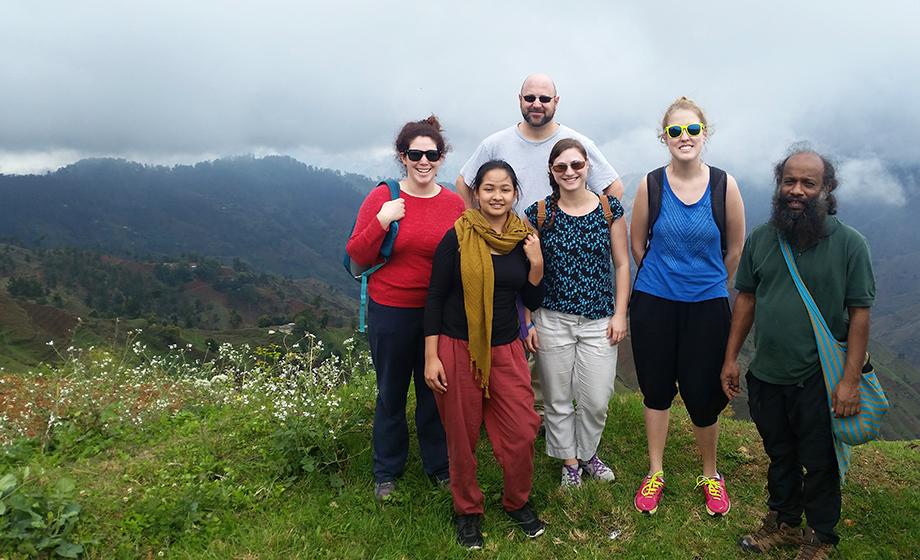 Since arriving at Clark University last fall to study international development and social change, Christopher Owens, M.A. ’17, has traveled to conduct research about refugees in two countries: Haiti and Jordan.

In March, Owens headed to Port-au-Prince with Associate Professor Jude Fernando and five other graduate students to study the impacts of humanitarian and government aid in the wake of a 7.0-magnitude earthquake in 2010 and Hurricane Sandy in 2012.

Three months later, he headed to Amman as a research assistant with Anita Fábos, associate professor of international development and social change at Clark, and her colleague, Cathrine Brun, professor of geography at Norwegian University of Science and Technology. They are focusing on the issues faced by Syrian refugees who have made their way to Jordan.

Owens came to Clark with much life experience. He spent 23 years in the Coast Guard, working in secure telecommunications and later in aviation surveillance. He then worked three years as a curriculum developer for the Coast Guard Academy. He’s been married for 25 years, with two adult children in college.

Below, he talks about how he ended up at Clark, how he’s conducting his research and what he hopes to achieve.

What brought you to Clark?

After working in the Coast Guard on migration/immigration missions, I have become interested in the bigger issues and policies surrounding national security, humanitarian aid and human mobility. Clark is an ideal place to think critically about these issues because the faculty and student body provide global perspectives on these and many other topics.

Can you elaborate on your work in Jordan?

I spent two weeks in Amman with professors Fábos and Brun meeting with people in the Amman area such as Oxfam, World Vision and Jordanian legal assistance organizations. This was very much an international community of experts from France, Sri Lanka, Norway and Canada, to name just a few. It was interesting to hear them define the “truth on the ground,” so to speak, so the two professors could better understand what type of research would be most beneficial. We also visited a Syrian community that has grown outside a camp in Azraq and met a wonderful family who has struggled to integrate/settle/continue with their lives after leaving Syria.

Can you talk more about your research and how it has evolved?

When I applied to Clark, I pitched an idea that asked if the details and drivers of policies are often disconnected from the people who execute these policies “in the field.” I had no ideas beyond that basic theory based on my experience along the U.S. border and throughout the Caribbean. I had no plans on how to approach it, or even if it was a good topic for master’s research. But as sometimes happens in life, things fall into place if you keep yourself open to opportunities.

For [Associate] Professor [Ken] MacLean‘s fall class, “Seeing Like a Humanitarian Agency,” I wrote a series of three policy papers related to the growing number of people trying to escape violence and even slavery in the Central and South American drug trade. I really didn’t intend to get so deep into the topic, but it really is a very dynamic situation that is expanding across multiple national borders.

I was really interested in seeing how Central and North American nations approach the idea of refugees from violence as a distinct population separate from “traditional” economic migrants. This started to make me wonder about the literally hundreds of Haitian, Cuban and Central American migrants I “repatriated” [as a member of the Coast Guard] over the last two decades. Rest assured, it is done in a completely humane manner that involves food and medical care, but does not address the larger and ongoing personal need to relocate out of the country they left. How long before they would try again?

Then, what seemed completely unrelated at the time, I joined Professor Fernando and four classmates on a trip to Haiti in the spring. While there, we learned about the reality of “protracted displacement” from many Haitians who have been living in camps since the 2010 earthquake. We heard some of their personal narratives about how government policies have influenced their decision-making. How can over 100,000 people still be living in camps in their own country [six years later]? When does a camp become a permanent community? How does a government rebuild a country that has historically been one of the poorest in the hemisphere? What kind of aid has caused more problems than it has solved?

Lastly, when Professor Fábos presented the opportunity to go to Jordan, this seemed like an ideal chance to learn how Syrian refugees make decisions about movement to Europe and to other nations. Syrians walk or use boats to escape their war-torn homeland. What waits for them upon arrival in another nation? Why do some want to leave refugee camps and others stay in them? How do social networks help create sustainability? What does being “stateless” mean? Moreover, it was quite an educational experience seeing how research projects are created, relationships are formed and ideas are turned into grant proposals.

Right now, I’m thinking about how each of these very different situations are all creating “protracted displacement.” There seems to be something about how state policies are written with a language that suggests displacement is temporary. If displacement continues, however, how do these policies drive the decisions of displaced populations?

Do you plan to travel more for research?

I’d like to make a trip to the Mexican border or to Haiti again for more data. I plan to use my connections/experience in the Coast Guard as much as possible. At the very least, I’d like to conduct phone interviews with people who work on borders to get their perspective.

What are your goals after graduate school?

Well, like everyone else, I’ll need a job. My wife has granted me this two-year education sabbatical, but I’ll have to return to life as an adult at some point. We are interested in working/living overseas, but are open to any opportunities.