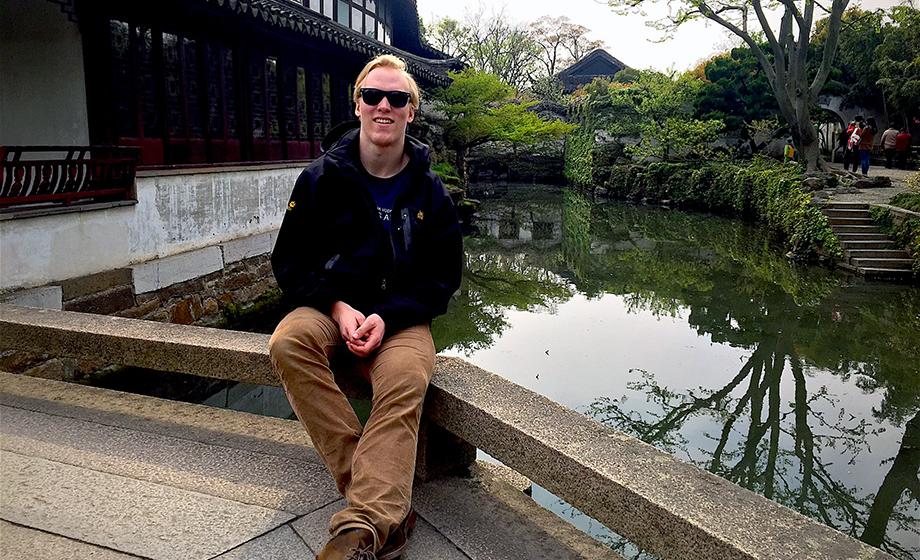 Thomas Hutto ’17 walked into a Chinese 101 class his first year at Clark University. His goal was to complete the language requirement, but he left the course with a passion for a culture a world away from where he grew up and an eye toward incredible opportunities there.

Hutto, an economics major from Louisville, Kentucky, recently won a prestigious David L. Boren Scholarship that he’s using to further his love for the culture by becoming proficient in Chinese. To do that, he’s using the Boren award money to intensively study the language this summer at Yunan University in Kunming, China. During the fall, he’ll spend four additional months studying in Shanghai.

This trip to China isn’t Hutto’s first. He studied there as a Gilman Scholar in spring 2015.

“In the spring of my sophomore year, I decided to test the waters and attend Donghua University in Shanghai,” he says, relating that he studied Chinese and participated in an internship while there. “It was a combination of both experiences (as a first-year student and as a sophomore) that ultimately led me to return to China.”

Hutto is one of 165 U.S. undergraduate students out of 802 who applied to receive a Boren Scholarship during the 2016-17 academic year. An initiative of the National Security Education Program (NSEP), Boren Scholarships promote long-term linguistic and cultural immersion, and provide funding for students to study languages in world regions critical to U.S. interests.

“To continue to play a leadership role in the world, it is vital that America’s future leaders have a deep understanding of the rest of the world,” says University of Oklahoma President David Boren, who as a U.S. senator was the principal author of the legislation that created NSEP as well as the scholarships and fellowships that bear his name. “As we seek to lead through partnerships, understanding of other cultures and languages is absolutely essential.”

The Institute of International Education administers the award on behalf of NSEP. In exchange for funding, recipients agree to work in national security for the federal government for one year after graduation, according to NSEP’s website.

Hutto will apply his language skills to his other academic passion: economics.

“I’m intrigued how economics is a field that pulls from multiple disciplines and is ultimately the study of how different aspects of the world interact,” he says.

He credits the Economics Department at Clark and its “unique focus on international economics and environmental economics,” and how the department encourages getting out of the classroom to learn from real-world experiences.

In addition to his studies, Hutto takes part in Clark’s Chinese English Language Exchange, as well as the Investments and Trading Society and Economics Society.