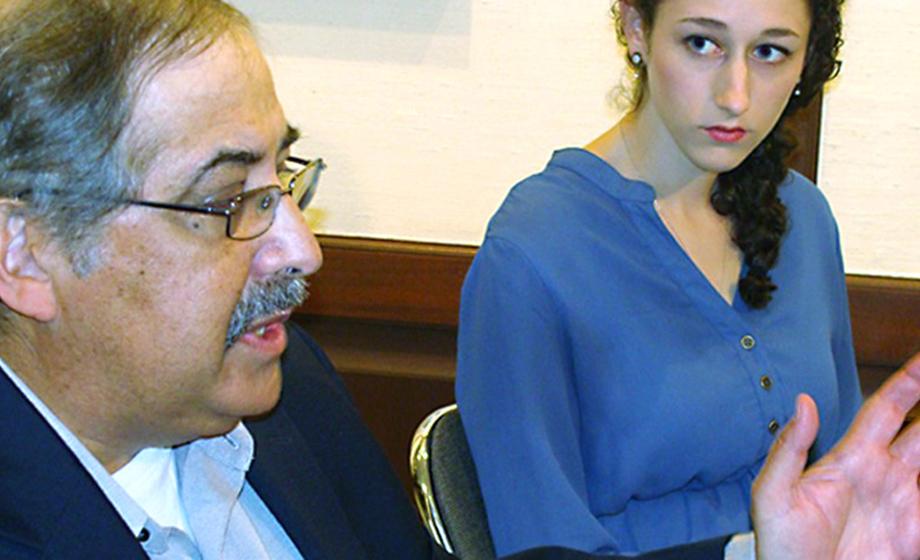 A recent Clark University graduate is part of a research story that has made international headlines: archaeologists’ discovery of a tunnel dug by Jews in Lithuania trying to escape extermination during the Holocaust.

After graduating with a dual degree in art history and ancient civilization this May, Rachel Polinsky ’16 traveled to Lithuania to join archaeologists at a site in Ponar, now called Paneriai. She and five other college students worked with Richard Freund, director of the Maurice Greenberg Center for Judaic Studies and Greenberg Professor of Jewish History at the University of Hartford, and his international team.

“I call Ponar ground zero for the Holocaust,” Freund told The New York Times. “For the first time we have systematic murder being done by the Nazis and their assistants.”

“The Jews that were at the ghetto in Vilna [or Vilnius] were being told they were coming to do work, and so they would bring all their belongings, and by the time they arrived at Ponar, they realized they weren’t leaving,” Polinsky explains. “The Nazis and locals took all the Jews’ belongings and brought them to local stores. The Jews would be placed in a holding pit, brought over to one of these death pits, lined up and then shot.

Eventually, she adds, the Nazis moved beyond the person-to-person approach of Ponar and focused on what they saw as a more “efficient” way of killing Jews and other “undesirables,” through gas chambers.

Meanwhile, as the Soviet Union began moving into Lithuania, the Nazis sought to leave Ponar. They forced 80 Jews to cover up the massacre site by digging up the bodies and burning them. Fearing they would die when the Nazis left town, the Jews used their hands and spoons to dig the escape tunnel over 76 days. They tried to escape on the last night of Passover, 1944, but most were captured. Eleven lived to tell the story.

Over the years, 11 burial pits have been uncovered, as well as the entrance to the tunnel. The archaeologists’ discovery of a 12th pit and the full length of the tunnel, up to nine feet below the ground, will be featured on PBS’ Nova program next year.

“What we were able to do was not only solve one of the greatest mysteries and escape stories of the Holocaust,” Freund told the Times. “We were also able to unravel one of the biggest problems they have with a site like this: How many burial pits are there?”

By the time Polinsky arrived at the site on June 21, archaeologists had discovered the tunnel by using electrical resistivity tomography (ERT) technology, which provides images of what lies below the surface.

“We then used GPR, which is ground-penetrating radar, to go over the area where the ERT was done to double check the results,” she says. “We also used ERT and GPR to look for one of the unknown pits.”

The realization of what had occurred at the site 72 years ago hit Polinsky during a mourners’ ceremony, held one night at the site. “I’m Jewish, so no matter what, this feels personal,” she says.

In an interview with the Journal-Inquirer in Connecticut, Polinsky describes the moment. “I walked up to a pit and I just broke down,” she says. “I started crying out of nowhere, thinking about the torture and horror that the people there had gone through. It overwhelmed me in a single moment.”

Freund also is Jewish, and the two attend the same synagogue in West Hartford, Connecticut. She met him during high school, when she expressed an interest in archaeology.

“I’ve always had an interest in the ancient world,” she says. “We’ve always had big mythology books in our house, and my family is big on Hellenic stories, and all those fairy tales and myths wove into my interest in mythology. In high school, I took Latin, which … made me more interested in the actual specifics of archaeology.”

A high school teacher thought Clark would be a good fit – and Polinsky found that to be true.

“He knew my personality. I’ve have always been very open-minded, and Clark accepts you for your opinions and then it helps you understand them more,” she said. “Maybe he saw that I would fit in well.”

At Clark, she had numerous opportunities to pursue her passion for classical studies and art history.

Her first year, she took the first of many classes with Rhys Townsend, professor of art history. “He immediately he took me under his wing,” she said. After her sophomore year, she joined student researchers on a summer trip to Antiochia ad Cragum, Turkey, to assist Townsend with the excavation of a Roman site.

She also studied abroad in Athens, and as part of Clark’s membership in the Higher Education Consortium of Central Massachusetts, she took advanced classes in ancient Attic Greek language at Assumption College. Last summer, she had an internship at Boston’s Museum of Fine Arts, where she catalogued and organized ancient artifacts.

During her senior year, she was one of 11 students in an art history seminar who helped research and organize the Worcester Art Museum’s exhibition, “Cyanotypes: Photography’s Blue Period.” The seminar was taught by Kristina Wilson, associate professor of art history, and Nancy Burns, the museum’s assistant curator of prints, drawings and photographs.

“That was a really interesting class. I liked that I was pushing myself into an entirely different [area] of art history and at such an intensive level,” she says. “It was very interesting for me to … apply my knowledge of the ancient world to something so modern.”

This fall, Polinsky is headed into Brandeis University’s graduate program in ancient Greek and Roman studies. But her recent experience in Lithuania has her rethinking her academic interests.

“After this experience in Lithuania,” she says, “I was telling my mother that now I really want to go on more of these Holocaust-related excavations to help bring back these elements of people’s culture and lives that were destroyed by such horrific events.”

Pictured above: Rachel Polinsky listens as Richard Freund describes the archaeologists’ discovery in Lithuania of an escape tunnel dug by Jews during the Holocaust. (Photo by Elisa Wagner for the Connecticut Jewish Ledger)