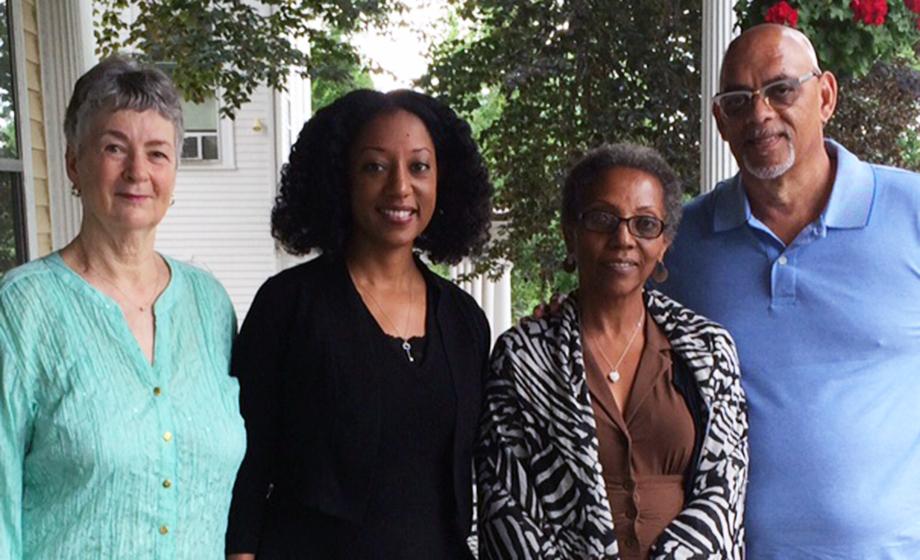 Norman Napier touched on many topics during a recent visit to Clark University’s English House, some personal and lighthearted, some referencing painful national and world current events. But foremost in the conversation was the reason for Napier’s visit: honoring the memory of his brother, the late Clark Professor of English Winston “Tony” Napier.

Norman Napier and his wife, Octavia, were at Clark to deliver a gift from Napier and his siblings, Debbie Napier Bethune and the late Owen Napier, establishing the Winston Napier Endowed Memorial Fund. The new fund supports the E. Franklin Frazier Chair of African American Literature, Theory and Culture, previously held by Winston Napier.

The Napiers met on July 18 with current Frazier Chair Professor Esther Jones, and reconnected with Professor Virginia Mason Vaughan, who chaired the English Department during Winston Napier’s tenure at Clark.

The Winston Napier Endowed Memorial Fund supports Prof. Jones’ work as the Frazier Chair, which includes a range of efforts that will primarily support teaching and research on African American literature, theory, and culture as well as the expansion of other institutional efforts such as the new Africana Studies program, which Jones is directing and plans to launch in the 2016-17 academic year.

“Winston Napier, as the first full-time tenured appointee to the Frazier Chair, created the first and longest-running lecture series offered by the Higgins School of the Humanities: The African American Intellectual Culture Series. It has served for many years to bring to campus Africana scholars of high repute to invigorate and diversify the intellectual life of the Clark community,” Prof. Jones said. “As the inaugural director of the Africana Studies concentration, I hope to build upon and expand Napier’s legacy of deeply engaging the intellectual concerns and contributions of Africa and its diaspora.”

“Students will now have opportunity to engage in a formalized course of study that grapples with the questions and concerns of relevance to black communities across the world, and of which Napier was a serious and committed scholar. The Napier family’s generous gift helps to further this important effort, which is needed now, more than ever, in our present time of racial misapprehension and confusion,” Prof. Jones added.

After the visit at English House, which included a nostalgic visit to his brother’s former faculty office, the group met with President David Angel.

The reason for the gift was twofold, Napier Bethune explained: To honor their brother’s work and its impact and to honor the Clark community’s kindness and caring. “When we were informed that Winston had passed, we came to Worcester, and the reception from [Clark President] David Angel was so thoughtful. He had everything in a folder for us — even references to help with funeral arrangements, making himself available. Our impression was that Clark is just an awesome family. It’s no wonder that my brother adopted it as his family.”

“My brother (Norman Napier) and I decided that we should give something back … deciding finally that supporting the Frazier Chair was the perfect option; instead of a single scholarship, accessed by one person, our gift would serve a group and be more far-reaching.”

Winston Napier taught at Clark from 1995 until his death in 2008. In 1997, with support from the Alice Coonley Higgins School of Humanities, he founded the African American Intellectual Culture Series — an ongoing lecture series that brings prominent scholars and artists to Clark.

“Professor Napier was IT for me. He is the professor who got me into my niche, who got me interested in all of the ethnic/subterranean and all around ass-kicking literature that I love. For me, he was the start, the push,” wrote one alumnus in a special issue of the English Times, published in September 2008.

The special edition collected reflections from many students and alumni. “Put together, they portray a man who devoted himself to the life of the mind and to sharing that passion for ideas and books with his students and colleagues,” wrote then Department Chair Vaughan. “During his time in our department, Winston pushed us to venture beyond the tried and true — by bringing innovative scholars to campus in the African American Intellectual Culture Lecture Series, by incorporating the latest works of fiction into our reading lists, by introducing the latest technology into our classrooms, and by thinking broadly and compassionately about issues of diversity on campus.”