On the road with singer-songwriter Olivia Frances

Clark student brings musical talent, drive to succeed to stages in Worcester, Nashville and beyond
By Erin Shull ’19, MBA ’20 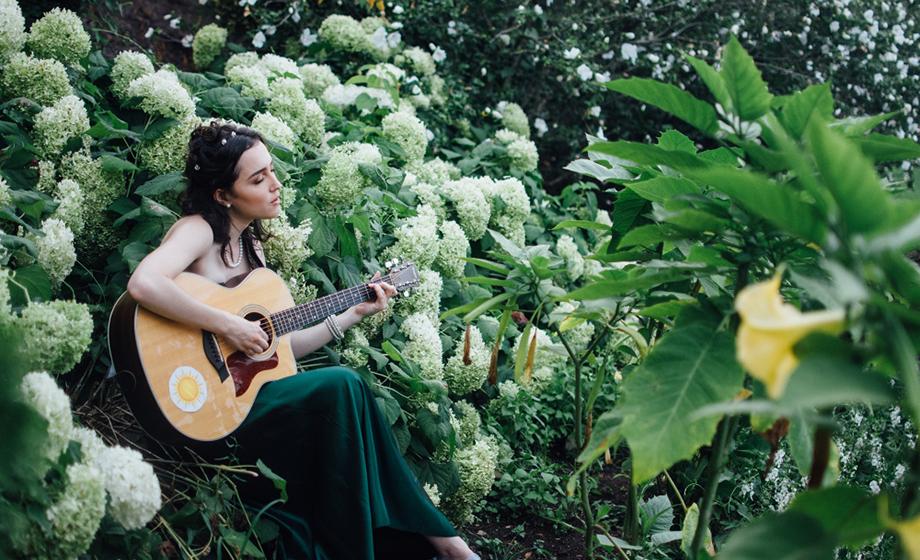 It was just like any other open-mic night at an Italian restaurant in Loveland, Ohio, until then-12-year-old Olivia Schwartz performed her first original song “The Spark” a cappella.

When she left the stage after completing the song, she was met by three guys in cowboy boots and country hats who introduced her to the Nashville Songwriters Association International (NSAI), a not-for-profit professional and amateur songwriters trade association, and invited her to attend their local meetings in Cincinnati.

“I remember that night because my mom and I left, and we were like, ‘This is so cool!’… (but) we didn’t even know what it (meant),” Schwartz said. That night would turn out to be the beginning of her journey as a singer-songwriter.

Seven years later, Schwartz, who performs as Olivia Frances, is now a sophomore at Clark University planning to major in global environmental studies and minor in music. She released a music video last spring to accompany her new song, “Great Blue,” off her second studio album, “Evergreen,” and is touring in Nashville and several other cities this summer before returning to Worcester in late August.

The song came from a conversation Schwartz had with Toronto songwriter Matt Lipscombe, who helped co-write it in June 2015. They talked about driving along the highway and seeing a red balloon floating in the sky.

“There was something about that image that clicked with me,” Schwartz said. “That’s why the opening line is ‘There’s a red balloon rising from a summer breeze.’” The song itself is “about letting go, being free,” and it was Schwartz’s wish that the “free feel of the song (be) embodied in the video.”

Schwartz wrote “Great Blue” and the rest of her second studio album during a gap year spent in Nashville after graduating from a Cincinnati, Ohio, high school. During that time, she recorded at Studio 19, where Taylor Swift, Bruce Springsteen and Carrie Underwood have recorded albums, and performed at venues like the Bluebird Café and the Commodore Grille — popular places to play that have been singled out as hosting some of the best open mic and songwriters’ nights in Nashville.

On her fifth day in the city, Schwartz pitched her music to publishers including Warner/Chappell Music through her NSAI connection. Each aspiring artist submitted a 30-second recording of one of their songs and, one by one, each song was played for the publishers.

“(The whole situation) is nerve wracking because you’re sitting in a room with about 100 people and then at the front of the room there’s a table with the publisher and someone from the NSAI playing the CDs from the boom box,” she said.

After every song the publishers would either “keep or pass” on it. Schwartz was one of the few who had her song “Head to Toe” kept by Warner/Chappell.

“(The producer) kept my song, which is crazy … because it means that I’m at their level,” she said. “I’m just grateful he took my song. Maybe he has it somewhere on his desk, somewhere in a stack of CDs. You never know, maybe I’ll get a call tomorrow.”

At the end of her gap year, Schwartz went on her #SingleSteps tour. During this self-booked tour, she released a song each month for seven months (all from “Evergreen”), and performed eight shows in four states.

“It (was) a lot of work,” she said about her experience, but “I loved being on the road (and) loved playing in places I’d never been.”

Having worked for this opportunity and on her artistic development since she was a preteen, this tour was a long time coming.

“Ever since I was 12, I would go to a (NSAI) meeting and bring 15 copies of my song and hand them out to songwriters in a circle, who would then critique it,” Schwartz said. “(The NSAI has) helped me with the craft of writing; they helped me (by acting as) a support network to write. All those songwriters (have) basically become my family.”

Schwartz is so close with NSAI songwriters that she keeps in touch with them while at school.

Check out Schwartz’s tour schedule, which includes performances in Tennessee, Ohio, Kentucky, New York and Pennsylvania, before returning to Massachusetts for shows in late August.

Schwartz discovered Clark while looking through the book “Colleges That Change Lives” and said it was an easy decision to attend. She deferred admission for her tour and started classes last fall.

“When I visited, I loved the strong sense of community and how the students are so passionate about what they do, whatever that may be,” she said. “Also, I think Worcester is a great place to be because it’s so centrally located, which makes it easy to travel to different places in New England, whether it’s touring or just going on day trips.”

Nonetheless, going from the road back to school was a hard transition. Between Schwartz’s music career, shows, guitar lessons, schoolwork, co-writing sessions, her social life and so much more, she’s still “learning how to balance it all.”

However, it pays off, and she’s propelled to success because of her passion for both prospective majors.

“I really want to combine singing, songwriting, playing guitar with promoting the environment in some way,” she said. “I plan to combine music with environmental studies by having an environmental platform as an artist. For my LEEP project, I’d like to try to make the most environmentally sustainable tour.”

Schwartz is working tirelessly to combine her two passions because she will always be, first and foremost, a musician.

“I definitely see myself in the music industry,” she said, “it’s just so central to my identity, and, honestly, I can’t really see myself doing anything else and falling as much in love with it as I would having a singing career.”