‘There is no syllabus for this’ 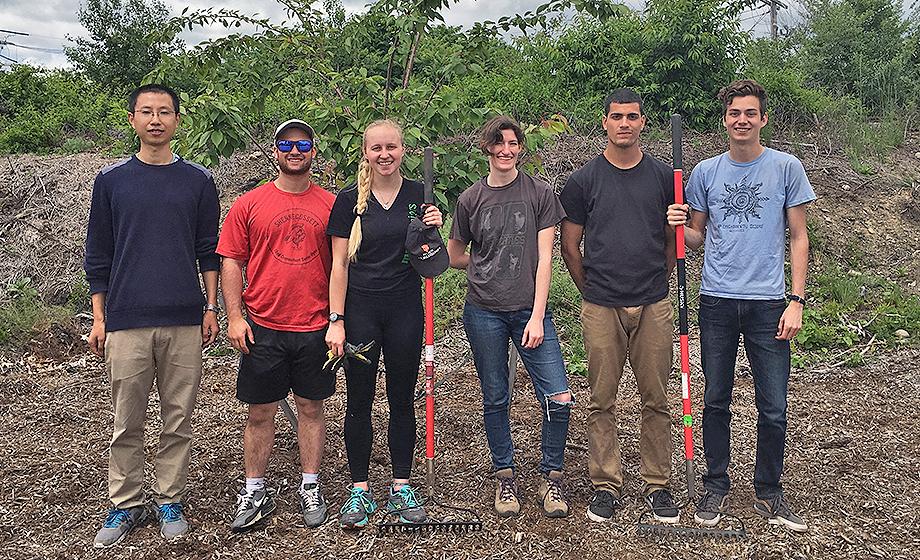 “There is no syllabus for this,” explained Sanford, an environmental science major. It’s not like a typical undergraduate research project, involving “a research paper, and you solely use the Internet, or a lab experiment in class. This was longer and more interactive. We’re the researchers. We’re the ones going out and collecting the data. We met with the DCR [state Department of Conservation and Recreation] and the WTI [Worcester Tree Initiative]. We got interviewed. We got our pictures taken.”

Worcester has the unfortunate distinction of being home to the largest ALB infestation in North America, according to the U.S. Department of Agriculture (USDA). The city first discovered the beetle – most likely imported to the United States in the 1980s via infested wood pallets from Asia – in 2008. To keep the scourge from spreading further into New England and even nationwide, city and state officials removed nearly 35,000 trees in a quarantine area including Worcester and five surrounding towns.

Sanford and four other undergrads ‒ environmental science majors Tyler Anderson ’18 and Eli Simonson ’17 and geography majors Emma Freud ’17 and Rishi Singh ’17 ‒ assessed a sampling of the 30,000 trees replanted on public and private land. They also surveyed area residents who received trees from the DCR and WTI.

Of a sample of street trees replanted by the city of Worcester, 98 percent are still alive, and of those, 91 percent are in good condition, the students told government officials, Clark researchers and community residents at a July 14 talk on campus. The Worcester Telegram and Gazette covered the event.

Remarkably, the street trees – which bear the brunt of road salt, automobile and pedestrian traffic and compact growing conditions – seem to be doing better than the trees replanted in residents’ yards. A sampling of yard trees shows that only 71 percent have survived, and of those, 80 percent are in good condition.

Trees in front yards fared better than those in back yards, perhaps because residents tend to care more for trees that are visible to neighbors and those passing by, according to the students. Some residents admitted that they counted only on rain to water the juvenile replacement trees in their yards. Meanwhile, the WTI waters and tends to street trees when they are young and vulnerable, which is crucial to trees’ long-term survival.

“Stewardship is critical in general, much more than you would think,” Anderson said. “People look around and see a forest and think trees can grow anywhere, but in a city there are so many factors to withstand.”

Two doctoral students in geography – Arthur Elmes and Zhiwen Zhu – guided the undergrads, but “we really self-designed what we wanted to do,” Freud noted. “We had a lot of autonomy in making our assessment and our figures and deciding, ‘This is what we want to talk about; this is what I find interesting.’ ”

The students said they honed their research skills by interviewing neighbors, gathering and analyzing remote sensing and geographic information system (GIS) data, learning new software programs such as i-Tree Landscape, an online analysis tool from the U.S. Forest Service, and working as a team to present their findings.

They also learned more about the city where they attend school. “I was driving around Worcester in parts that I didn’t even know,” Freud said. “This program does a great job of making us feel part of the community.”

For 17 years, the HERO program has allowed undergraduate students the opportunity to conduct research on how community members interact with their environment. Professor Deborah Martin and Associate Professor John Rogan of the Graduate School of Geography currently direct the program, which receives support from Clark’s George Perkins Marsh Institute.

As dean of research and associate provost for 14 years, Nancy Budwig has watched the HERO program evolve and empower Clark’s undergraduate student researchers.

“This will have profound impact on your studies and on your academic identity, helping you enter into a community of knowledge builders,” Budwig told this year’s cohort at the program’s opening reception in May. “This is going to be really important in your next steps and in terms of your career.”

Sanford, for one, already sees the benefits. “It’s great that the Geography Department and the University provide us with the opportunity,” she said. “LEEP gives students real experiences, and the opportunity to talk about it, and share about it and make connections.”