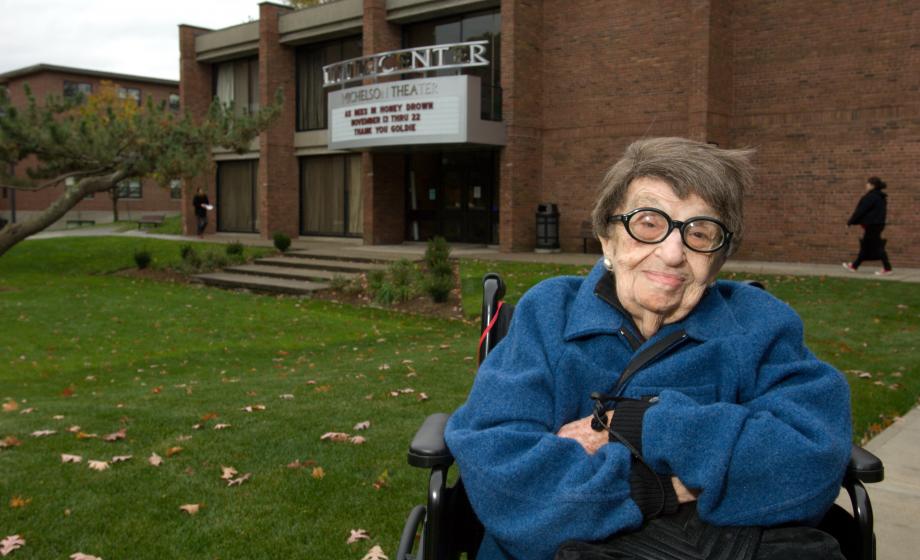 When asked about her longevity in 2012, Goldie Michelson, M.A. ’36, then 110, told CLARK alumni magazine, “It never occurred to me that I would live this long. I just went on, and I’ve loved it.”

Michelson, the oldest person in the United States, passed away last Friday, just one month shy of her 114th birthday. She received much media attention after being given the designation in mid-May.

Michelson, who was born in Russia as Goldie Corash in 1902, developed a love of theater at an early age that continued throughout her life. She endowed the David and Goldie Michelson Drama Fund, and funded renovations to the Little Center Theater, which was renamed the Michelson Theater in 2009.

“Clark never turned me down, never refused me,” she said in 2012 in relation to finding a venue for her productions. “I was always grateful for that.”

Michelson enrolled as a master’s student at Clark in sociology at a time when not many women pursued such degrees. Her husband suggested she return to school (she graduated from Pembroke College in 1924) after she mentioned she “really should get a job or something.” Her master’s thesis, “A Citizenship Survey of Worcester Jewry,” examined the reasons why many of Worcester’s older Jewish residents chose not to pursue American citizenship.

You can read more about Michelson’s life in the 2012 CLARK alumni magazine story and in these articles from The Boston Globe and Worcester Telegram and Gazette.