Steinbrecher, Anton funding helped graduates 'change the lens' through which they view the world
By Jim Keogh 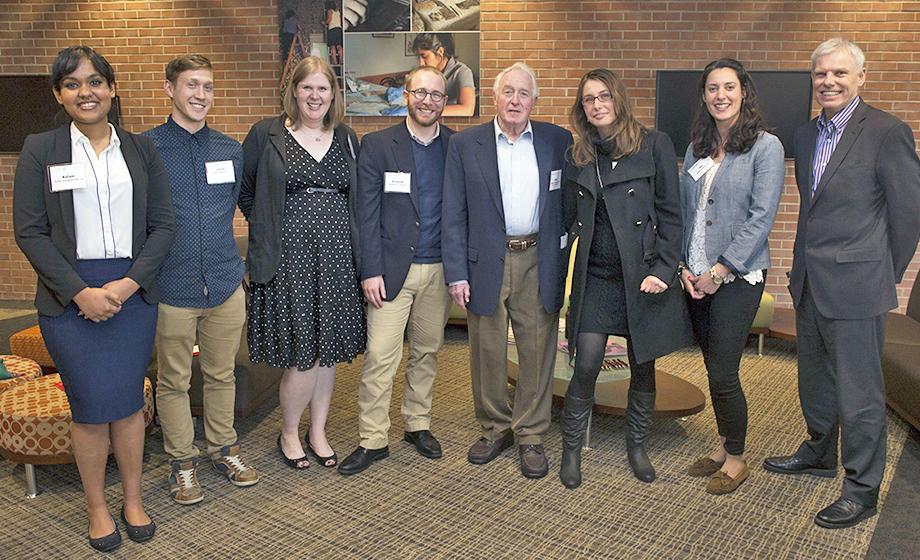 When Ali Canino ’12 saw the campground for the first time, her heart sank.

Due to severe drought, Sioux YMCA’s Camp Marrowbone in north-central South Dakota had not been used in seven years, and it was a disaster. The buildings were falling down, there were no bathrooms, barbed wire was everywhere and the electrical service was “questionable.”

Canino had come to the Cheyenne River Reservation in the summer of 2011 as a Steinbrecher Fellow from Clark University to investigate poverty’s impact on the lives of the reservation’s Native American children. How, she pondered, could this scruffy, desolate place ever give joy to these kids?

She and the team went to work rehabbing. Two weeks later, the first busload of children arrived during a torrential storm that forced the driver to deposit them at the bottom of a hill his bus had no chance of climbing. The children trudged through the “gumbo,” the local term for the clay-like mud, and as they crested the hill and scanned the campground, one of them remarked, “This place is beautiful.” Laughing and shouting, they raced through the raindrops to reach their quarters.

“I knew then that I had to change the lens I was going to use for this experience,” Canino recalled.

She and five other Clark alumni returned to campus recently to share how their Steinbrecher and Anton fellowships had helped them refocus the ways in which they view their lives, careers and the wider world.

Phyllis and Stephen Steinbrecher ’55 established the Steinbrecher Fellowship Program in 2005 in memory of their son David C. Steinbrecher ’81 to give Clark undergraduates an opportunity to conduct original research. The Anton Fellowships were created in 2000 by Tom and Barbara Anton, both Class of 1956, for students to do independent study.

The panelists at the May 7 event held in the Bassett Admissions Center were:

In a wide-ranging discussion moderated by Sharon Krefetz, professor emeritus in political science and longtime director of the Steinbrecher Fellowship Program, the participants recalled their experiences and found clear links to their post-graduate lives.

“When you’re a student, you can’t see how things are connected,” St. Onge said about his writing career. “Now I can look back and see the foundation for what I’m doing today.”

“I started the [fellowship] knowing nothing about how to do anything in the lab,” Nako said, noting that her knowledge of biology had been grounded in textbooks. “I saw I could use my knowledge to find answers to questions no one knew.”

Dias’ fellowship took her into dark places as she researched the ways people have justified atrocities that occurred during the 30-year civil war in her native Sri Lanka. Among the 75 people she interviewed was a girl from the Tamil minority group who marveled that “no one has ever asked me, a woman of the minority, to talk about this experience.” Dias plans to write a book based on her Sri Lanka interviews.

Asked what advice they would give current Clark students, the panelists hit on a variety of themes. Be original in your research pursuits, St. Onge recommended. “If you learn how to think about things differently and originally, that will inform everything you do moving forward.”

Nako urged students to “invest in relationships” with people who will help shape and influence their lives. Take risks and learn to build relationships with a variety of stakeholders, Miller-Cohen said.

Canino advised learning how to “live with humility, and constantly be observing your surroundings.” Dias stressed the importance of collaborating with mentors and learning from failure. “I would not erase any of the failures I had,” she said. “Failures can lead to change.”

Remember to enjoy life amid the “pressure to streamline and professionalize,” Packard said, noting everyone should find time for play and experimentation.

In his remarks, Stephen Steinbrecher (pictured at top, center) urged the alumni to stay in touch with Clark University. “Tell us where you are, what’s happening in your lives and how you can be helpful to us or we can be helpful to you,” he said. Their experiences, he noted, can help inspire Clark students to take advantage of the resources and opportunities the University has to offer.

He thanked Krefetz for her longtime dedication to the program. This was her last year at the helm. Krefetz is passing the baton to Deborah Robertson, professor of biology.