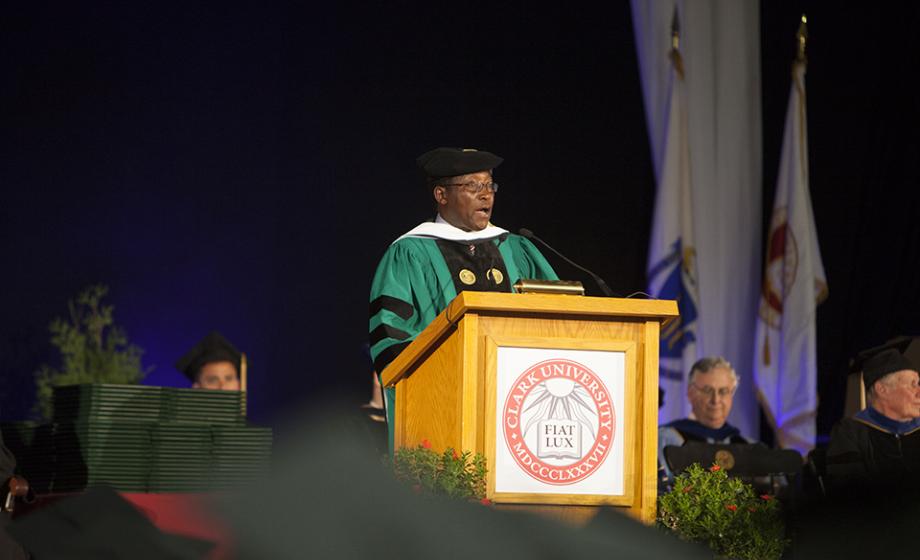 When Francis Lelo, Ph.D. ’94, was a boy in rural Kenya, the local school was seven kilometers from his home. His family had no access to a vehicle, and the teachers punished any tardiness with a smack across the backside with a cane. The clear benefits of punctuality meant that simply walking to school was not an option.

Today, Lelo is advancing Kenya’s higher education system at full gallop as vice chancellor of Laikipia University, a multi-campus university system serving more than 10,000 students in a wide range of academic and professional areas. The one-time farmers-training college now boasts four distinct schools of study (humanities and development, business, education and science, and applied technology), as well as the Institute of Arid Lands Management, which pursues policies and practices that are environmentally and economically sound for this notoriously dry country.

Lelo’s connection to Clark University dates back to 1981, when he was recruited as a research assistant by Clark professor Richard Ford, who was working on a special project for USAID. “Within two weeks I knew this man had something to say, and knew how to say it,” Ford recalls. He notes that in Kenya, leadership roles are typically meted out to people with the most seniority, but the young Francis was so impressive he was soon helming major initiatives conducted by the National Environment Secretariat (NES).

“Sometimes, you don’t know yourself, but others see potential in you,” Lelo says. “You get discovered, and then more responsibilities are given to you.”

Those responsibilities came quickly and often. He traveled throughout the country as an emissary for the Catholic Secretariat, and worked several years for the NES, leading environmental-education efforts in dusty towns and teeming cities. He also earned a master’s in environmental science from York University in Toronto.

In 1990 he earned a scholarship to pursue his doctorate in geography at Clark, and arrived for a four-year stay in Worcester.

“It was a new, very challenging environment,” Lelo recalls. He laughs at the memory of hearing students call professors by their first name “like they were buddies,” a level of informality that would never be tolerated in a Kenyan classroom. Computers, too, were a mystery (he’d never touched one before). But after months of practice, and at least one heart-stopping moment when he thought a major assignment had been deleted within a finicky WordPerfect program, he became proficient.

A stint as a lecturer at Egerton University in Kenya in the late 1980s had stoked a desire in Lelo to enter academia on a permanent basis. He held a series of posts at Egerton, including dean of the Faculty of Environment and Resources Development. Lelo also became the coordinator for Kenya’s Participatory Rural Appraisal, a program developed by Ford and fellow Clark professor Barbara Thomas-Slayter to provide African villages with tools and strategies to improve their lives by doing everything from developing a sustainable local economy to resolving internal conflicts.

In a short period of time, Lelo has overseen a remarkable expansion of Laikipia University, with numerous programming and capital enhancements already on the books and more to come. Among his most notable achievements is the recent opening of the Maralal Campus in remote Samburu County in northern Kenya, a region known for its numerous livestock herds but also infamous for its high incidence of cattle rustling, which sparks periodic hostilities. At the behest of community leaders, Lelo brought Laikipia to Samburu, converting an abandoned livestock breeding facility into a university setting. The campus attracted 600 students, which Lelo is looking to increase to 2,000 in two or three years.

“The beauty is those 600 students are potential cattle rustlers we’ve taken out of the bush,” he says. “If we take more of these fellows away from engaging in cattle rustling, there will be peace in northern Kenya.” Laikipia’s Institute of Arid Lands Management is focusing its attention on understanding the needs and accomplishments of this area’s dryland peoples and creating fresh opportunities for them.

Lelo’s next goal may be his most ambitious. He hopes to leverage Kenya’s reputation for nurturing world-class marathoners into developing the High-Altitude Sports Training and Research Complex, a sprawling facility that would include, among other things, a four-star hotel, golf course, 20,000-seat stadium and sophisticated training facilities for international athletes. Lelo envisions the university as a center of excellence in sports science and a key promoter of sports tourism for Kenya. He’s been hard at work courting strategic partners to help bring the project to fruition.

Last year, Clark University presented Vice Chancellor Lelo with an honorary degree. Richard Ford told the audience that Lelo has “trekked to virtually every part of Kenya and eventually all over Africa to train community-based environmental specialists, work with village leaders, consult with government and nongovernmental organizations, and devise ways that communities could solve their own resource-management needs.”

In other words, he moves fast and he travels far — sprinter and marathoner. Still running.