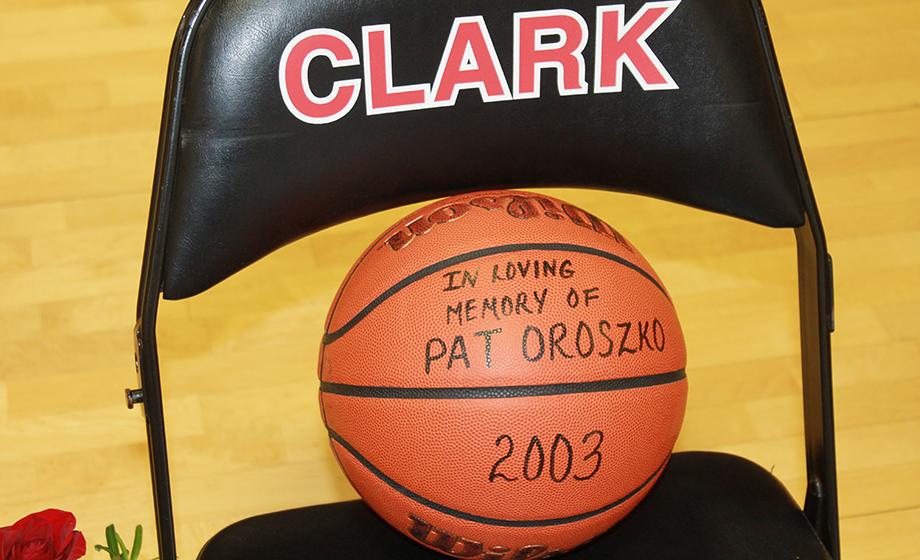 The June 10 celebration of life for Patrick Oroszko ’03 left a gym-full of Clarkies seeing red — lots of it. 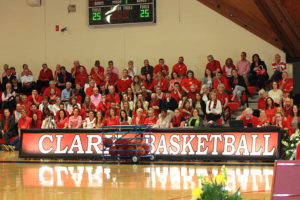 Family members, friends, former teammates, and co-workers arrived at the Kneller Athletic Center decked out in red T-shirts, sweatshirts, hoodies and neckties in honor of Patrick, the onetime Clark basketball captain and assistant coach who passed away on June 5 after a seven-month battle with esophageal cancer. For that morning, the bleachers were a sea of scarlet.

Officiated by assistant coach Michael Burlas, the ceremony produced equal measure laughter and tears as those closest to Patrick stepped to the microphone to recall his love for his wife Courtney Oroszko ’03 and their young children, Allison and Ryan, his loyalty to friends, his passion for Clark basketball, and the joy he could find in a good joke, a beer with his buddies, a country song, or a professional wrestling match. A rack of basketballs had been rolled onto the court, and all the numbers on the Clark scoreboards were set at 25, Patrick’s jersey number.

His mother and father, Linda and Charlie Oroszko, spoke of their son’s impact on those he knew. Patrick had a simple goal in life, Linda said. “He wanted to be a good person. It goes without saying he accomplished that. His generosity of spirit touched everyone he met.”

Patrick’s older brother, Chris Oroszko ’00, infused the event with humor, marveling at Pat’s affection for country music (“How did that happen?”) and poking fun at his own bench-warming days as a Clark basketball player. The basketball community, he observed, rallied around Patrick and his family following his diagnosis. 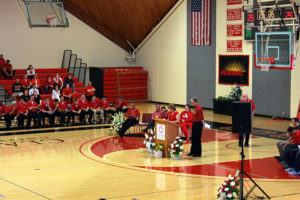 Linda and Charlie Oroszko speak about their son.“At times like these, the idea of a team being a family is very, very real. Just look around,” he said, motioning to the crowded bleachers. “I feel so proud that I get to say Pat was my brother. If I had one half of one percent to do with the man he became, I’ll take that all day.”

Ethan Bernstein, assistant dean of graduate admissions, remembered working alongside Patrick, who was director of graduate student recruitment for Clark. Though Patrick played the forward position on the basketball court, Bernstein likened him to a center in the office, displaying the key gifts of a big man — reliability, balance, focus and unselfishness, all of which instilled a sense confidence in his coworkers.

The testimonials from the Clark basketball community — head coach Paul W. Phillips, former teammates John Ginnity ’01 and Sean Fleming ’03, and former player Nick Da Prato ’14 — brought to life Patrick’s days as a talented player and dedicated coach. Very early in Patrick’s playing career, Phillips took note of his star forward’s lack of footspeed and handed him the nickname Turtle, which was embraced by his friends and teammates. Throughout the June 10 event a light-up turtle sculpture rested on the podium in his honor.

Fleming recounted the added dimensions of the nickname. “Pat was deliberate, never in a rush,” he said. “His calm and collected demeanor was something I always admired. He was able to live in the moment and fully appreciate all the blessings the world provided him.” He recalled Patrick’s sheer toughness toward the end of his life, even playing 18 holes of golf at last month’s Reunion Weekend golf tournament, breathing with the help of an oxygen tank without complaint.

Fleming said Patrick exhibited an uncommon spirit in his final days, never showing self-pity and urging his friends always to remain connected with one another. “His turtle shell was unbreakable, and he put life in a new perspective for all of us.

“His spirit will forever linger in this gym.”

Courtney Oroszko was the morning’s final speaker. She met Pat during their first year at Clark in 1999. “In the past years Pat grew from a classmate, to a friend, to my best friend,” she said. “He gave me my best years.”

She drew laughs when recounting Patrick’s request — which she rejected — that the National Anthem be played at their wedding. But she made sure to grant his wish to have the anthem open the June 10 celebration.

He was “born to be a father” to their children, who adored him, she said. “And while he was such an amazing parent in his life, I know he will continue to be an amazing parent in his death. If there is one thing I am confident of, and I know that Pat was, too, it’s that the amazing legacy of people that Pat has left behind will never let the kids not know, or forget, who their father was.

“Thank you, Pat, for making our lives better, our smiles brighter, and our memories so happy.”

Burlas concluded the ceremony with a reading of the poem “The Dash” by Linda Ellis, which urges people to live life to the fullest. The crowd then observed 25 seconds of silence as the shot clock ticked down and the final buzzer echoed throughout the Kneller.

View more images from the memorial here. An account has been set up to assist Patrick’s family.