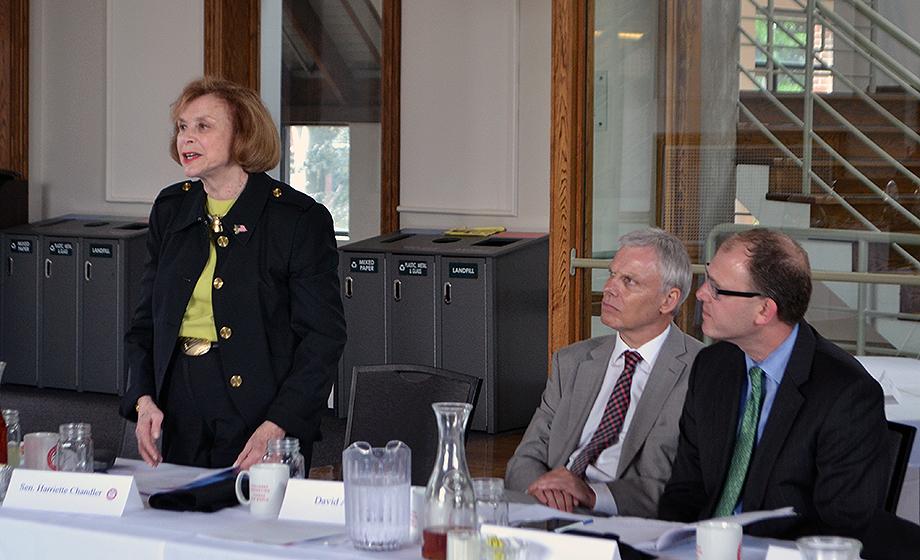 About 40 public health officials, city and state representatives and academics gathered at Clark University this week to celebrate the success of collaborative health initiatives in Worcester – and discuss next steps, including curbing opioid-related overdoses. 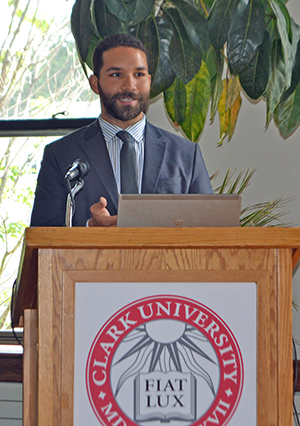 The 2016 Greater Worcester Community Health Improvement Plan will be released June 23. It is a guide for future initiatives and has one overarching goal, according to Zach Dyer, deputy director in the Worcester Division of Public Health (WDPH): health equity.

“What does success look like?” Dyer (pictured) asked those gathered at the lunchtime discussion in Clark’s Tilton Hall. “It means when all people are healthy and the entire community has the opportunity to be healthy. That’s when we can say we have the healthiest community in New England.”

Worcester can reach that goal, according to Dyer and other public health officials, by tapping into the Academic Health Collaborative of Worcester (AHCW), a partnership involving Clark, the University of Massachusetts Medical School, Worcester State University, UMass Memorial Health Care and the WDPH.

The city’s public health officials, for example, want to see opioid-related overdoses reduced 80 percent by 2020, a goal that might seem lofty, “but that’s what a healthy community looks like, and that’s where we need to be in five years. One of the biggest advantages we have is our academic health partnerships,” said Dyer, who teaches the “What is Public Health?” course at Clark.

Over the past year, Clark faculty and students have worked closely with public health, city and state officials to address the Commonwealth’s spiraling opioid epidemic. In 2015, Massachusetts saw 1,379 opioid-related overdose deaths, an 8 percent increase over 2014, and the “estimates for the first three months of 2016 suggest the opioid death rate is comparable to the first quarter of 2015,” the Massachusetts Department of Public Health recently reported.

At Tuesday’s discussion, Samantha Arsenault ’15, M.A. ’16, a research assistant at Clark’s Mosakowski Institute for Public Enterprise, outlined a number of additional WDPH projects – including Worcester’s 2015 Community Health Assessment and a campaign aimed at reducing youth substance use – that received help from 13 Clark interns providing over 2,300 hours of work last summer.

They also worked on tobacco policy reform, which recently resulted in Worcester’s increasing the minimum age to buy cigarettes and other tobacco products to 21. As an undergraduate intern for the WDPH, Arsenault conducted research that examined the demographic and socioeconomic factors of tobacco use among Worcester’s youth.

This summer, the Academic Health Collaborative will fund another round of internship projects, including one that will “map” city and population characteristics for various public health initiatives.

Clark has been involved in the collaborative from the start, choosing to take on health initiatives after successfully working with community partners on housing and education issues in Worcester, President David P. Angel said in open welcoming remarks.

The Academic Health Collaborative demonstrates that “government is critical to the solution but not the only solution,” said James R. Gomes, director of the Mosakowski Institute, which sponsored the lunchtime discussion that drew coverage from the Worcester Telegram and Gazette. Government, for-profit and non-profit organizations, along with citizens, “need to come together … to make our city and state and nation a healthy place.”

Worcester’s health partnerships and initiatives are a “model” for other Massachusetts communities, but more public health funding is needed, said Sen. Jason Lewis, co-chair of the Legislature’s Joint Committee on Public Health.

“Very few of our resources are being put into public health,” Lewis said. If public health were adequately funded, “we would reduce our overall health costs and be able to put more money into education, transportation” and other areas.

“Health care affects us all,” concluded Sen. Harriette Chandler, M.A. ’63, Ph.D. ’73, state Senate majority leader. “If we all work together, it’s a big quilt we’re making. We’re all woven together.”