Reading and riding the Trans-Siberian Railway

Dear reader, Aviv Hilbig-Bokaer is inviting you on a 7,000-mile, six-book literary journey across Russia on the Trans-Siberian Railway.

A rising Clark senior double majoring in comparative literature and international development and social change, Hilbig-Bokaer is spending approximately 17 days on the trip starting from St. Petersburg, Russia reading texts like Leo Tolstoy’s “Anna Karenina,” Vladimir Nabokov’s “Despair” and Fyodor Dostoyevsky’s “The House of the Dead.” His selections are linked to places along the route where he’ll also be exploring archives, libraries and museums in an effort to understand the connections between Russia and its literary canon.

Hilbig-Bokaer’s interest in Russian literature began in spring 2015 when he took Professor Olga Litvak’s Russian Literature and Philosophy class and found himself drawn to how the authors “approach incredibly daunting philosophical questions.”

He’s chronicling his trip across Russia, a LEEP project, in his own words and photos in a blog called “Avivonatrain” and on Instagram. His first posts describe the project, show the texts and direct his dear readers — an address Nabokov uses in his writing — to a New York Times article whose author, Landon Jones, traced Nabokov’s travels across the American West.

“Of course, what Mr. Jones is trying to do is not so unlike my own adventure; part literary pilgrimage, part vacation, part research trip. And so I implore you, dear reader to take a look at this article, if not only for that it is a fascinating read,” he writes.

Hilbig-Bokaer’s journey is already proving to be its own fascinating read. He’s discussed the nuances of traveling across such a huge area as well as Anton Chekhov’s work “The Cherry Orchard” in relation to seeing cherry blossoms transforming the “drab streets of Eastern Germany into something magnificent.”

We’ll bring you selected posts here throughout the summer as he makes his way to Vladivostok, Russia (he expects to arrive early on his 22nd birthday), but follow along anytime at avivonatrain.wordpress.com.

Here’s a sample of what you can expect, taken from his first post: 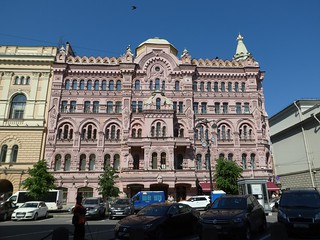 ​“There is an old Woody Allen joke that goes as follows: I took a speed-reading course and read ‘War and Peace’ in 20 minutes. It involves Russia. Once you stop chuckling, dear reader, I implore you to think deeply about what he is saying. Woody, although no force of academic prowess, is in fact touching on something very real. Leo Tolstoy’s famous and, often times, agonizing magnum opus in many respects displays in its 1,200-plus pages all the vastness, uncertainty and incongruities of Russia. This was not lost on me when I first opened it in late 2014 and promptly closed it 10 minutes later. Dear reader, I am the first to encourage diving into the deep end, but when it comes to Tolstoy, I must admit I first dipped my feet with his contemporaries…

“In case you remain at the edge of your seat, wondering, ‘Did he ever finish “War and Peace”?’ I’ll satiate you with a simple yes. Perhaps the last simple answer I’ll give on this journey…”

And with that, dear reader, Hilbig-Bokaer’s journey begins.

Belonging Talks will examine refugee integration through a wider lens