Clark is more than a motto, Gavor tells reunion audience 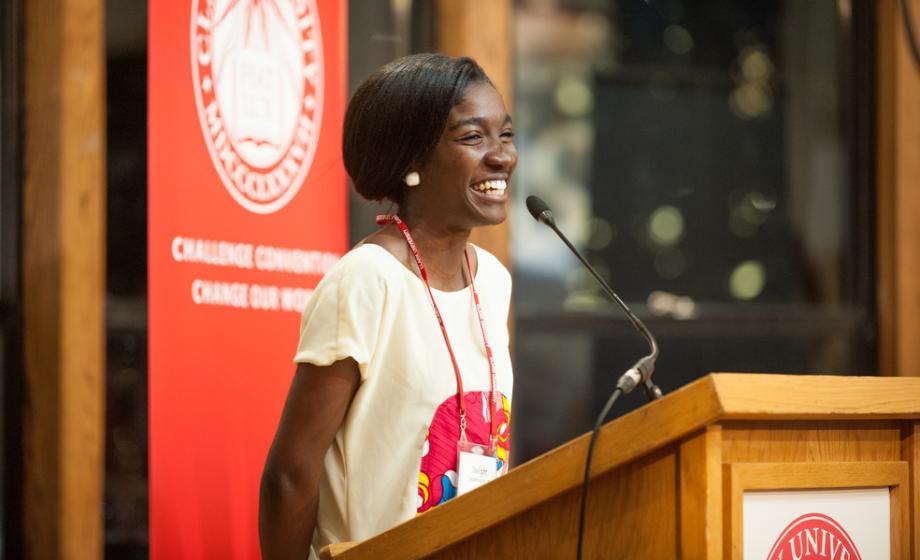 When she was considering Clark, Delight Gavor ’16 was skeptical that the University could live up to its motto, “Challenge Convention. Change Our World.” But her father wasn’t.

“He said, ‘This is the place you should go,’” Gavor told the audience in her featured address at the May 20 Friday Night Dinner, a cornerstone of Reunion Weekend 2016. 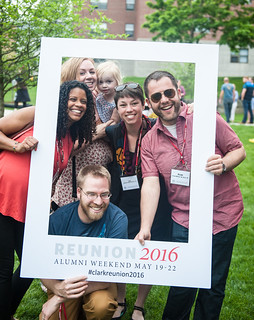 ​Gavor soon found that Clark offered all kinds of opportunities for her to break ranks with convention — and she seized them. With encouragement from her entrepreneurship professor and funding from the dean of students, Gavor co-founded Dormboard, a company that makes a detachable bedside desk that converts into a nightstand.

Dormboards are now being produced in Worcester and marketed to first-year students at Clark and other area colleges.

By sophomore year, Gavor set her sights on a new challenge: transforming the education system in her native Ghana. She consulted with Seana Moran, research assistant professor of psychology, who urged Gavor to turn her ideas into action immediately rather than waiting until after graduation, saying, “That’s how change starts. You start, you fail, you learn, and you keep going.”

In the summer of 2013, Gavor co-founded the Butterfly Effect. In its infancy, the program was designed to help 26 truant youths explore interests and skills beyond the classroom and apply themselves to solve issues in their community. After being awarded a grant from the Davis Projects for Peace, Gavor was able to expand the Butterfly Effect into a year-long curriculum for more than 200 students in two public schools in her home of Accra, Ghana. If successful there, it will be implemented in other districts.

Gavor, who will attend the Harvard Graduate School of Education in the fall, said the Butterfly Effect is her life’s passion. She’s heartened to see her homegrown efforts take hold in Ghana “as opposed to waiting for unknown saviors to come save us from our own troubles.” Four years after arriving on campus, Gavor said, she perceives Clark’s motto “not just as a mantra to sell to students, but as reality in action.”

Following a standing ovation for Gavor, President David Angel noted that Clark is “in the ‘yes’ business.”

“I think you get a taste of what happens when you create a culture at a university where you endorse, promote and create opportunities for students,” he said.

Also at the dinner, Robin Cohen ’06, M.P.A. ’07, was honored with the Young Alumni Award for her professional accomplishments as associate director of annual giving for Boys & Girls Clubs of Boston and for her longtime commitment to Clark. In her remarks, Cohen recalled that as a high school junior making her first visit to Clark, she refused to get out of the car. But she warmed to the place pretty quickly.

“Life-changing moments can only happen when you have the opportunity to spend your late teens and early 20s at a special place like Clark University,” she said.

Shelia McCann ’71 was given the Distinguished Service Award.

A former trustee with a long history of involvement at Clark, McCann enjoyed a 40-year career in management and financial services that included positions in the Clinton administration, publishing, higher education, health care and at Fannie Mae.

“I came alive here,” McCann said of her years as a Clark student. “I learned you can make a difference when you take action, when you engage, when you have a strong belief in what is right and what is just and you act on it.”

McCann recounted her time as a student activist protesting the Vietnam War and occupying the administration building “when we weren’t heard by the president of the university.” That prompted campus dialogues in which students were given greater voice with the administration.

“Here at Clark, I learned I can make a difference,” she said. “I do not believe I would have been able to accomplish any of the things I’ve accomplished in my career had it not been for the opportunities I had at Clark.”

Experience the fun of Reunion Weekend through this photo gallery.