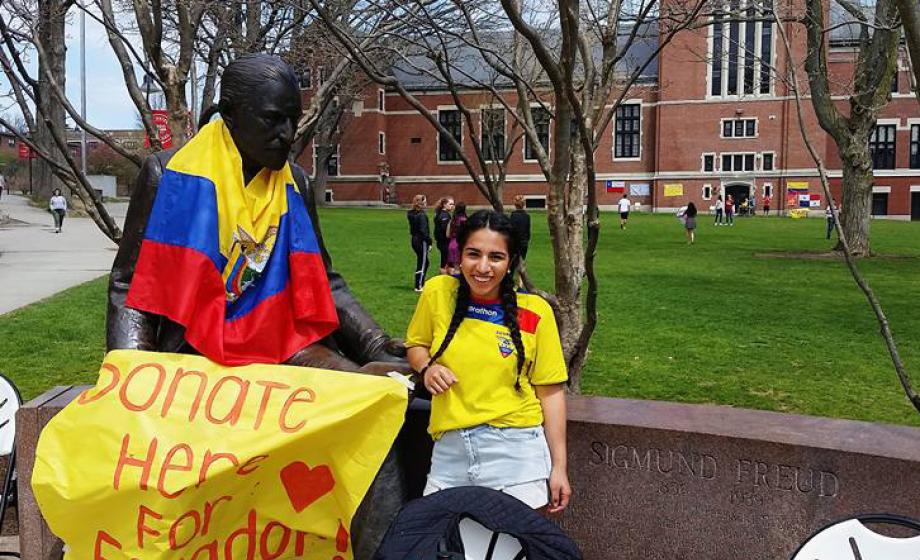 Peaceful candlelight and a moment of silence in Red Square on the evening of April 26 were a world away from the devastation caused by a 7.8-magnitude earthquake in Ecuador 10 days earlier. But there, members of the Clark community — including several Ecuadorean students with families and friends in the country — gathered to show their support for quake victims.

Zabrina Motwani ’17 of Quito, Ecuador (pictured), heads the Latin American Student Association (LASO) at Clark, and, along with Fernando Pinoargote ‘16, also an Ecuadorean student and vice president of LASO, helped organize the vigil as well as a fundraising effort during the group’s annual Carnaval event held April 22. 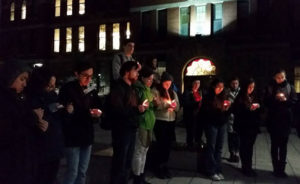 “Being away from home during times like these makes you feel powerless, and I wanted to help in any way I could,” Motwani said.

She first heard about the earthquake in a text message from her mother. At the time, she said, she wasn’t too concerned because quakes are common in Ecuador. But as news about the disaster spread, she became nervous and called her parents to make sure they were safe.

“Once images started going viral on various social media platforms, it hit me how bad the situation really was. I was in complete shock. I couldn’t process how places I have been countless times, places where I had spent most of my summers growing up, were completely destroyed,” she said.

The cleanup continues nearly two weeks later, and although a man was found alive under rubble in the quake zone this week, more than 650 people died in the disaster.

Stunned and shocked by the devastation, Motwani was also heartened by the global response to the tragedy and wanted to get involved.

”People everywhere were helping, and I wanted to do something as well,” Motwani said, noting that the fundraising component to Carnaval was her way of “making a contribution regardless of the distance.” During the event, LASO raised $700, which will be donated to one of a few organizations researched by the group.

“Our focus has been on organizations with a five-year plan, which aids not only the immediate casualties, but also focus on helping people resettle and stand up again in the long run,” she said.

Motwani credits the Office of Student Leadership and Programming as well as the International Student Association for supporting Carnaval and helping attract more people and donations.

“It was a beautiful moment seeing how many people care about situations like these, where they might not even feel as related to, but still show their support by standing with us,” Motwani said.

The Clark community has a tradition of reaching out to help those affected by natural disasters, including relief efforts to help victims of the Haiti and Nepal earthquakes in 2010 and 2015, respectively.