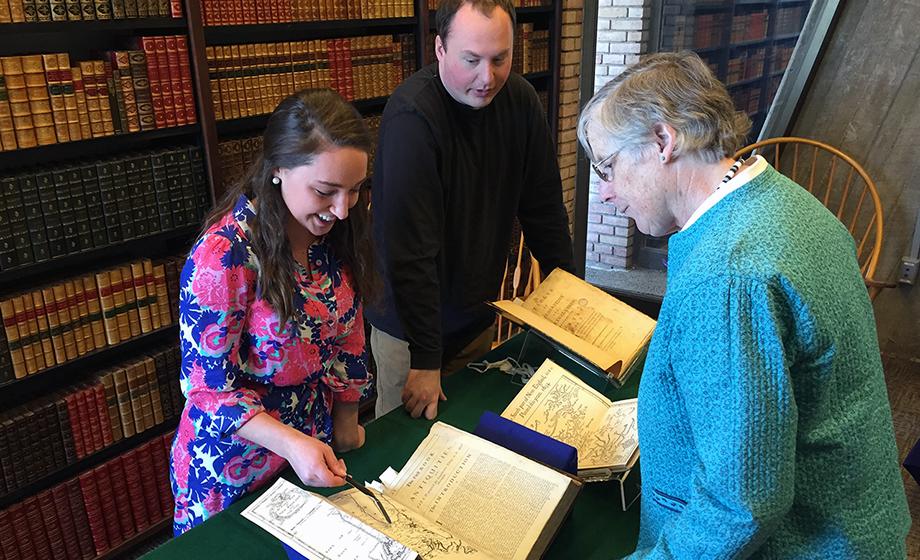 The words “handle with care” take on added meaning in the Introduction to Archival Research seminar taught by Meredith Neuman, associate professor of English, with Clark University archivist Fordyce Williams. The seminar’s students research books that are not just historical in content but also in their physical forms, many of them preceding the invention of the printing press.

Students presented some of Clark’s rarest and most fragile volumes inside the Rare Book Room at Clark’s Academic Spree Day on April 27. The annual event highlights students’ research and creative work across all of Clark’s disciplines.

Anne Marie Goguen ’15 (pictured), who is pursuing a master’s in history, showcased a selection of Clark’s miniature books, some of them no larger than a thumbnail. Among them was an early 20th-century Koran, complete with magnifying glass, that Muslim soldiers carried with them onto the battlefield during World War I. At one time, she noted, the competition was fierce to print the smallest book in the world, with a number of former record holders among the Clark collection.

Renee Robichaud ’16 (pictured) displayed one of the earliest maps of New England, alongside the book “Magnalia Christi Americana”(1702) by Cotton Mather, which told stories from the new colonies (including the tale of the Salem witch trials) and declared their legitimacy as an emerging nation.

“When I came into this course I didn’t know what to expect,” said Rachel Kraytenberg ’17, an English/psychology major from New Hampshire. “It’s one of the most interesting classes I’ve ever taken.”

Kraytenberg described early forms of printing, including relief printing, which involved carving images into a wooden block and stamping them onto a page. She displayed the “Nuremberg Chronicle” (1493) as an example.

Students also presented samples of early pagination, ornate watermarks and illustrated margin notes, such as a hand drawn to point out an important passage on a page.