A noteworthy love of opera 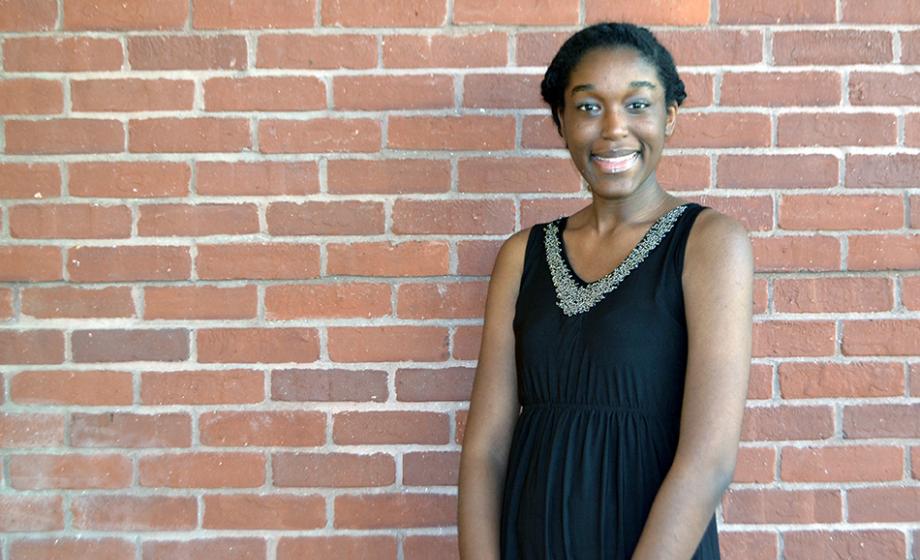 Spring break is usually a week for college students to relax and not think about anything school related. This was not the case for Clark University senior Denisha Brace. 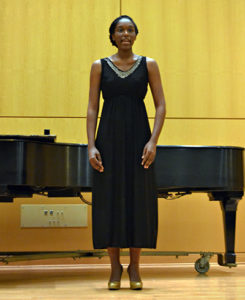 “Spring break wasn’t a break for me,” said the music major, who will perform nine opera songs at her senior recital Sunday in Razzo Hall.

It was during spring break that Brace “had to do the majority of my memorization, translation, mark the score and really dig into the text and find the character.” She said it was extremely difficult “because (the songs are) poetry… you have to not only understand what’s happening in the music, but what’s happening in the song. Then you’ve got to express it to a modern contemporary audience so that they understand it.”

Brace is no stranger to hard work. In addition to majoring in music, she’s also majoring in management and plans on pursuing an M.B.A. at Clark in the fall. And while an M.B.A. and music don’t necessarily seem to go hand in hand, she’s found a way to combine them.

“Management can be seen as something very opposite to music … that doesn’t lend itself to creativity and creative thought,” she said. “But actually, these two majors really do complement each other because, if anything, you can pursue an M.B.A. and use it in service of music.”

After earning her graduate degree, Brace wants to sing with an opera conservatory or work with a young artist program. She’s also considering pursuing her opera career in Germany.

“I would like to land a good position at a great opera company,” she said. “The main purpose of being an opera singer is to entertain, but you do want some stability, which comes with getting into a good house.”

Brace’s interest in classical music started from a very young age. She began playing the violin when she was 9 years old and later moved onto the cello and piano, always with a focus on classical music.

She realized she wanted to pursue voice, opera in particular, in high school.

“When I was 15 years old I was looking for the song ‘Amerilli Mia Bella’ and I found Cecilia Bartoli singing it. I fell in love,” Brace recalled.

After exploring Bartoli more, everything fell into place. “I really wanted to do this,” she said.

Outside of Clark, Brace is a cantor at the Church of Christ the King in Worcester. Her introduction to music was in church, she said.

“My first experience going into music was music as prayer and as a very spiritual thing,” Brace said. “But now, by studying here, I’ve learned that music is more about trying to make a statement or trying to tell a story. You see the work you produce as a service to other people besides yourself.”

Brace is working tirelessly not only on her upcoming recital, but is also recording an EP Christmas album that will feature classical Catholic Christmas songs. She’s also creating a website and building her audition and recital repertoire.

“People in the industry say that you want to have at least five good songs on rotation, so that when you do your auditions you’re prepared,” she said.

A few of the songs Brace will be performing at her senior recital can be used for auditions later in life. Her recital will contain English songs, German art songs, French melodies and Italian arias.

“The first thing that goes into choosing a song is ‘Do I like it?’ because if you don’t, you’re not going to have the energy to work through it,” she said. In general, you want to make sure a song fits in your range and brings out the best quality of your voice.”

Choosing the songs is just the first step in the process. All the music then needs to be memorized.

“I start with the rhythm and then I’ll add the music,” Brace said. “After that, I’ll translate the words and then go back and combine what I did the day before.”

The performance will be grouped by language with older songs sung first.

Although it’s been difficult, all of Brace’s hard work will pay off in the end. After the performance, she’ll have material to post on her upcoming website that she can use to market herself to potential employers.

Stop by Razzo Hall on April 24 from 3-4:30 p.m., where three graduating music majors will present their capstone performances, on cello, guitar and a vocalist, with repertory ranging from baroque and folk to 21st century. Brace will close the show with her 30-minute vocal segment.